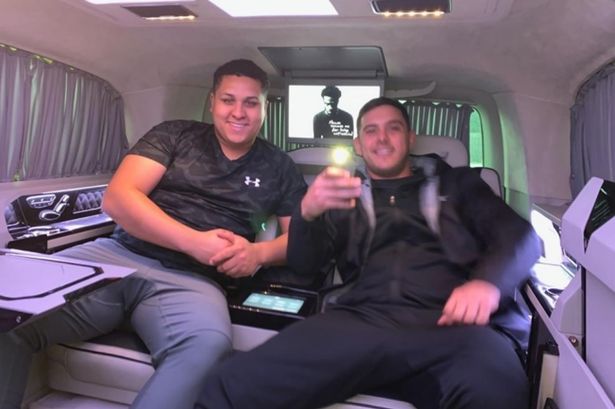 A “polite, young man” has been unmasked as a drug dealer who flashed luxury Mercedes cars.

Remez Caffrey, 24, sold drugs under the name “FrostJacket” with his co-defendant John Chean, 33.

The pair ran a huge cocaine and amphetamine operation and were found using the handle to sell the drugs while sharing pictures of a lavish lifestyle.

In one exchange, they admitted to another user that the account was used “for work”, the court heard.

And in another, they arranged to meet a man to trade a 20 plate Mercedes for 18kg of amphetamine in Moston, Manchester.

Caffrey and Chean have now both been jailed for a total of almost 20 years.

Minshull Street Crown Court heard that both were using the handle ‘FrostJacket’ to buy and sell cocaine, amphetamine and cannabis throughout the UK.

Remez Caffrey, 24, from Moston, was jailed for 11 years and three months after pleading guilty to conspiracy to supply class A and B drugs and conspiracy to import class B drugs
(

Prosecutor Lucy Wright said: “There were two messages between ‘FrostJacket’ and an account called ‘MafiaTies’, with the latter account asking: ‘Is this yours or do you share it?’

“FrostJacket replied: ‘No, it’s mine and Rem, obviously we use it for work.'”

The prosecutor said that ‘Rem’ was a reference to Caffrey.

The handle was used on an almost daily basis between April 2020 and March 2021, and was in contact with numerous handles over the Encrochat network.

The prosecutor said it was clear the pair were able to obtain “large quantities” of drugs and move them, with both defendants acting as purchaser, supplier and even middlemen.

Ms Wright detailed several conversations between ‘FrostJacket’ and others.

She said: “On April 7 FrostJacket was discussing the sale of a Mercedes with a handle called ‘Jessie Pinkman’, namely 18 kilos of amphetamine in exchange for a Mercedes.

“FrostJacket explained they were able to get amphetamine for £1,000 per kilo.

“On April 8, FrostJacket and Jessie Pinkman arranged the pickup of the Mercedes and the amphetamine, and 17 kilos of the drug was received by the defendants.”

There were then messages suggesting an onward sale of the drug.

Other discussions between FrostJacket and another handle spoke of the sale of a kilogram of cocaine worth £40,000.

Days later they were discussing with ‘Jessie Pinkman’ about sending 200 kilos of amphetamine to Scotland, and keeping one kilogram for ‘testing’.

Then on April 20, they were discussing with handle ‘MightyRay’ about a large amount of cannabis for sale, with Caffrey and Chean suggesting they had connections in Holland to get some of the class B drug for £5,300 per kilogram.

This suggested they were not only dealing drugs domestically, but also able to obtain drugs internationally, Ms Wright said.

“There was also a discussion between FrostJacket and BabyAssassin about looking for trackers and listening devices that could be used by law enforcement. This showed they were sophisticated in respect of the understanding of deception of law enforcement.”

Warrants were executed at Chean’s address in Liverpool, with officers finding £2,920 in cash, a snapbag of white powder, digital scales, and a receipt for a Cartier watch.

The prosecutor said Caffrey was a “senior partner” and played a leading role in the organizing, buying and selling of drugs on a commercial scale.

He was said to have two convictions for nine offences, including possession of class A drugs when he was a juvenile.

Chean was said to have previous convictions for 32 offenses including possession with intent to supply class A drugs.

Mitigating for Caffrey, Daniel Travers said his client has never served a custodial sentence and will be away from his family for the first time.

Mr Tavers said: “Clearly there were others involved at a higher level. He is described as a senior partner – he was 22 at the time of the indictment.

“His family describes him as being a nice, polite young man from a supportive family.”

On behalf of Chean, Damian Nolan said: “He accepts he was involved in one-ninths of the sale of drugs.

“It’s his own fault he is in prison, but the fact there is regret suggests there has been punishment suffered already.”

Sentencing them, Judge Elizabeth Nicholls said: “What is of importance is that you were involved in the purchase and onward supply of drugs.

“It was also revealed by the messages that you had a high awareness of police detection and could avoid detection.

“It is accepted by your basis of plea that you, Chean, were involved as a junior partner and had a limited role.

“It is clear you were expecting substantial rewards.”

Caffrey, of Chelston Avenue, was jailed for 11 years and three months after pleading guilty to conspiracy to supply class A and B drugs and conspiracy to import class B drugs.

Girl, 5, in A&E with ‘stinging’ eyes after WaterWorld visit – as family demand refund

Chean, of Kirkby, was jailed for eight years and six months after pleading guilty to conspiracy to supply class A and B drugs.

Detective Constable Darren Wayman of GMP’s Organized Crime Coordination Unit said: “Today’s sentencing is a significant result for the team after months of gruelling and intricate investigative work to help identify, arrest and convict these two high-ranking members of an OCG.

“Both Caffrey and Chean were responsible for the purchase and importation of huge quantities of drugs which would no doubt have been distributed across Greater Manchester before being sold within our communities.

“These types of drug blight communities and ruin lives and thankfully we have been successful in disrupting this type of destructive criminality.

“Drugs are not welcome within our community and we will do all we can to pursue these types of criminals and ensure they face the appropriate justice – which today is a substantial time behind bars.

“Our investigations do sometimes rely on intelligence provided by the public so I would encourage anyone who may have information into this type of activity to get in touch with police as soon as possible.”