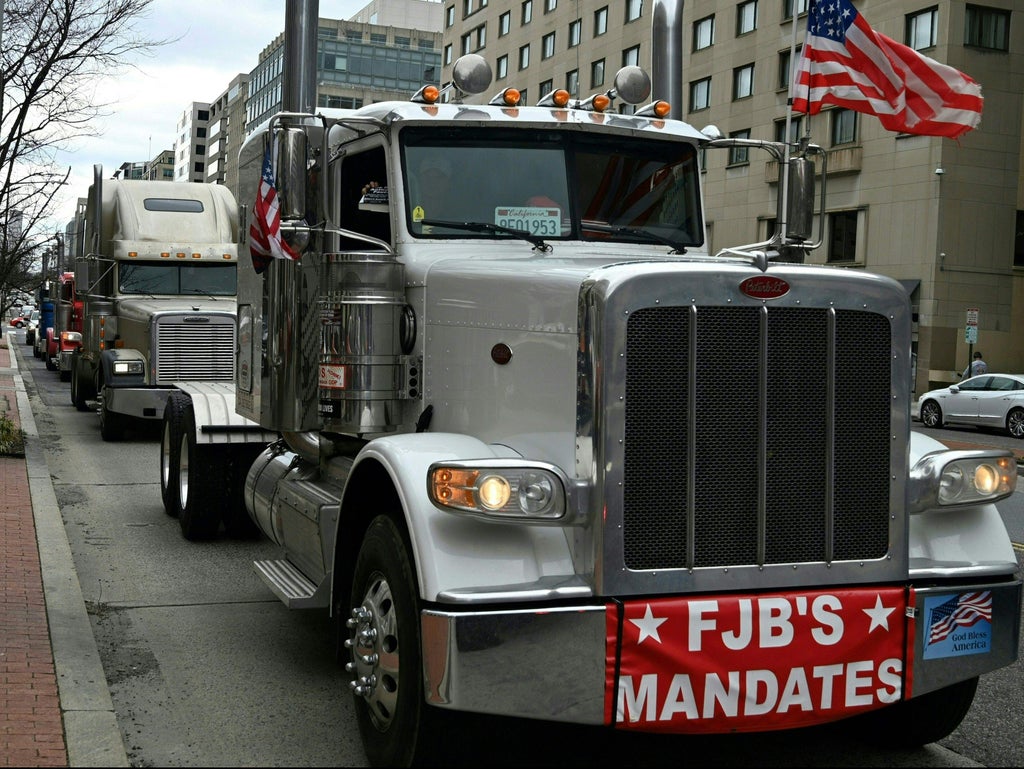 The incident is reported to have taken place on Sunday as the convoy made its way through downtown DC.

An incident report stated that Kerry Lynn Bedard, of Dupont Circle, told police that she was walking down the west side of Connecticut Ave NW “when [the convoy member] struck her with his vehicle and drove on top of her right ankle”, The Daily Beast reported.

The member of the convoy, Donald Bryan Thomas II from Butler, Ohio, was driving a silver BMW with stickers stating “Truckers Rule!” and “[Mainstream media] lies!”

He told police that he was “driving forward slowly when [Ms Bedard] walked into the street and in front of his vehicle while yelling and then laid down in the roadway”.

“The lady went between the cars as her own form of protest yelling at them and said the driver of the BMW was at a full stop and then hit the gas (low speed but enough to knock into her),” an eyewitness told the outlet .

“She was much older and had trouble standing up,” the witness, a DJ from the area who wanted to remain anonymous, said. “I went over to see if she needed help or water or something, and he [Mr Thomas] was yelling at her to ‘get the f*** up.’”

Ms Bedard told The Daily Beast on Monday that she was “assaulted with a deadly weapon.”

“It was a car that was in that convoy of truckers,” she added.

Ms Bedard told the outlet that she was struck “intentionally” and that she has “two broken bones” in her leg. The convoy member appeared to claim that she walked into her vehicle.

“I have two witnesses that saw that [Mr Thomas] was at a standstill for quite a while, and the convoy was not moving,” Ms Bedard said, “while” she was “trying to get his attention to open the window,” to speak about not disturbing a “peaceful neighbourhood”.

Zack Bushnell, the driver of a pickup truck in front of Mr Thomas’ BMW, posted a video on Facebook of the aftermath of the incident, writing: “This lovely DC resident screamed [at] me in my window … Then decided to lay down in the road and fake an injury by the car behind me. The police and EMS crews definitely did not buy her story from her. Poor soul, I hope she sees Jesus in her life from her.

In the video, the truck driver appeared to be speaking to the driver of the BMW, saying that “she was standing next to me when we were by and she ran right behind you to lay down”.

She then seems to tell somebody on the phone: “I was just hit by a car on this stupid f****** convoy on Connecticut Avenue, I’m waiting for the police.”

When a man offers his assistance to Ms Bedard, she says: “I’m not refusing treatment. I said I’m not doing anything until the police get here.

“I don’t want to take my shoe off yet, okay? I’m not taking my shoe off, I’m not doing anything until the police get here,” she adds. “I was standing here and he had to back off to get my foot out. That’s not my version, that’s the truth.”

“I was just hit on Connecticut Avenue by this convoy,” she appears to tell a law enforcement official on the phone. “I was standing here, then this man pulled up and hit me. I’ve got a witness here and I need police immediately.”