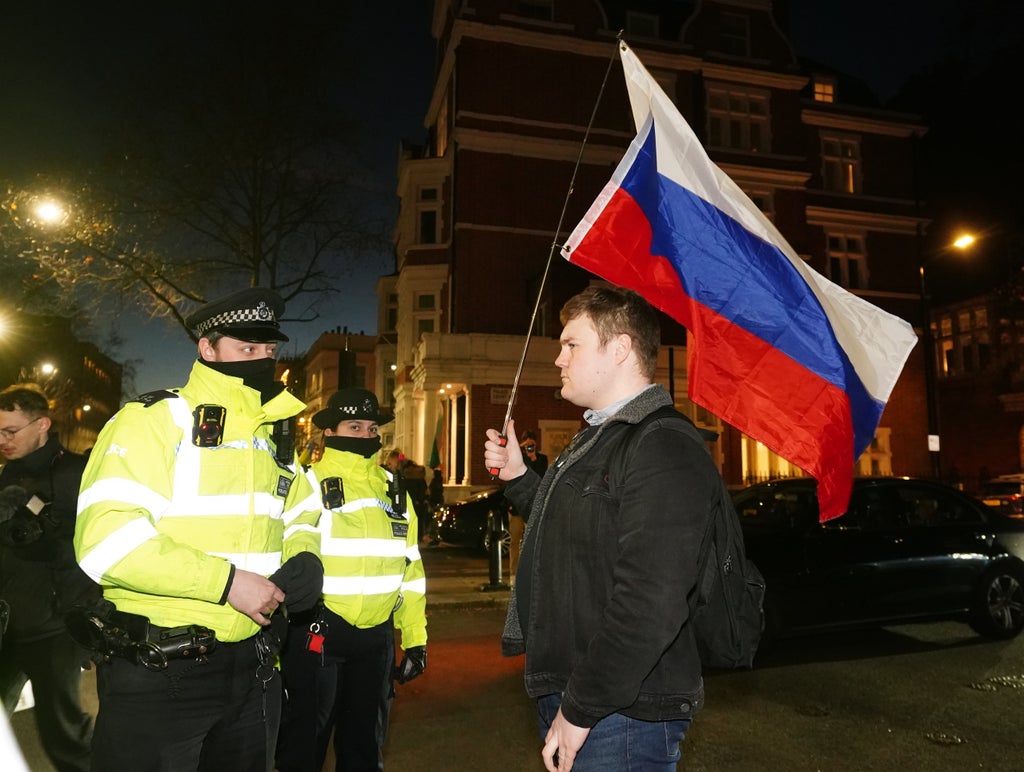 Police have intervened during Ukrainian protests in London as paint was thrown and a counter-protester with a Russian flag was almost punched.

Hundreds gathered outside the embassy in Kensington and at Downing Street on Saturday afternoon to call for Vladimir Putin to withdraw from Ukraine.

Even the building itself appeared to have egg stains and cracked shells on it.

A man also rode past on a bike and threw paint at the wall at just after 3:30pm.

A Metropolitan Police spokesman said: “Inquiries are ongoing and no arrests have been made.

“The incident was not connected to a protest that was taking place outside the building at the same time.”

A few hours later, a man holding a Russian flag was almost punched.

The man, who had an English accent, stood across the road from the Russian embassy and was confronted by a number of protesters.

As police urged him to leave, a woman who was visibly angry shouted: “People are dying how can you support him?”

She raised a fist and swung her arm towards the man before police intervened.

The man put the flag away and left before returning a short while later.

A few officers stood around him as angry passers-by shouted at him.

Police could also be seen stopping and searching another protester.

Dozens of people were there wearing flags tied around their necks and holding flowers.

Protesters encouraged motorists to beep their horns in support, while a woman could be seen pressing the building’s intercom.

A protester, named Viktor Shevik, 52, told the PA news agency: “I’m disgusted with the actions of this dictator, this bully, this embassy needs to hear our message.”

Mr Shevik, who has lived in west London for 16 years after moving from Kyiv, added: “I worry for my people, we are brave people but Russia is a big country and it is raining bombs on children.

“I hope the soldiers and people of Russia understand they do not need to fight for this maniac.”

Helena Kovalenko, 33, originally from northern Ukraine, said: “I’m so angry with Putin for invading my Ukraine.

“I have family there, my mum and dad, and I’m so scared for them.”

Ms Kovalenko, who has lived in the UK for nine years, added: “I’m here today to call for this country to help – Putin has to go.”

Another protester originally from the country, named Andriy, 27, said he was there to call for other countries to “do more”.

He said: “The world can’t watch as my people suffer – Putin is a Barbarian, he’s an animal.

“If sanctions don’t stop him, the UK, the US and Europe must be prepared to do everything.”

The crowd, which blocked a path outside the embassy, ​​shouted “down with Putin” and held posters comparing the Russian leader to Hitler.

Some had tears in their eyes, while others were visibly angry as dozens of police officers watched on.

One man who had been chanting and moving among the crowd was stopped briefly by officers.

Another protester said he was there to “stand in solidarity” with Ukraine.

A banner, held above the crowd, had “stop bombing my family” written on it.