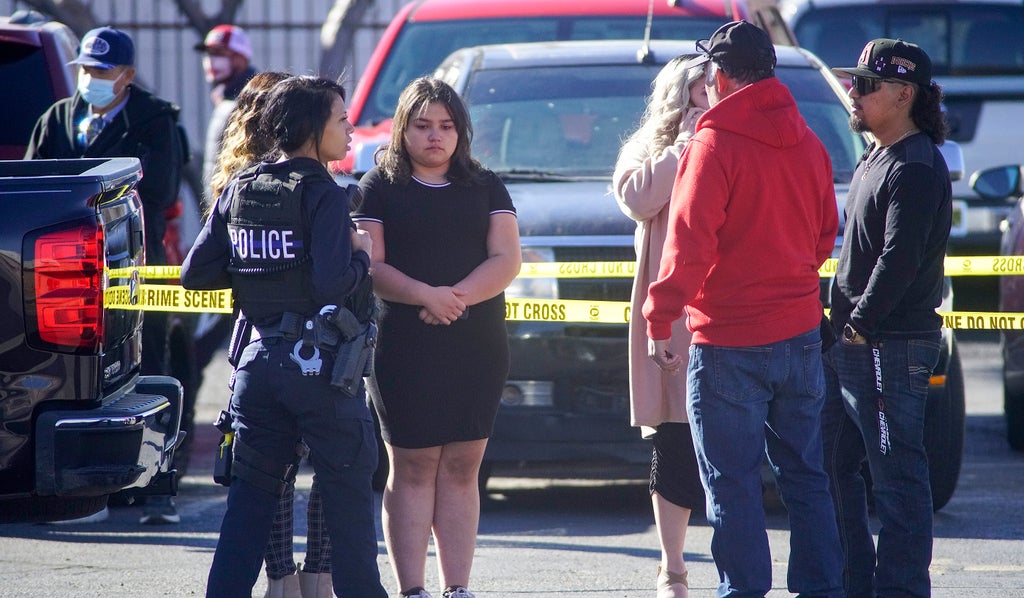 Police in Albuquerque arrested a man suspected of stabbing 11 people as he rode a bicycle around the city over the weekend, leaving two victims critically injured, authorities said.

The suspect was identified as Tobias Gutierrez, a 42-year-old man with a criminal history that includes felony offenses that range from burglary to battery and possession of a controlled substance.

He was booked into jail on charges of aggravated battery with a deadly weapon, police in New Mexico’s largest city said in a statement Monday. Booking documents said he was homeless.

The stabbings appeared to have been committed at random within hours along Central Avenue, one of the city’s main thoroughfares. One of the crime scenes included a homeless encampment and another was near a smoke shop where the suspect asked a victim for money and yelled obscenities before swinging a knife, according to a criminal complaint.

“There doesn’t seem to be any rhyme or reason” to the attacks, said police spokesman Gilbert Gallegos.

There was no immediate information on whether Gutierrez had a lawyer who could speak on his behalf.

New Mexico court records show Gutierrez also had been charged over the years with drug possession and driving while intoxicated.

In 2014, Gutierrez failed to appear in court for driving on a revoked license, records show. He responded to the court with a handwritten note saying that he was in federal custody in another county and that he was making an effort to better himself while incarcerated.

His federal prison sentence stemmed from a case in which he entered a tribal casino north of Albuquerque while carrying a revolver and ammunition.

Authorities said Gutierrez got into an altercation with a casino security officer, dropped the revolver, got into a vehicle and led police on a chase through a suburb until he crashed and was found hiding.

Records show he was released from federal custody in 2020.

Sunday’s attacks began around 11:15 am, when officers responded to a crime scene downtown and found a man suffering a laceration to his hand. About an hour later, another call came in about the stabbing outside the smoke shop near the University of New Mexico a couple miles away.

Police were called to two more stabbings along Central Avenue over the next two hours before another call came in at 2 pm about a man trying to stab people outside a convenience store. Arriving officers found two victims with neck wounds.

Within the next 20 minutes, two more calls came in — and the final one involved a victim stabbed outside of a restaurant along another busy street less than a mile away.

The witnesses identified a man on a bike armed with a large knife.

According to the criminal complaint, an officer saw a suspect who fit the description and saw him toss something into a trash can before the officer stopped the suspect. A search warrant was issued and a knife was found.

The victims were taken to different hospitals and while two suffered critical injuries, all of those hospitalized were in stable condition, police said. Some were treated for their injuries and released.