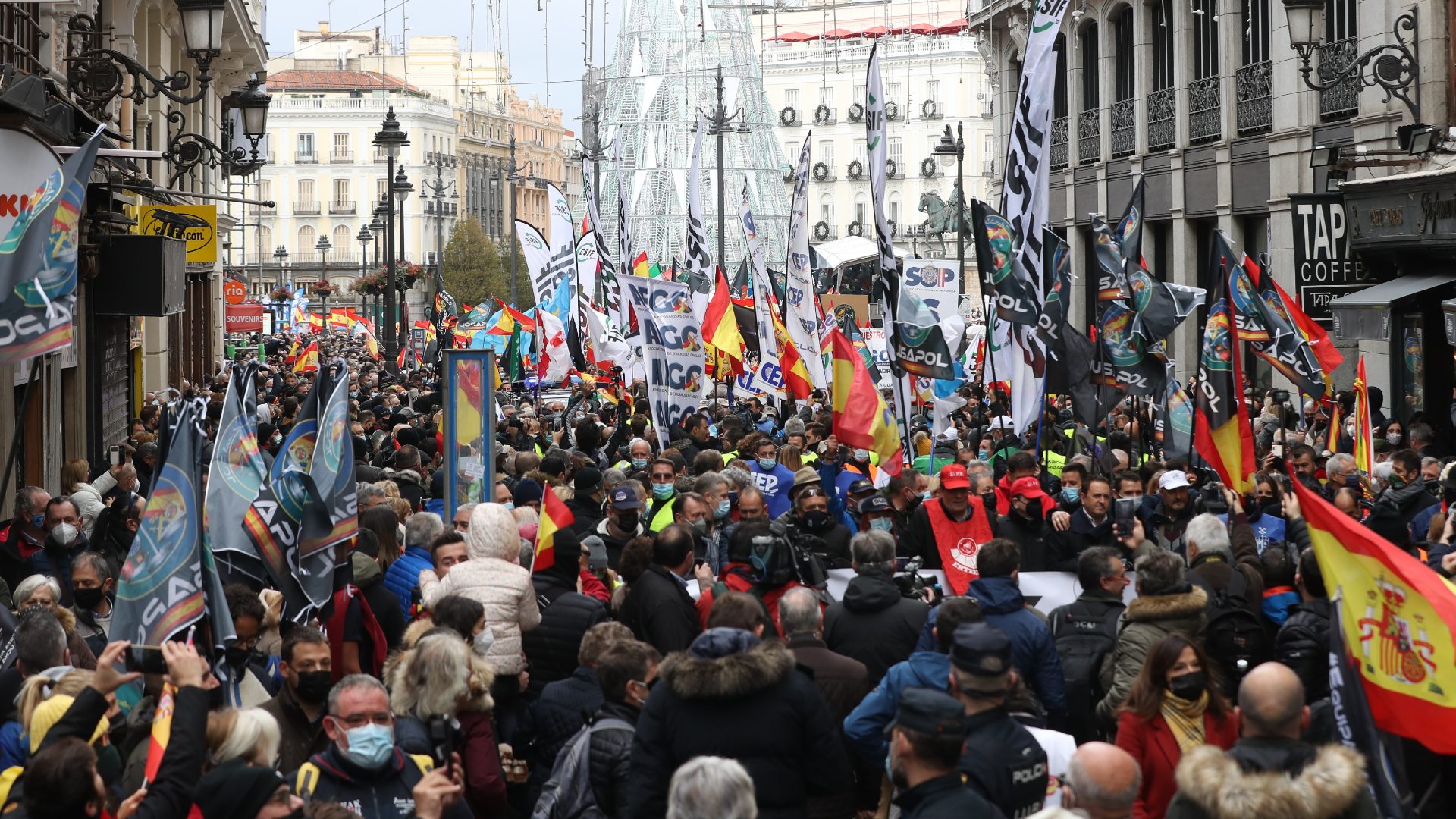 Tens of thousands of National Police, Civil Guard and local police officers have demonstrated this Saturday in Madrid against the reform of the Citizen Security Law – known by its detractors as ‘gag law’ in a march that has the support of leaders of the Popular Party, Vox and Ciudadanos. According to the organization, some 150,000 people have participated in the protest, while the Government Delegation lowers the figure to 20,000.

The march, called by the Jusapol police union, has passed through the center of the capital of Spain under the slogan “No to citizen insecurity” and it has had the backing of some 40 police organizations. The demonstration, which passed in front of the Congress of Deputies, took place without incident, in a unpleasant morning from the cold and the rain and it has concluded in front of the Ministry of the Interior.

During the journey, amid applause from the citizens and shouts of “Long live Spain”, “Long live the Civil Guard” and “Long live the Police”, the participants have launched slogans against the Government and Pedro Sánchez and calling for the resignation of the Minister of the Interior, Fernando Grande-Marlaska.

The organizers criticize that the reform, which is in the parliamentary process, supposes an attack on police forces and public security and, as they have assured TVE, it leaves them “at the feet of the horses” and puts their physical integrity at risk. In addition, they consider that it limits their operation against violent people and will not facilitate curbing violence in the streets.

“We believe that the law must be adapted to current times and must be reformed, but that the rights of the guarantors of security, of the specialists who operate with this law on a daily basis, are never trampled on,” said at the beginning of the march the President of Jusapol, Miguel Gómez, who has warned of the “citizen insecurity” that can be generated with the planned reform.

Ayuso does not match Casado

The president of the PP, Pablo Casado, who joined during the protest after participating this morning in an event in León, has asked the Chief Executive, Pedro Sánchez, to “listen to the street and the thousands of agents who have risked their lives to defend democracy and freedoms “.

Also the president of the Community of Madrid, Isabel Diaz Ayuso, has shown its support for the protest by going to the Puerta del Sol before the start, although it has not participated in the demonstration due to its “institutional work”, so it has not coincided with Casado, at a time when the war is still open internal in the PP, with both leaders as main actors.

Ayuso has indicated that the reform of the law is a “direct attack” on the rule of law, on the freedom of all citizens and that “calls into question” the work of the Security Forces and Bodies that, in his opinion, “they are among the best in the world, the most professional, the most beloved, modern and who help precisely to combat the law of the strongest against the weak.” “A resentful minority cannot question the safety of all Spaniards. This is the law of the jungle of the strong against the weak,” he criticized.

See also  Publisher: Conferences? Hand Back Your Lanyard and...

For his part, the president of Vox, Santiago Abascal, has assured that his party supports “the most loyal and most dedicated servants of Spain” against a law “approved by the Government together with all the enemies of Spain and the constitutional order. “” That is the perfect summary of the situation that Spain now faces and why we are in the streets, “concluded the leader of Vox in a brief intervention before the media.

Also the leader of Ciudadanos, Inés Arrimadas, he has supported the protest with his presence and has indicated that his party is “more with the police than with the criminals.”

“It is good enough to protect criminals and unprotect or criminalize the Police or public servants,” claimed the president of Cs, who has accused the Government of “sectarianism.”

The Government commits to the repeal

Both the Government and the PSOE and United We can have launched messages in recent hours stating that the reform of the so-called ‘gag law’, approved by the absolute majority of the PP in 2015It will be carried out because it is a commitment of the members of the Executive, backed by other parties such as PNV, ERC or EH Bildu.

The Executive spokesperson, Isabel Rodríguez, has assured this Saturday that the Government will fulfill its commitment to repeal the law and has recalled that the State security forces and bodies “they will have legal security“with the reform, which will also guarantee that they have better means, resources, facilities and better wage guarantees.

For her part, the spokeswoman for Podemos, Isa Serra, has pointed out that the ‘gag law’ has done “a lot of damage” to Spain and its democracy. “Repeal it was a necessity and, in fact, I think it is late“, has considered the representative of the purple formation, who has added that thanks to the” push “of United-Podemos, an agreement with the PSOE has been achieved.

Government partners point out that the reform seeks to give greater guarantee and legal security both the protesters and the police, as the Minister of the Interior, Fernando Grande-Marlaska, maintains.

The unions, however, ugly the Executive that an “arbitrary” reform has been launched because the opinion of the police organizations has not been obtained.