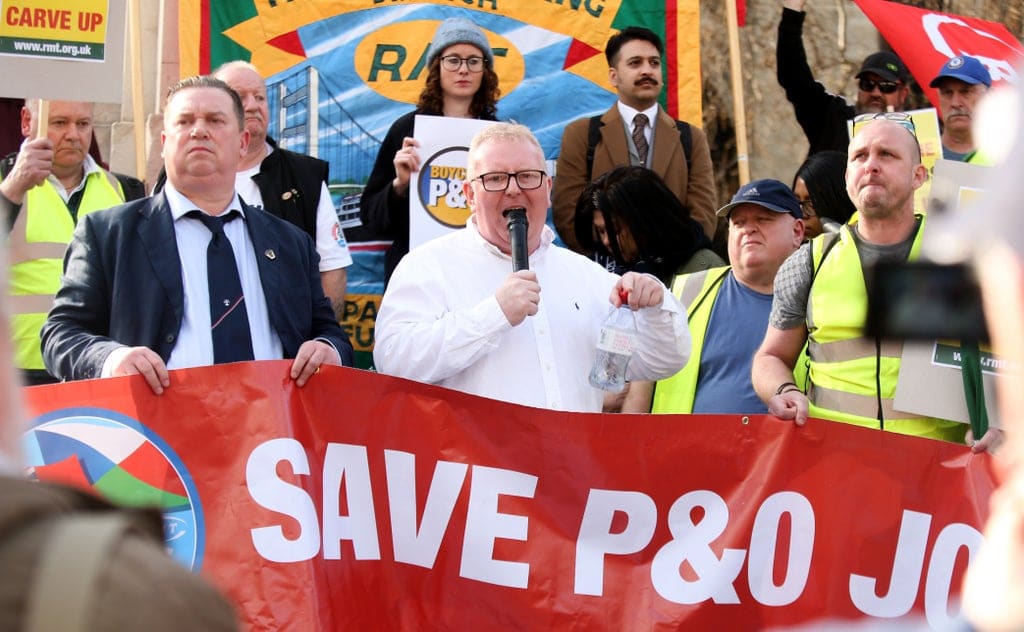 P&O Ferries’ chief executive has insisted his company did not commit any offense in firing nearly 800 workers without notice, as it set out a compensation package of £36.5m.

Peter Hebblethwaite said all vessels involved were registered outside the UK and the relevant authorities in each case had been properly notified.

The ferry boss also said the firm was “painfully aware” of the distress caused to workers and their families on being sacked without warning – but said the move was taken as a “last resort”.

In a letter to business secretary Kwasi Kwarteng dated March 22, Mr Hebblethwaite said notification had been made to the relevant authorities on 17 March, and that no offense had been committed regarding notifying the minister.

The government said it was “reviewing” the company’s explanations and was considering if legal action is required.

P&O Ferries has announced it is offering a total of just over £36m in compensation to sacked staff, with 40 employees in line for payments of more than £100,000.

It said payouts would be linked to the period of service, and in some cases exceed £170,000. No worker set to receive less than £15,000, the company said.

However, unions said the firm was trying to “buy its way out of a legal predicament” with the payouts – saying it was “fake” redundancy package.

A spokesman for P&O Ferries said: “This has been an incredibly tough decision for the business: to make this choice or face taking the company into administration. This would have meant the loss of 3,000 jobs and the end of P&O Ferries.”

The company said that, subject to the settlement agreement, it would pay 2.5 weeks uncapped salary for each year employed, rather than the statutory one or 1.5 weeks. It is also offering 13 weeks salary in lieu of notice, and 13 weeks salary on top of this in absence of consultation.

The ferry giant said that 575 of the 786 seafarers affected are in discussions to progress with the severity offers.

Mr Hebblethwaite said the “very clear statutory obligation in the particular circumstances that applied was for each company to notify the competent authority of the state where the vessel is registered”.

But Mick Lynch, general secretary of the Rail, Maritime and Transport union (RMT), said that “the pay in lieu of notice is not compensation. It is just a payment staff are contractually entitled to as there was no notice given”.

The union boss said: “The way that the package has been structured is pure blackmail and threats – that if staff do not sign up and give away their jobs and their legal right to take the company to an employment tribunal, they will receive a fraction of the amount put to them.”

Mr Lynch added: “The actions of P&O demonstrate the weakness of employment law and protections in the UK. P&O have flagrantly breached the law and abandoned any standards of workplace decency.”

Last week, Mr Kwarteng wrote to Mr Hebblethwaite to say P&O Ferries had “lost the trust of the public” and “given business a bad name”.

A BEIS spokesman said on Tuesday: “We have received a response to the business secretary’s letter to P&O and are reviewing their explanations.

“We will continue to work at speed with the Insolvency Service to consider if legal action is required and will provide an update as soon as possible.”

The Nautilus union said P&O Ferries’ “shameless actions now extend to trying to buy its way out of a legal predicament exposed by the unions, obligation to report to the secretary of state and to consult with the recognized trades unions”.

They said: “P&O Ferries are claiming to be offering the ‘largest compensation package in the British marine sector’ – a company in such desperate financial circumstances that it is prepared to spend £36.6m on a fake redundancy.”

The Nautilus union added: “Instead, it intends to bully our maritime professionals into signing settlement agreements to buy their silence.”

TUC general secretary Frances O’Grady insisted ministers “must come down on P&O like a ton of bricks”, adding: “If P&O is allowed to get away with a slap on the wrist, it will be a green light for employers up and down the land to treat staff like disposable labour.”

The chief executive has been invited to attend an evidence session jointly held by MPs on the Business, Energy and Industrial Strategy (BEIS) and Transport committees on Thursday on the shock mass sacking.

In a statement, the committee chairmen Darren Jones and Huw Merriman said: “We intend to hear from the key players about what they are going to do that means these workers are not left high and dry.”