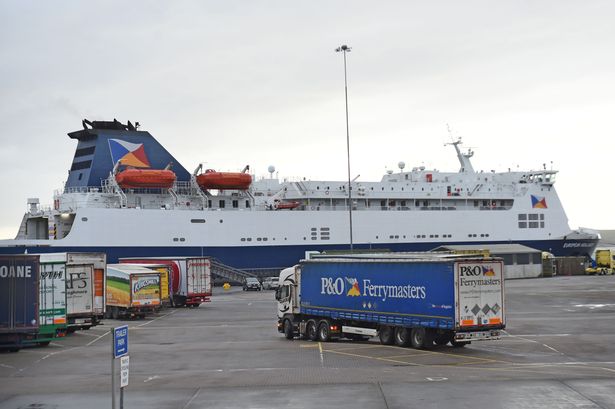 Ferry bosses have been accused of an “utter betrayal” after sacking staff on a route linking Dumfries and Galloway and Northern Ireland.

Workers on the P&O Cairnryan to Larne service were stunned to be told on Thursday they were being made redundant with immediate effect.

They were among 800 P&O staff across the UK being dismissed, with their jobs going to agency workers.

A joint statement from council leader Elaine Murray and deputy leader Rob Davidson said they will be doing “all that we can to help” those affected.

They added: “We are sickened at the actions of P&O Ferries. Our immediate thoughts are with the affected employees. This is devastating news for Dumfries and Galloway, and particularly our communities in the west.

“We would strongly urge P&O Ferries to reconsider its course of action. If the company continues down this route, then Dumfries and Galloway Council will reconsider P&O Ferries’ continuing participation in a potential partnership bid for a green freeport at Cairnryan.

“We are bringing an emergency motion on this to the full council to decide the way forward.”

The announcement – ​​made by a pre-recorded video message – sparked fury, with some crew refusing to leave their ships in protest. Further demonstrations are planned at Cairnryan tomorrow.

And South Scotland MSP Labor MSP Colin Smyth said: “This is devastating news for any affected workers and their families and an utter betrayal of the Wigtownshire community by P&O Ferries.

“Workers stood by the firm during the pandemic keeping sailings going yet now P&O are walking away from them.

“The underhand way the company have made the announcement via Zoom and by sending in private security to haul workers off ferries in some ports if need be and prevent staff going to work is simply beyond contempt.”

Sailings were halted on Thursday morning while the announcement was made. The Cairnryan service could be suspended for up to 10 days while a replacement crew is found, with passengers told to find an alternative operator.

A statement from P&O Ferries said: “We have made a £100 million loss year-on-year, which has been covered by our parent company, DP World. This is not sustainable.

“Our survival is dependent on making swift and significant changes now. Without these changes there is no future for P&O Ferries.”

But Mick Lynch, general secretary of the Rail, Maritime and Transport union, said: “We are seeking urgent legal action and are again calling for the Government to take action to stop what is fast turning into one of the most shameful acts in the history of British industrial relations.”

“The company provides a vital link between Scotland and Northern Ireland. It is also an important employer in south west Scotland, supporting many jobs in the local area. I have written to P&O asking for urgent clarity on what this means for the service and for jobs.”

South Scotland SNP MSP Emma Harper hit out: “This is a deeply cynical decision by P&O’s owners who have been allowed to use such immoral tactics because the UK Tory Government has blocked laws that would properly protect the rights of hard working staff. If Scots Secretary Alister Jack – allegedly Scotland’s man in the Tory Cabinet – had any clout, he would be doing much, much more than just sending a letter to P&0 seeking answers.”