Skip to content
Home News Plus-size model calls out Delta over seatbelt length: ‘Figure it out’ 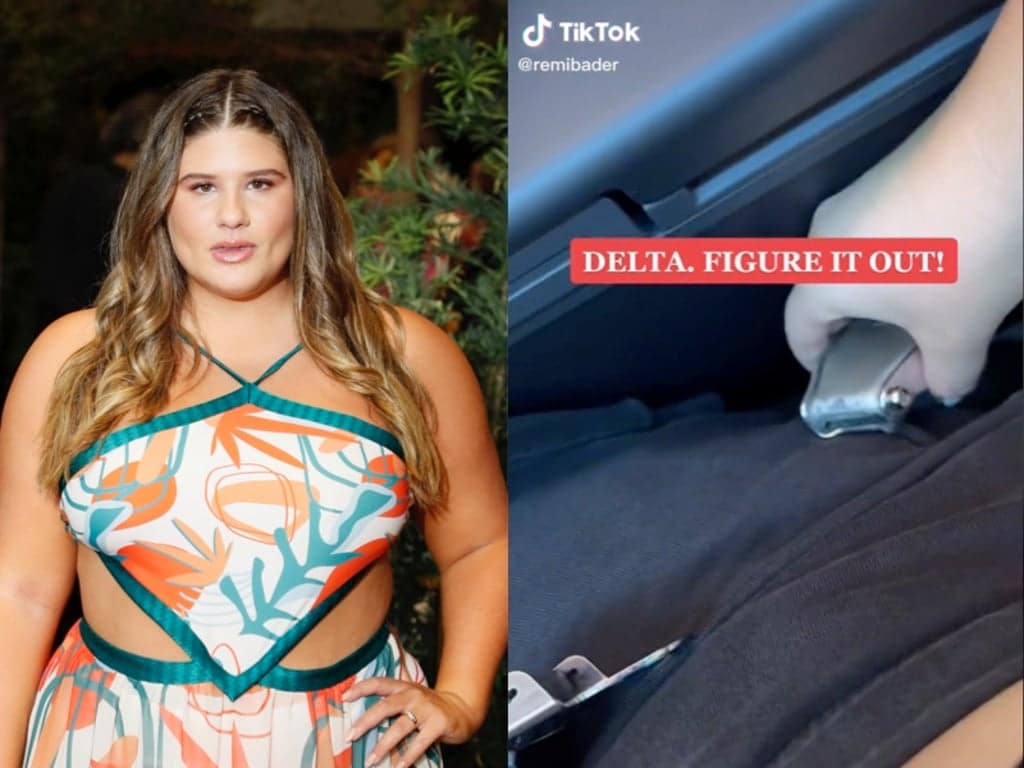 Influencer Remi Bader has called out Delta Airlines for its seatbelt sizes in a video showing her unable to buckle the safety harness.

Bader, a plus-size model and body positivity content creator, shared her concern with the airline in a video posted to TikTok this week.

In the clip, it shows Bader sitting in her seat of the plane and holding one side of the seatbelt, which she is unable to fasten to the other.

“Delta. Figure it out!” Bader wrote in the text caption on the clip, adding in the caption: “And no I shouldn’t need to ask for an extender. It should just be easy! @delta.”

As of Wednesday, the video has been viewed more than 957,000 times, with many of Bader’s viewers outraged on her behalf.

“Yes, why is asking for an extender even a thing just make the belts more accommodating,” one viewer wrote in all capital letters.

Another said: “What the hell, this is so wrong. Come on people,” while someone else wrote: “This is why I am always so nervous to fly.”

“This is such a traumatic experience. I was too embarrassed to ask for an extender when it happened to me,” someone else revealed.

The video also prompted viewers to share their own struggling experiences with airline seatbelt sizes, with one person recalling how they’d asked for an extend the last time they flew with the airline and were told by a flight attendant that they didn’t have any .

“I was asked to move from the exit row once because I needed an extender. Apparently an extender means you’re unable to open the exit door,” someone else wrote.

See also  Conservatives and Socialists, below 5%

According to travel reviewer The Points Guy, Delta’s seatbelts range in size from 40 to 45 inches, while other airlines such as American Airlines and JetBlue have longer seatbelts, ranging from 45 to 47 inches and 45 inches, respectively.

Airlines such as Southwest have shorter seatbelts, according to the travel expert, which notes that the airline’s seatbelts are 39 inches. Most of the airlines do offer an extender, however, which typically adds 25 inches to the seatbelt.

This is not the first time that Bader has called out Delta for its seatbelt length, as she previously created a TikTok about the airline in October 2021, where she discussed a similar negative experience.

According to Bader, who acknowledged that she prefers the airline, Delta’s new plans have “way shorter seatbelts than they did before,” with the TikToker revealing that she couldn’t buckle the seatbelt around her body and was “freaking out” during takeoff.

In the video, Bader then recalled how she’d asked a flight attendant about the issue, at which point she was informed that she could ask for an extender. While Bader said she did not know that it was a possibility, she said that she later received numerous messages from her followers about the embarrassment they feel when they have to ask for the extension after she recounted her experience from her on Instagram.

Bader revealed that she also felt self-conscious at the moment, with the influencer recalling how she’d started to feel “embarrassed” and like there is “clearly something wrong with me”.

The TikToker concluded the video acknowledging that “there’s some things in life that are just so simple,” and that she thinks making sure seatbelts accommodate all airline passengers is one of them.

“Just make longer seatbelts. Why is this an issue?” she asked, adding that she thinks the problem “needs to change immediately”.

According to the Delta Professional website, which notes that the airline offers the option of purchasing an extra seat for “personal comfort” during a flight, Delta “does not require a passenger who needs a seatbelt extender or is unable to lower the armrest to purchase an additional seat”. However, the website does add that, in cases where “a passenger impedes on another passenger,” they may be “asked to move to another location that provides additional space, or in the event of a full flight, be asked to take a later flight with available seating”.

The Independent has contacted Bader and Delta for comment.