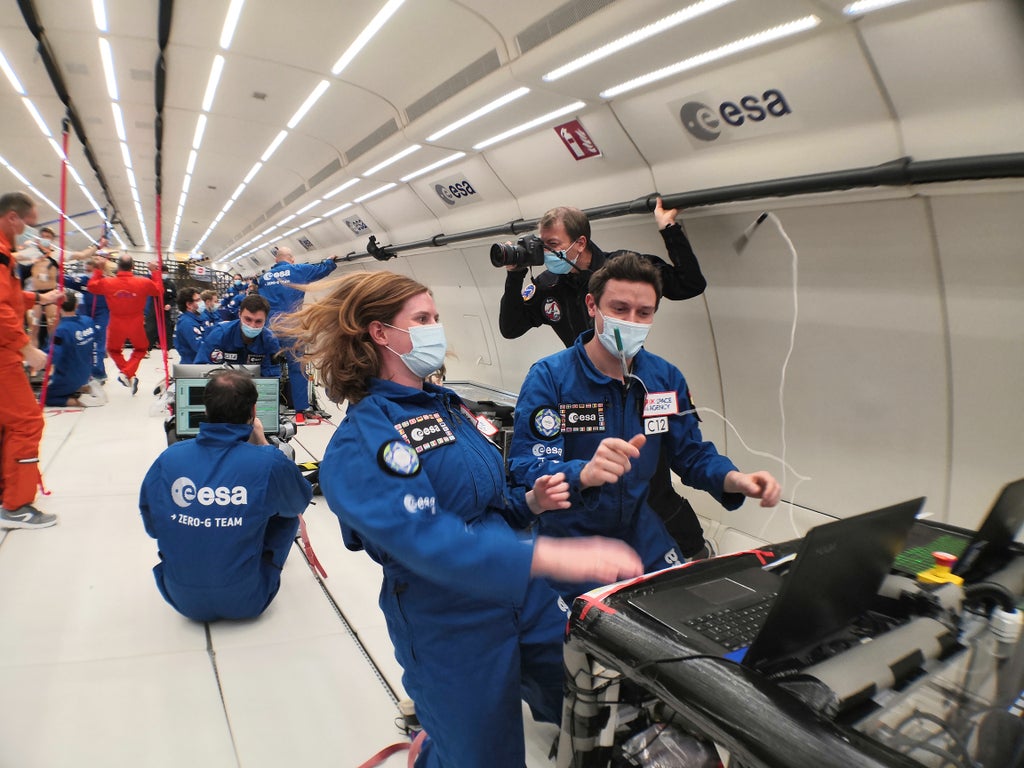 As Nasa and ESA look forward to astronauts returning to the Moon later this decade as part of Nasa’s Artemis program, scientists are researching ways to allow humans to survive on the lunar surface for weeks or more at a time without constant resupply for Earth.

Learning to use water ice trapped in deeply shadowed craters, or how to extract oxygen from regolith, the lunar soil, known as “in situ resource utilization,” could be key to such long-term operations. But scientists are still learning how much environmental conditions on the Moon — and later, Mars — could make using the resources there more difficult than expected on Earth.

One of the promising technologies for creating everything from breathable oxygen to construction materials on the moon is the electrochemical process of electrolysis — using electric charges to separate oxygen from melted lunar soil. But a new study published Tuesday in the journal Nature Communicationsfor instance, found that electrolysis systems in low gravity environments like those of the Moon and Mars could be less efficient than on Earth.

“If you don’t account for this, if you operate the same system, on the moon, that you tested on Earth, you’re going to produce a lot less product, which is quite critical if you’re planning out what you need to function for a certain period of time,” said Dr Beth Lomax, a research fellow at ESA and lead author of the study.

Dr Lomax and her colleagues began their study because little work had been done on molten material electrolysis in low gravity conditions. But because the typical method for studying the effects of low gravity conditions on Earth — boarding an airplane and letting the pilot fly it through a series of steep parabolic climbs and dives — would be hazardous with molten materials, Dr Lomax and her colleagues used a small water electrolysis cell to stand in for a higher temperature electrolysis cell. They placed their electrolytic cell in a centrifuge and how well the electrolysis process worked at varying gravity levels during the parabolic flights but also conducted similar experiments on the ground in a centrifuge.

Two major findings resulted from the study. First, they found that at the lower gravity conditions similar to the Moon, the gas bubbles formed by applying an electric charge to the water — the product lunar astronauts would want to collect — would coagulate around the electrodes due to the lower gravity, increasing electrical resistance and reducing the efficiency of the process by 11 per cent.

Second, they learned that by conducting the experiment in the air and on the ground, they can now reliably model low gravity electrolysis in ground-based centrifuges going forward without the need for taking to the air, and can also run longer experiments.

“You could put an entire payload destined for the Moon in one of the large-diameter centrifuges with the big gondolas and spin it for a month if you wanted to,” Dr Lomax said. “Whereas with parabolic flights and drop towers and other zero gravity platforms, you’re extremely limited by duration,” with microgravity conditions lasting maybe 18 seconds at a time.

Electrolysis is not entirely new in the space technology realm, according to Jerry Sanders, Nasa’s capability lead for in situ resource utilization. Water electrolyzers have been used on the International Space Station and Nasa researchers and engineers have a good handle on how those systems operate in lower gravity environments.

“Where we don’t have a good handle is the molten Regolith,” Mr Sanders said. “So I think it’s a timely paper in terms of, these were things that we were already considering. I think it will have to make us think a lot more about the anode and cathode materials and how they’re fabricated, because that will promote or degrade bubble growth quite a bit.”

It’s not necessary to engineer reliable lunar regolith electrolysis systems to simply go to the Moon, Mr Sanders notes, as the Apollo program utilized no such technology. But he likes to make an analogy to camping versus settling in an area: No one minds packing all their food and water for a three day camping trip, but packing everything for many weeks or months in a remote location is another matter.

And because of the immense amount of energy required to fly anything into space, packing for the Moon, or Mars, is a lot more complicated than packing for a getaway in the mountains.

“For every kilogram I land on the Moon or Mars, I have to launch 10 kilograms into orbit, or more,” Mr Sanders said. “When you think of, for example, Mars, it takes something like 20 to 30 metric tonnes of propellant to get the crew off the surface and back up into orbit.”

So Nasa has also been studying means of creating propellant from resources on Mars, such as separating oxygen from the abundance of carbon dioxide in the Martian atmosphere. An electrolysis device known as MOXIE, or the Mars Oxygen In-Situ Resource Utilization Experiment, is currently operating on Nasa’s Perseverance rover on the Red Planet.

Molten regolith technologies, which could help produce construction materials or space parts on Mars, or oxygen and similar materials on the Moon, however, are still in the relatively early development phase at the US space agency. Nasa’s Artemis program currently aims to land the first humans on the Moon since the 1970s sometime in 2025 with the Artemis III mission. Future missions in the program could see astronauts spending weeks on the Moon in the lunar southern polar region, which is where lunar regolith electrolysis technologies could play a role.

“We do plan on trying to move this technology forward quickly, as well as others, to stay in line with the Artemis program,” Mr. Sanders said. “We are trying to head towards some kind of a demonstration, in the [2025 to 2027] timeframe.”

Alopecia areata: Student who lost his hair from GCSE stress reveals the hair loss treatment that brought his confidence back

Tom Parker opens up about drug struggles in posthumous autobiography