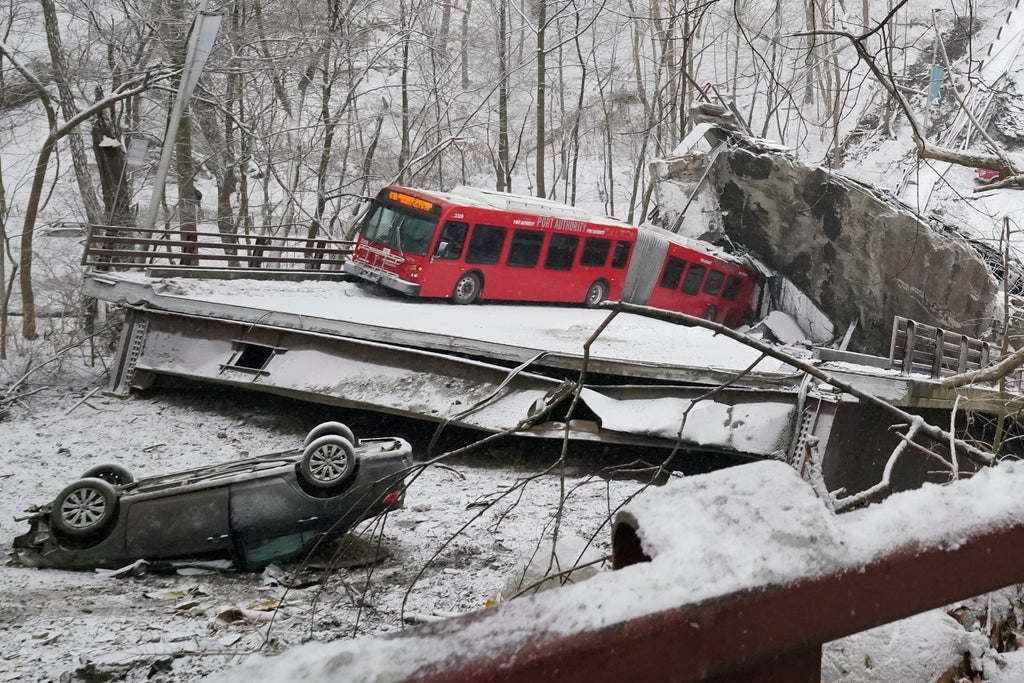 A bus and several cars plummeted into a ravine as the Fern Hollow Bridge over Frick Park in Pittsburgh collapsed at around 6am on Friday.

Pictures from the area show the cracked, snow-covered bridge lying in a gorge, with emergency services on the scene.

Despite several vehicles being thrown from the bridge as it collapsed, emergency services reported there had been no fatalities, while paramedics reported 10 people had suffered injuries, including one firefighter who was being treated at the scene, Trib live reported.

Rescuers rappelled down 150ft to reach the site and a human chain was formed to help people to safety from a city bus that was crossing the bridge at the time.

Following the collapse, a smell of natural gas had been reported in the area. “When it collapsed it cut the line,” Peoples Gas spokesman Barry Kukovich told the Trib. “We are turning off the gas in the immediate area.”

The collapse of the bridge comes hours before President Joe Biden is set to visit Pittsburgh, known as the City of Bridges, to discuss plans to improve the country’s infrastructure.

Transportation Secretary Pete Buttigieg is monitoring the situation and is also set to speak about infrastructure at an event in Kansas later today.

Hospital: Injured are in ‘fair condition’

The University of Pittsburgh Medical Center says that four adult patients required treatment following the bridge collapse, but all are in “fair condition”.

President Joe Biden will proceed with his planned visit to Pittsburgh, despite a bridge collapse that injured at least 10 people.

The president was set to visit Pittsburgh and speak at Carnegie Mellon University to discuss the nation’s supply chains and tout his bipartisan infrastructure law.

Mayor Ed Gainey tweeted: “I just got off the phone with President Biden. Thank you @POTUS for your support as we address the Fern Hollow Bridge collapse. I look forward to seeing you soon.”

Firefighters formed human chain to pull people up from site

First responders formed a human chain to rescue people after a bridge collapsed in Pittsburgh.

The two-lane bridged collapsed before 7am on Friday, with emergency personnel rappelling down almost 150 feet (46 meters), while other first responders formed a “daisy chain” – holding on to each other as they pulled people up.

“Firefighters that were here initially on the scene… did like a daisy chain with hands just grabbing people and pulling them up. So it was a physical rescue,” Pittsburgh Fire Chief Darryl Jones told reporters.

Pennsylvania Lieutenant Governor John Fetterman spoke with CNN while at the scene of the bridge collapse, saying he was “speechless” looking out over the aftermath of the incident which he described as “surreal”.

He added: “Thankfully the schools were on a two-hour delay for weather so the traffic was less than it would have been normally.”

Mr Fetterman, a Democrat, is also running for the Senate and tweeted out a campaign video from a previous run for that office in 2016 in which he noted there were “broken bridges around every corner”.

I added: “That’s why President Biden passing BIF in 2021 was so important. I don’t know how anyone can look at today’s disaster and think we can afford to wait on investing more in infrastructure.”

Aerial view of the disaster

Buttigieg in Kansas on Friday to launch infra grant program

The US Transportation Department said on Friday it was opening a $1.5bn grant program for a wide range of infrastructure projects.

In November, the department awarded 90 projects in 47 states a total of $1bn.

Transportation Secretary Pete Buttigieg said the funds will “support more projects than ever, and help make our transportation system safer, more accessible, and more sustainable for people across the country.”

Under the $1 trillion infrastructure bill signed into law by President Joe Biden, the Transportation Department will receive $660bn over five years, including $210.5bn to be awarded in competitive grants. Of that $71bn is for new grant programs.

Mr Biden has made rebuilding US infrastructure a key part of his domestic agenda.

Mr Buttigieg will be in Kansas on Friday to discuss the new grant program.

Environmental groups like the Sierra Club say the US must do more than just rebuild existing roads and bridges but must also reduce the number of single-passenger vehicles and dramatically improve public transit.

The grants awarded under the Rebuilding American Infrastructure with Sustainability and Equity (RAISE) last year went to rebuild roads and add rail lines — and to create new green space, trails, bike lanes and safer streets for pedestrians as well as dedicated bus lanes and dock replacements.

Applications for the new grants are due by April, with awards to be announced by August.

‘A lot of work ahead’ to restore major transport artery

Allegheny County Executive Rich Fitzgerald notes that while the city is fortunately no lives were lost, there is a lot of work ahead to restore a major artery in the city’s transportation network.

Mike Doyle, US member of Congress representing Pennsylvania’s 18th District, tweets: “The Forbes Avenue bridge collapse is a major challenge for our community. It will disrupt transportation in PGH for months at least. I’ve been in touch with the White House, @gainey_ed and @ACE_Fitzgerald to ask for help and facilitate coordination on rebuilding it.”

He adds: “This is a tragic example of why the #infrastructure bill Congress just enacted is needed. We should be constantly investing MORE in our infrastructure so our bridges and other public works don’t reach this point of disrepair.”

He tweeted: “Closely monitoring the situation at Frick Park Bridge in Pittsburgh, and grateful for the first responders on scene. Our Department is in touch with @PennDOTNews and local authorities to offer our support. @USDOT stands ready to assist.”