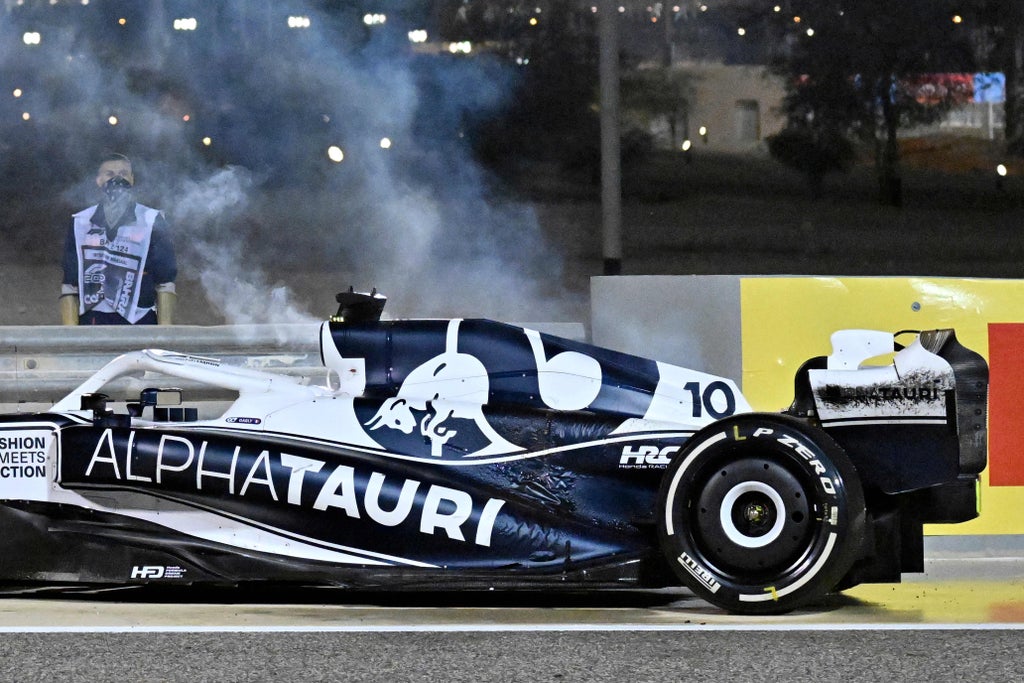 AlphaTauri’s Pierre Gasly is likely to have to take a grid penalty early in the 2022 Formula 1 season after his car caught fire at the season-opening Bahrain Grand Prix on Sunday.

The Frenchman was forced to pull over to the side of the road with less than ten laps of the race to go at Sakhir, with his engine losing power the blaze began at the rear of the car, melting much of the bodywork and damaging various internal components.

Gasly had been set to score strong points for the Italian team after progressing up the field from his starting position of tenth, but ultimately because the first driver to retire in the 2022 campaign.

He was followed shortly afterwards by Max Verstappen and Sergio Perez, who also run Red Bull Powertrains engines in their Red Bull cars, after the team took over manufacturing from Honda following the Japanese company’s withdrawal from the sport at the end of 2021.

“I literally had zero warning, which is very strange,” Gasly told Motorsport.com about the engine failure. “I’m not too sure what happened yet, just out of Turn 1 the whole car switched off, and I parked it. Then basically a barbecue at the back of the car.

“We were super confident after testing, we didn’t have a single issue, and just shows this sport keeps you grounded all the time, you can never be overconfident about anything. I just hope the engine is not gone, but we’ll deal with it.

“So not the finish we would have liked, and especially after the race was going so well with a great start, great battle with Fernando [Alonso]which was pretty fun, and then after also with Kevin [Magnussen]. We were in P8 quite comfortably, so just a big shame to miss out on these points.”

See also  Asma Khan: 'As an immigrant, I want everyone to know you cannot eat my food if you don't also take me'

Formula 1 teams are allocated a certain number of engine components for each season, and are given grid penalties if they exceed the allotted amount. Teams are allowed to run just two energy stores, which house electrical power, across the whole season, for example. If a driver needs a third, he will incur a five-place grid penalty. Losing any engine component so early on would almost certainly cause AlphaTauri to suffer an engine penalty at some point in the campaign.

The team’s technical director Jody Egginton said he and his colleagues are investigating the cause of the fire and assessing the damage.

“The source of the fire could be things that were very hot not being cooled properly. We’ve had to look at it, there’s a lot of superficial damage. We’re still assessing, but as a minimum the rear suspension will be new, a lot of the wiring will be new, the bodywork was singed.

“We’ll assess the battery, we’ll assess the ICE, because there’s a lot of fire extinguishant gone over the car. Worst case, it’s a power unit element and a chassis, but at the moment, it’s too early to say.

“Anything that’s connected to the power unit or the gearbox would have got hot, the fire was around the area, And again, everything’s had fire extinguishant all over it. So we could potentially change all these bits and send them back to the factory for full inspection.”

If multiple engine components have been damaged and are written off, the team could opt to take all of their penalties tactically in one hit and start a race from the back of the grid in 20th position.

The second race of the 2022 Formula 1 season takes place this Sunday at the Jeddah Corniche Circuit in Saudi Arabia.