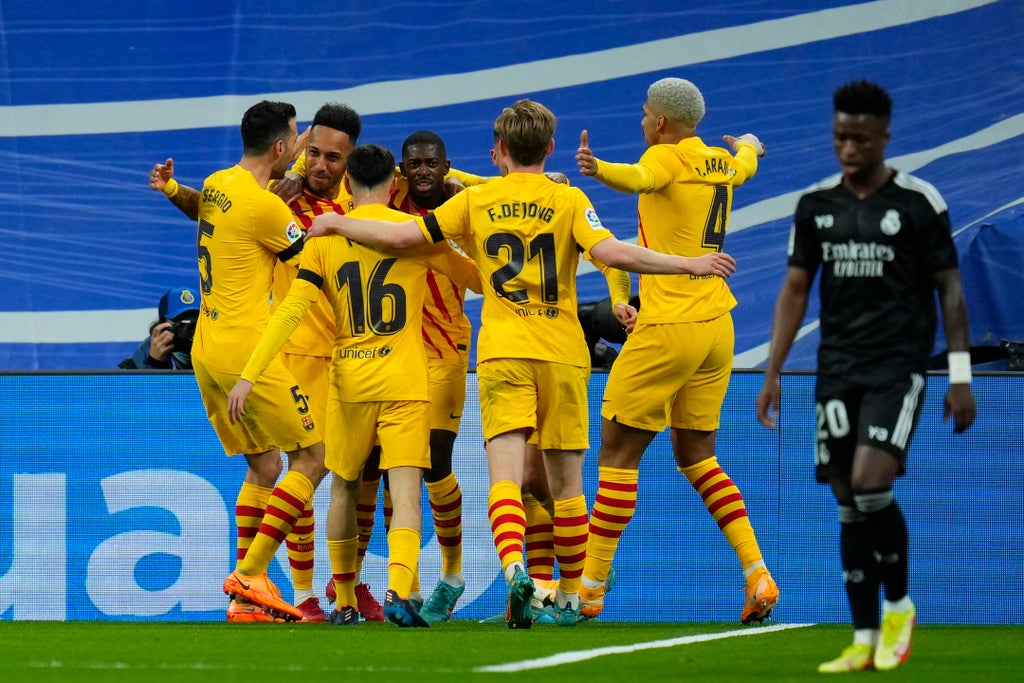 Sunday proved a bad day to be top of the table in Spain and France as Barcelona hammered rivals Real Madrid 4-0 and Paris St Germain lost 3-0 at Monaco.

Xavi’s overhaul of Barca took another huge step as they humbled the LaLiga leaders at the Bernabeu thanks largely to January signings Pierre-Emerick Aubameyang and Ferran Torres.

Aubameyang broke the deadlock when he headed in Ousmane Dembele’s cross with 29 minutes gone before Ronald Araujo turned in from a corner to double the lead.

Two minutes into the second half, Barca hit Madrid on the break, with the moved capped when Aubameyang’s flick was met by a first-time shot from Torres.

Torres then returned the favor four minutes later as Aubameyang dinked a shot over Thibaut Courtois, with VAR awarding the goal after the offside flag had gone up.

Sevilla could not take full advantage of Madrid’s defeat as they were held to a goalless draw by Real Sociedad – a third straight draw for the second-placed side and seventh in their last nine.

Real Betis are four points behind Barca in fifth after they too were held goalless, away to Cadiz.

Ruben Sobrino struck in the 90th minute to give Cadiz a 1-0 win over Villarreal, while Raul de Thomas scored late in the first half as Espanyol edged out Real Mallorca by the same scoreline.

In France pressure grew on PSG boss Mauricio Pochettino, who branded his side’s 3-0 defeat away to Monaco “a sporting shame”.

PSG remain runaway leaders, 12 points clear, but have now lost four of their last six in all competitions, a run which saw them dumped out of the Champions League.

Sunday’s setback was their biggest defeat of the season as Wissam Ben Yedder scored twice, the second a late penalty, while teeing up Kevin Volland for his side’s second.

“It’s unacceptable to start the match like that,” Pochettino said at the post-match press conference. “There is sporting shame. It can’t be repeated. We can still lose matches, but what happened shouldn’t.”

Second-placed Marseille beat Nice 2-1 but were grateful that Cedric Bakambu struck in the 89th minute to add to Arkadiusz Milik’s penalty in first-half stoppage time as Mario Lemina would pull a goal back in a frantic finish.

Rennes remain third after they responded to their Europa Conference League exit with a 6-1 route from Metz, with Martin Terrier getting the first two before Serhou Guirassy added a hat-trick.

Montpellier won 2-0 away to Bordeaux despite playing the second half with nine men, getting goals from Sepe Elye Wahi and Florent Mollet before Nicolas Cozza and Mihalio Ristic both saw red in an ill-tempered end to the first half, with Alberth Elis missing the penalty Cozzo conceded.

Fifth-placed Strasbourg were held goalless away to Lorient, while the match between Reims and Lyon also finished 0-0.

Sofiane Boufal’s penalty helped Angers move clear of the bottom three with a 1-0 win over Brest.

Tammy Abraham scored twice as Roma cruised to a 3-0 win over city rivals Lazio to move above them and into fifth place.

Abraham needed less than a minute to open the scoring and then doubled the advantage, scoring his 23rd of the season in the 22nd minute before Lorenzo Pellegrini scored the pick of the goals with a curling free-kick.

Francesco Caputo’s brace gave Sampdoria a 2-0 win over Venezia, who had Thomas Henry sat off late on, while Matteo Cancellieri canceled out Federico Di Francesco’s goal as Empoli and Hellas Verona drew 1-1.

Borussia Dortmund lost more ground on Bayern Munich as they were held to a 1-1 draw at Cologne.

Dortmund’s advantage over third-placed Bayer Leverkusen was cut to eight points after Paulinho’s late brace gave them a 2-0 win at Wolfsburg.

See also  Adele and Rich Paul: A timeline of their relationship