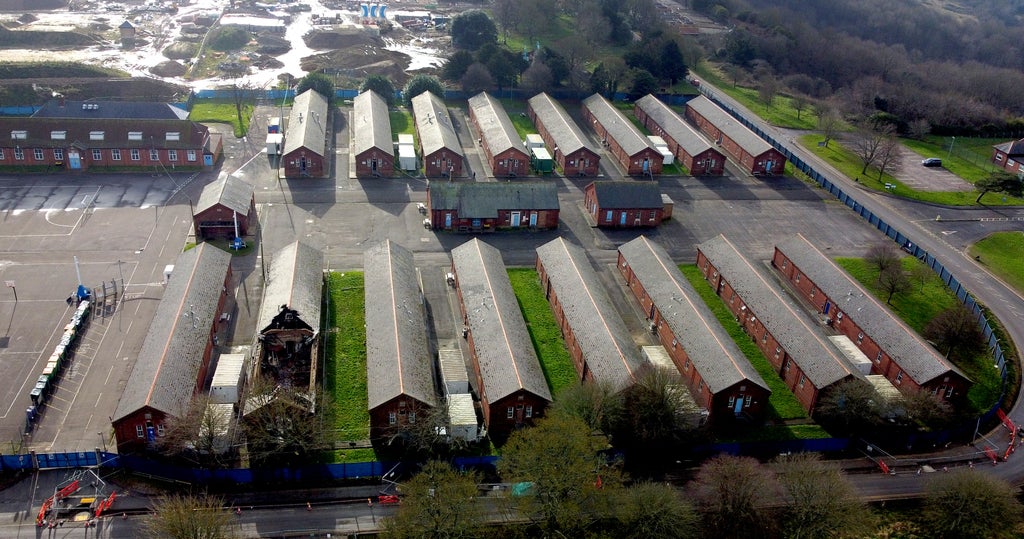 The Home Office’s decision to provide picnic tables and limited sporting facilities at Napier Barracks in a bid to improve conditions for migrants living there has “not scratched the surface”, MPs and charities have warned.

Eight months after the High Court found that the Ministry of Defense site, which was repurposed by the Home Office for use as asylum seeker accommodation in September 2020, failed to meet the “minimum standard”, ministers are being warned that the same issues remain.

During a meeting hosted by the All-Party Parliamentary Group on immigration detention on Tuesday, MPs said that they had encountered “outrageous” conditions during a visit to the site last week, while charities warned that it remained “damaging” for the 300 residents living there.

In June last year, the High Court ruled that the accommodation failed to meet a “minimum standard” and that the Home Office acted unlawfully when deciding that the former military camp was appropriate. The judge cited the spread of Covid-19, overcrowding, a lack of ventilation and the “detention-like” setting for the men, who were not meant to be detained.

Three months later, home secretary Priti Patel said conditions at the site – which currently holds 304 people – had been “significantly improved”, citing more direct engagement by the Home Office with contractors and residents, a limit of 90 days that people can be held there and the introduction of “outdoor seating and tables”.

However, speaking to the APPG, Naomi Blackwell, detention outreach manager at the Jesuit refugee Services (JRS), who visits the site once a week, said: “There is an impression that following the court judgment in 2021 it has improved and is not longer damaging to men being held there. I want to dispel that myth.

“The place continues to be damaging, just as we know the impact of detention can be damaging.

She added: “Napier is an army camp, it will always look like an army camp. It doesn’t matter how many picnic tables you scatter around the place. It will always have that impression [..] It’s a really controlled environment.”

Ms Blackwell told the APPG that although JRS is permitted to enter the site once a week, the charity is “controlled” while there, with a security officer “at their shoulder” throughout and that this impacted on people being able to speak to the charity about previous traumatic events.

She told of one recent incident whereby the charity attempted to distribute 300 coats to the men onsite and we were denied access by the Home Office the day before despite having been granted access three days earlier. The Home Office has been approached for comment.

The Home Office recently extended its use of Napier until 2025. The department is also said to be planning to repurpose other MoD site for use as asylum accommodation in the coming months.

SNP MP Stuart McDonald, who visited Napier Barracks with a number of other MPs from the APPG last week, said the sleeping arrangements at the site – which health officials previously deemed to be “not suitable” for use – were “outrageous” and had not been improved.

“You’ve got eight, 10, 12 folk in one bedroom, separated by flimsy sheets that aren’t even totally opaque. They had no autonomy, they can’t decide what they’re doing each day, no privacy, there’s no sense of home or community. All you can do is exist, survive, wait, and that’s horrible,” he said.

See also  The right in Latin America needs a future, not a past | Opinion

“The Home Office tries to talk up what little there is to distract people and give them something to do: a concrete football park, a concrete basketball court […] It’s nothing that can remotely scratch the surface of giving anything fulfilling to 300 people.”

The Home Office has said that the site isn’t suitable for vulnerable people, but the APPG heard that the system for assessing vulnerability before they are moved to the barracks was “inadequate”.

Maddie Harris, of Humans for Rights Network, which runs a drop-in for residents of the camp, said: “We regularly meet men in Napier who have medical problems. Mental health is very poor and is being really negatively affected by being at Napier.

“Any suggestion the Home Office has improved or reworked the process by which it identifies somebody to move into Napier is simply incorrect and not what we are seeing.”

The Home Office and Clearsprings have been approached for comment.