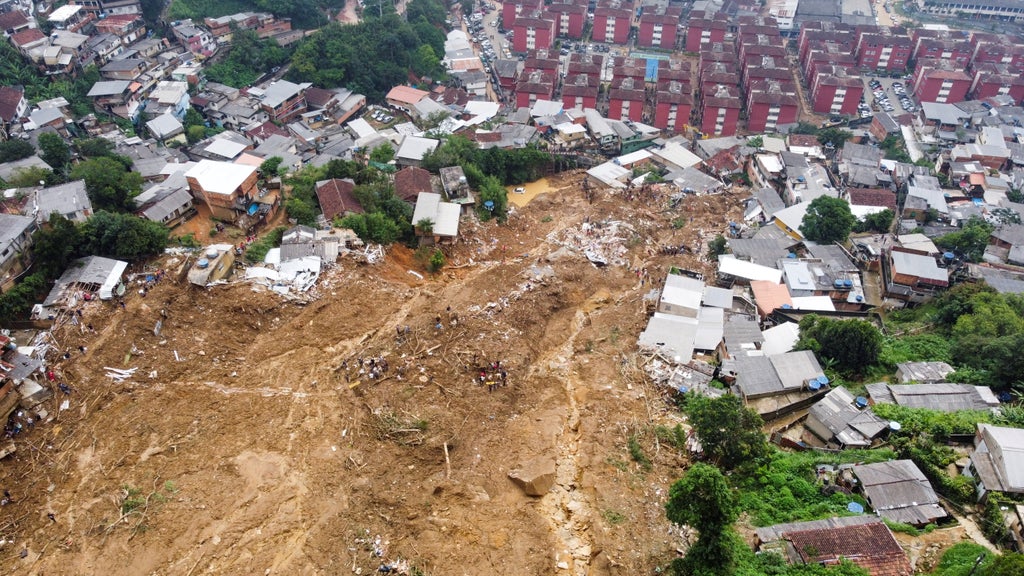 Photos and videos have emerged of devastating mudslides in the Brazilian state of Rio de Janeiro as the death toll climbed to at least 58 people.

Floods swept through the mountainous city of Petropolis following heavy downpours on Tuesday.

Teams of rescuers continue to comb through the wreckage and clogged streets, looking for survivors. More than 180 soldiers were working in the stricken region which saw 900 deaths from heavy rainfall in 2011.

More than 10 inches of rain (25.8cm) fell within three hours on Tuesday – almost as much as during the previous 30 days combined.

Footage and pictures showed cars and houses being dragged away by landslides and water swirling through Petropolis and neighboring districts.

“The neighbors came down running and I gave them shelter,” bar owner Emerson Torre, 39, told the Associated Press.

But under torrents of water, the roof collapsed. He managed to get his mother from him and three other people out of the bar in time, but one neighbor and the person’s daughter were unable to escape.

“It was like an avalanche, it fell all at once. I’ve never seen anything like it,” Mr Torre said, as rescue helicopters hovered overhead. “Every neighbor has lost a loved one, has lost two, three, four members of the same family, children.”

Rosilene Virgilio, 49, recalled the pleas for help from a woman she couldn’t save during an interview with the AP.

“Yesterday there was a woman screaming ‘Help! Get me out of here!’ But we couldn’t do anything, the water was gushing out, the mud was gushing out,” she said. “Our city unfortunately is finished.”

Governor Claudio Castro said on Twitter that he was mustering all heavy machinery belonging to several states to help dig out the buried area.

Brazilian President Jair Bolsonaro is currently on a trip to Russia to visit President Vladimir Putin amid Russian troops gathering on the Ukrainian border.

“May God comfort the family members of the victims,” Mr Bolsonaro tweeted. He added that he had instructed his ministers to deliver immediate support to the afflicted.

Southeastern Brazil has been punished with heavy rains since the start of the year, with more than 40 deaths recorded between incidents in Minas Gerais state in early January and Sao Paulo state later the same month.

The southeastern states of São Paulo, Rio de Janeiro and Belo Horizonte have seen a rise in extreme rainfall events over the last 30 years which are linked to the climate crisis.

The mountainous areas are vulnerable to the rise in precipitation which can destabilize steep inclines and cause landslides.

Two people were killed, according to Reuters, after the tremor led buildings to partially collapse, power cuts and left roads impassable.

The quake struck close to the town of Tiquisate, around 80 miles from the country’s capital Guatemala City, at around 1.30am with tremors felt as far away as Mexico.

AP reporting contributed to this story