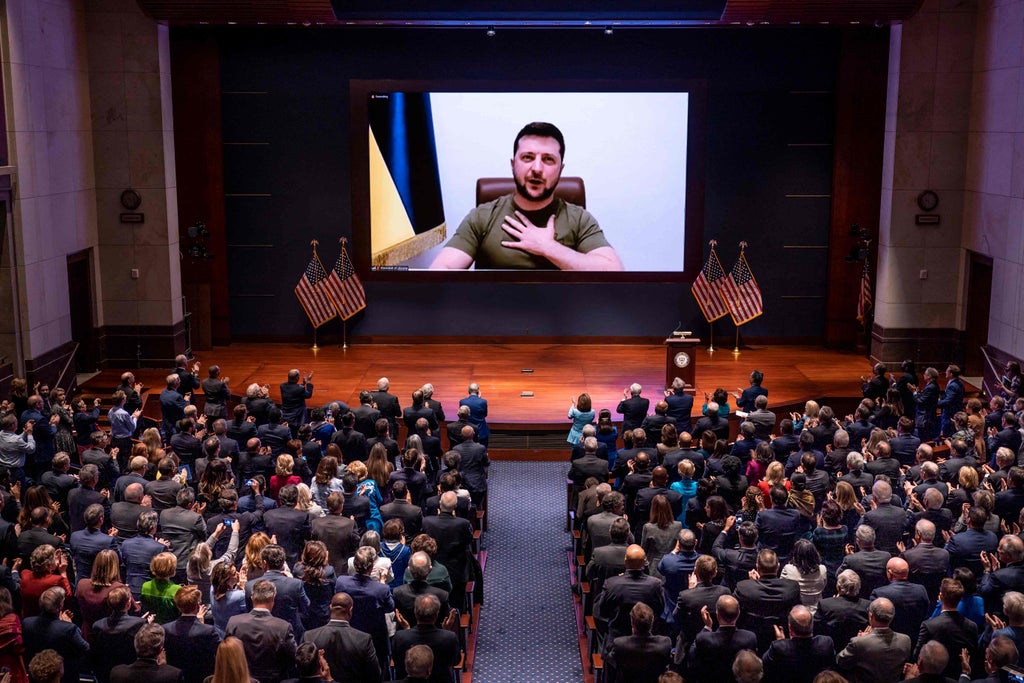 Republican financier Peter Schiff has doubled down on his criticism of the outfit worn by Ukraine president Volodymyr Zelensky while addressing the US Congress.

Mr Schiff, a former GOP congressional candidate in Connecticut and the chief economist at Wall Street giant Euro Pacific Capital, had faced massive backlash for questioning why Mr Zelensky was not wearing a suit while addressing the US lawmakers last week.

“I understand times are hard, but doesn’t the President of the Ukraine own a suit?” he wrote on Twitter.

“I don’t have much respect for current members of the US Congress either, but I still wouldn’t address them wearing a t-shirt. I wouldn’t want to disrespect the institution or the Unites States (sic).”

Mr Schiff received instant backlash after the tweet, as commentators accused him of overlooking the speech itself to focus on an irrelevant detail.

Critics also said that as Mr Zelensky’s country was battling an invasion, he had more important things to focus on instead of his attire.

In an edition of his podcast The Peter Schiff Showpublished over the weekend, however, Mr Schiff defended his comments.

“I’m probably one of the most hated men on the planet right now. In fact I may be number two just after Vladimir Putin himself,” he said.

Mr Schiff said he had merely remarked on Mr Zelensky’s choice of wearing a T-shirt because the Ukrainian president was addressing a historic joint session of Congress.

“I understand that he has been wearing that T-shirt a lot since the invasion, and that’s kind of like how he has been dressing which is fine. But I just thought for this occasion, for the half hour or so that he was speaking before a joint session of Congress that maybe he could put on something a little nicer.”

Mr Zelensky’s green T-shirt has become synonymous with his appearances in public since the Russian invasion of Ukraine on 24 February.

“Yes, it’s a war. Times are tough. But I didn’t think it was such a dire life or death situation, at the moment, that he couldn’t have worn something nicer than a T-shirt,” Mr Schiff continued.

He added that he did not think his tweet would evoke such a strong backlash.

“I’m just tweeting so I don’t think that’s a big deal, right! It’s like, I’m just watching it and expressing a thought I had in real time,” he said.

“I’m sure that other people, though they won’t admit it, might of been thinking the same thing. They may have expected him to put on something a little nicer than that T-shirt,” he added.

“Sure with the benefit of hindsight and a little reflection it really didn’t matter. So I didn’t have to send out that tweet.”

He also said that, he had known about the “huge firestorm” that came because of the tweet, he would not have posted it.

“So obviously, I do regret the tweet, but I haven’t taken it down.”