The ERC candidate, Pere Aragonès, has been invested president of the Generalitat with the 33 votes from ERC, 32 from JxCat and 9 from CUP.

At 09:00 hours The session has been resumed, with the intervention of Vox, followed by CUP, Together We Can, Citizens and the PPC.

The leader of Vox In the Parliament, Ignacio Garriga, has claimed that his formation will be the “main opposition” to the future Government of the Generalitat and has warned that they will defend “until the last consequences” “national unity”.

The representative of the CUP in Parliament, Dolors Sabater, has warned that his votes to invest Aragonès will not be “a blank check” and has urged ERC to fulfill its commitments or, otherwise, its formation “will not be able to sustain the parliamentary majority “.

The spokesperson for the common in Parliament, Jéssica Albiach, has predicted that the new Govern of ERC and Junts will not mean a change of stage for Catalonia, and has added that it was born with “planned obsolescence”.

Aragonès: “Our limit will be the popular will of the citizens of Catalonia”

The leader of Cs in Catalonia, Carlos Carrizosa, has argued that Aragonès “now has the opportunity to reset the counter and govern for all” Catalans, although he says he doubts it.

The spokesperson for the PP in the Parliament, Alejandro Fernández, has replied to the Aragonés that he must respect the law if he wants a referendum like the one in Scotland: “The Scots have respected the law, that is the immense difference. Those who have to learn in any case from the Scots you are”.

See also  Michael Page vs. Logan Storley: 'Lots of people put on a mask after losing – that will burn away at you'

The new President of the Generalitat, Pere AragonèsIn his turns to reply to the different groups, he has said that the imprisoned politicians are not criminals: “They are servants of the country and we will work to live up to their commitment.”

In addition, he recalled that the Parliament has only been closed twice: during the Franco dictatorship “and by 155”. “Every time it closes, we will reopen it,” said the candidate for the Generalitat.

Aragonès has insisted that the popular will cannot be limited by laws: “They must be able to change.”

Aragonès has defended that “now what has to be done is to resolve the political conflict, with dialogue and negotiation, as in advanced countries”, and has given an example of the referendum in Scotland. 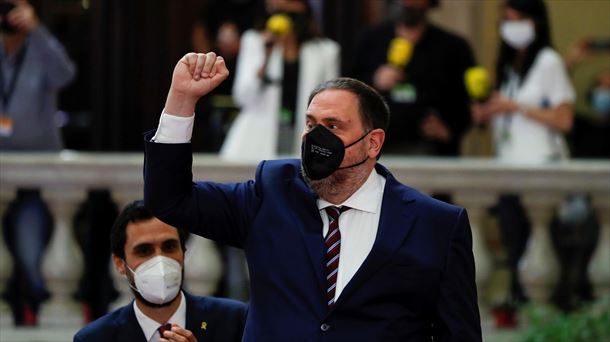 The former presidents of the Generalitat Quim Torra and Artur Mas, and the former vice president of the Government and leader of ERC, Oriol Junqueras, have witnessed the full investiture.

Torra arrived before the plenary session began and Mas and Junqueras arrived later, and followed the session from a room next to the hemicycle to guarantee sanitary measures, since the Session Room was all occupied by the deputies, who are distributed between the seats and the boxes that are usually reserved for the guests and the authorities.

The president of ERC, Oriol Junqueras, released today from the Lledoners prison to attend the investiture of Pere Aragonès in the Parliament of Catalonia.

Oriol Junqueras arrived at around 10:45 a.m. at the Parliament of Catalonia, where an ERC delegation was waiting for him.

“I’m very happy. I suppose you are too, but today I am even more so,” he joked with journalists in reference to the fact that a member of ERC is once again presiding over the Generalitat, 41 years later.

Junqueras has insisted on a broad path with large consensuses and parliamentary majorities to advance towards independence, and has defended: “The great consensuses have to be built in the Parliament and with the whole of society. The referendum will be inevitable.”