Following the patchy performances against Tottenham and Everton, a growing number of Manchester City fans had one big question they wanted Pep Guardiola to answer.

Handily, ahead of Tuesday’s FA Cup trip to Peterborough, Guardiola went into detail about his reasons for moving Bernardo Silva – probably City’s best player this season – out of his midfield three and into the forward line.

When Pep offers a glimpse into his thoughts to this extent it can feel like a privilege and supporters are at least no longer in the dark.

“The impact of Bernardo is so important,” he said. “He is a player who likes to play inside but we struggled a bit in the last games to find him in the position in the middle.

“Normally they try to close a lot of gaps inside and it is not easy to find these players.”

Guardiola went on to explain that Bernardo returning to the right-wing for significant portions of the Spurs and Everton matches was so he could be found in possession more easily, while also citing the absences of Gabriel Jesus and Jack Grealish from his attack as factors.

“I have to settle sometimes and figure out where the spaces are and try to increase the guys close to the box creating a lot of problems,” he continued.

“But I said many times to Bernardo, many times when you are playing middle and you struggle to get the ball you can drop to the sides, right, left – try to be involved with the ball.”

Much of this does check out and, as you would expect given Guardiola’s footballing vision, the focus is exclusively on how City fare with the ball and finding solutions in that context. 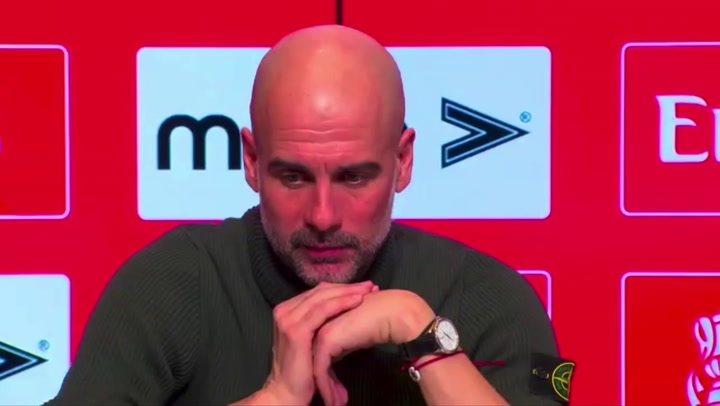 But it feels like a number of the problems in the past two games have come when the Blues were not in possession and lacking what Bernardo gives them in midfield in those moments.

“He is a key player for us for many reasons, for the work ethic, he adjusts to playing six roles – up-front, holding midfielder, winger both side, false nine,” Guardiola said. “The alternatives are massive. He is massively important.”

The impression is that those massive alternatives have led to Bernardo’s vital work ethic being deployed ineffectively, with Ilkay Gundogan and Kevin De Brunye failing to make up the shortfall to leave Rodri and the defense exposed.

In the Premier League this season, Bernardo averages 1.58 tackles per 90 minutes, comfortably ahead of De Bruyne (1.12) and Gundogan (1.01) according to FBref.

In terms of dribblers tackles, Bernardo is on 0.85, again the best of the trio and a statistic that feels pertinent having seen opponents stream through central areas over the past two weekends.

The most visible facet of Bernardo’s work rate is his tireless pressing of opponents. He averages 15.7 pressures per game, although De Bruyne is actually slightly ahead of this on 15.9. De Bruyne’s also leads the way on recoveries with 7.5 per 90 compared to Bernardo’s 6.8, with Gundogan lagging on both metrics with 9.33 and 5.97.

See also  How does 5G interfere with airplanes?

But the Germany international also has value defensively, as a player with superb positional awareness who reads what is unfolding around him astutely. He is the only member of the trio to average above one interception per game, although Bernardo tallies 0.97 ahead of KDB’s 0.59.

This paints an overall picture of Bernardo as the perfect all-rounder. His tenacity of him in the tackle is unmatched by his rivals for the number eight positions at City. Although they are very different specimens, he gets close to De Bruyne in terms of combative physical output, while his game awareness of him is not far shy of Gundogan’s.

As a key period of the season looms and he welcomes back some key figures from injury, Guardiola is right in saying Bernardo can play in six positions. But for City to get the full benefits of an incredible player’s talents, there is one where he needs to be.

What do you think is City’s best midfield combination? Follow the City Is Ours editor Dom Farrell on Twitter to get involved in the discussion and give us your thoughts in the comments section below.

Crystal Palace vs Manchester United prediction and odds: Back Reds to extend their fine run at Selhurst Park