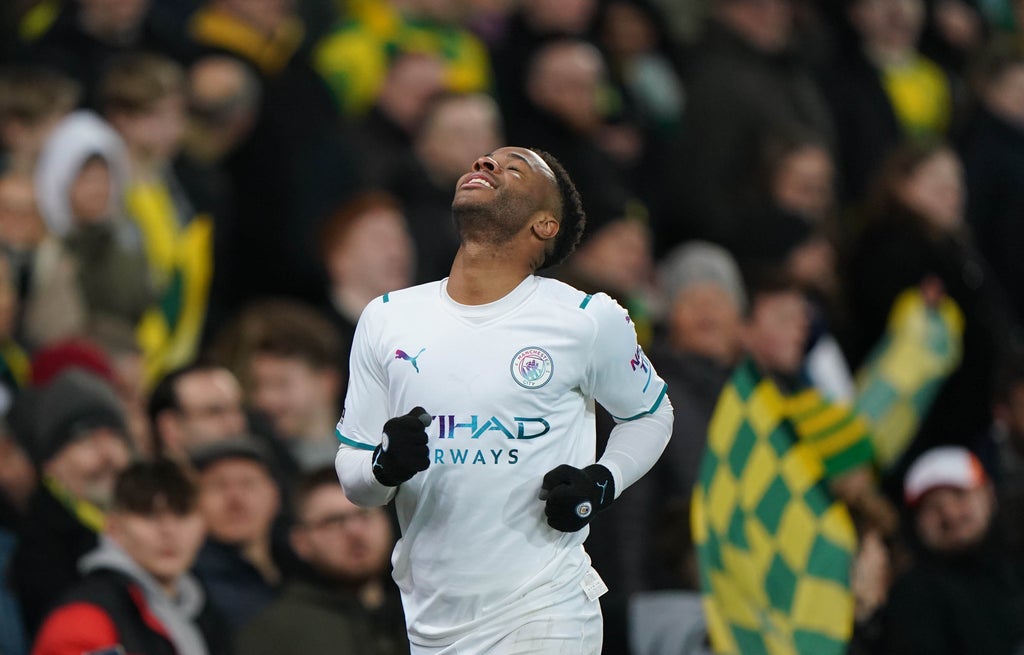 The visitors secured a 4-0 victory at Carrow Road, Sterling opening the scoring with a fine finish before heading in after Phil Foden had doubled the lead early in the second half.

He completed his hat-trick in the last minute, tapping in the rebound after he saw a penalty saved by Norwich goalkeeper Angus Gunn.

The win sees City open up a 12-point lead at the Premier League summit, having played two more games than closest challengers Liverpool.

Guardiola was full of praise for Sterling, who has now scored eight goals in his last eight appearances against the Canaries.

“For his confidence it will be massive, the first goal is brilliant, when Raheem executes without thinking he is excellent,” he said.

“I am so happy for him because strikers need to score for confidence for the next games. The second goal was a good cross, Ruben (Dias) was brilliant and was there but in general he (Sterling) was active and made good touches.

There were warning signs for the home side in the opening five minutes as Foden scored at the third time of asking only to be flagged offside before Bernardo Silva’s strike came back off the inside of the post and into the grasp of Angus Gunn, who then held an Ilkay Gundogan header as City looked to strike early.

Norwich rarely threatened but did hit the post through Captain Grant Hanley, although Guardiola felt his side were never in danger of being pegged back.

“We are going to expect to have difficulties in the Premier League. We arrived here in the best form of Norwich,” he added.

“They had one or two chances but before that we have two or three chances to get a clear advantage.

“It helped us by scoring the second so early, it helped us control the game. I was very pleased with the performance of all the team, the togetherness has shown again, this is important but of course they could have scored a goal but in general we had many more chances than them.”

While Sterling collected the match ball, it was Foden’s effort just two minutes after the interval that Norwich boss Dean Smith singled out.

“A tough night, I’m frustrated with the manner of the goals we conceded,” he said.

“We can’t legislate for mistakes, they happen. We stayed in the game and had a couple of chances ourselves.

“The moments were few and far between against a team that control possession really well but the second goal probably killed the game for me, it flattened the atmosphere.

“It was just a poor goal to concede and a poor time to concede it as well. We felt at 1-0 we would get more opportunities in the second half and you have to stay in these games as long as you can.”

Smith also bemoaned the decision to award City a “pathetic” penalty in the closing stages as substitute James McAtee went down in the box.

“It is never a penalty, and I told Andre (Marriner) afterwards it was a pathetic decision.

“That has never been a penalty, it does not seem to bother the officials to give penalties at 3-0.”