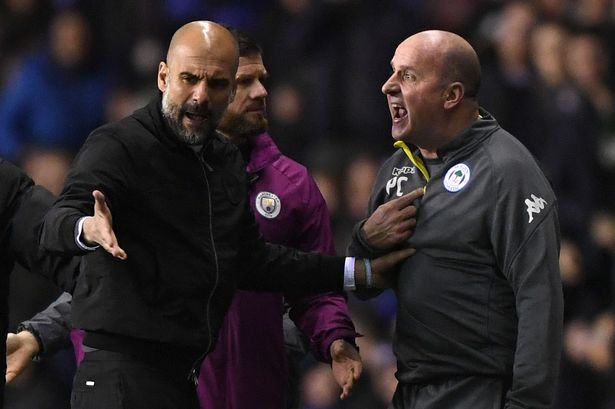 Pep Guardiola says there will be no angry reaction if his Manchester City team are facing another FA Cup shock tomorrow night.

The Blues boss famously hit the roof when his team struggled at Wigan in the fifth round defeat in 2018, despite being 16 points clear at the top of the Premier League in what was to provide a record-breaking campaign. The City documentary “All or Nothing” captured the Catalan shouting at his players at half-time after Fabian Delph’s red card had reduced them to ten men against the League One side, even though the game remained goalless at that point.

It was the last time City suffered a giant-killing in a cup match, with Championship strugglers Peterborough next in line to attempt to de-throne the league leaders in tomorrow night’s fifth-round tie at London Road. Guardiola has already warned his team that, unless they take the same approach as they normally do to Premier League games, they could find themselves in trouble, as they were before easing through against Newport and Cheltenham in recent seasons.

“We’ve been there many times,” he said. “I think we played incredibly well against these lower teams – remember Newport with my friend Michael (Flynn, the Newport manager), and Cheltenham 1-0 down? We know it, we feel it. It will be freezing and it will be different. We know it but in general we’ve done really well.”

But even if things do go wrong, Guardiola says there will be no angry scenes like those at Wigan, when he clashed with Latics boss Paul Cook in the tunnel before confronting his players. He says he has mellowed since then, simply because his trust in him in his players has grown with every trophy they have won, and every adverse situation they have overcome.

“I have changed, my approach has changed, I know them much better, I understood as I get older that they want to do well,” he said. “When we lose games, I listen to the former players, they lost games but they wanted to do well in front of 80,000 people, not because they didn’t want to do it.

“There’s a moment after the game, I’m not cool or clear enough and speak to the players, there are too many emotions. We attack incredibly well and we sit back.

“Maybe I learned to go home and we’ll talk to the team about what you feel is the real game. 90 minutes is the most important part of the week but it happens. Even in Barcelona, ​​I said something that I regretted. It can happen a lot. Defeat in a situation, you have to go home analyze and I was wrong.

“Sometimes you have to take a bit of time, have to be cold and clear on what has happened, after the game it’s over, you can’t change it. you have to improve for the next one. To prepare for Peterborough we have to talk about Everton. Everyone looks for reasons. Be calm, wake up, good breakfast,

“Depends on how we played, sometimes immediately and others we need more time.”