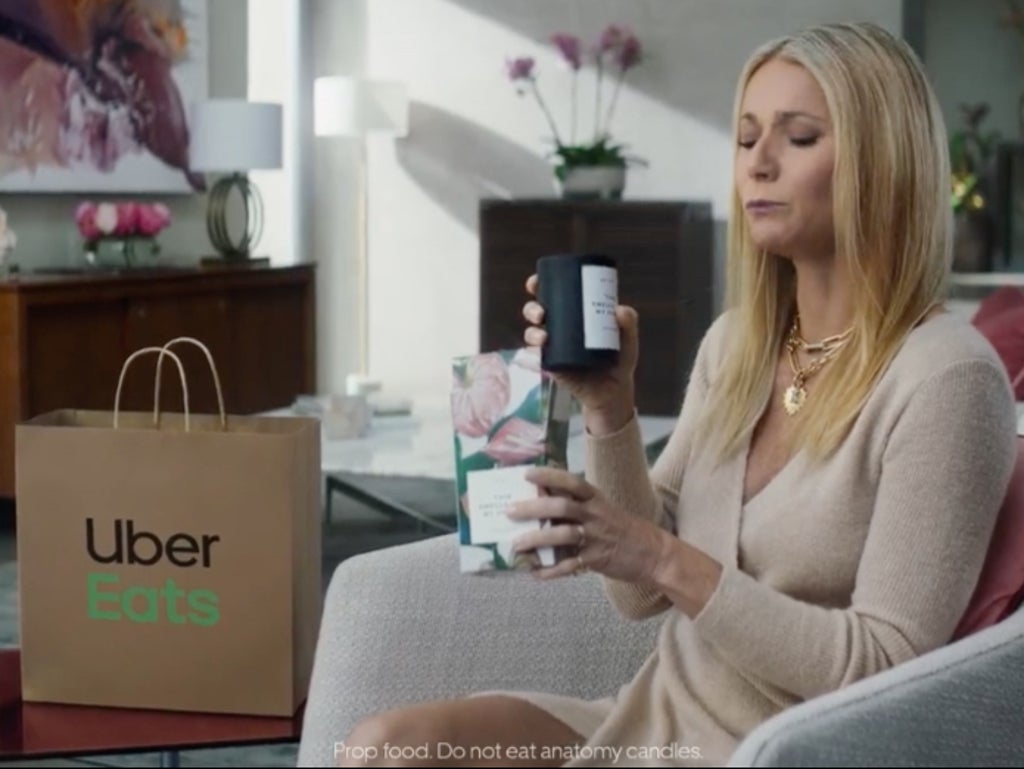 Uber Eats has amused and disgusted viewers after humorously proving why the expansion of its delivery service beyond just food may take some getting used to.

Ahead of Super Bowl LVI, Uber Eats enlisted the help of stars including Gwyneth Paltrow, Jennifer Coolidge and Trevor Noah to try out its latest product offerings, which it has described as “don’t-eats”.

Unfortunately, as the new Super Bowl commercial, which aired Sunday, showed, the celebrities weren’t quite sure what to make of the items delivered in their Uber Eats orders, as they attempt to eat products ranging from a stick of deodorant to a tube of lipstick.

In Paltrow’s skit with the brand, the Goop founder can be seen receiving one of her infamous Goop vagina candles in her Uber Eats delivery.

“This candle tastes funny,” Paltrow admitted as she took a large bite from the side. “Not bad, but funny.”

In Coolidge’s commercial, The White Lotus star shared her confusion after she received a lipstick delivered with her Uber Eats order.

The actor then took a few tentative licks of the product before biting the tip off completely, at which point she declared it “tastes like purple”.

In a separate Super Bowl teaser, Noah had also found himself befuddled by the delivery of a stick of deodorant with his Uber Eats delivery, with the commercial showing the comedian about to put the deodorant on correctly – before deciding to take a bite instead.

Unfortunately, Noah’s experience wasn’t as positive as Coolidge’s or Paltrow’s, as he could be seen chewing the deodorant in disgust.

On Sunday, the brand aired the full version of its Super Bowl commercial during the big game, in which regular customers got confused and tried to eat diapers, a dish sponge, and cat litter, while Noah bit into a light bulb and Nicholas Braun tried some dish soap, which he admitted “tastes bad.”

“If it was delivered with Uber Eats, does that mean I can ‘Eats’ it?” Coolidge asked, while holding aluminum foil.

On Twitter and Instagram, the brand joked: “Now delivering Eats. And Don’t Eats. Please, don’t get them mixed up!”

The adverts proved to be a hit with viewers on social media, as many people expressed their amusement, and horror, over the mishaps.

“This is that rare combo of being a good ad that also made me want to throw up,” one person admitted, while another said: “I genuinely just am in awe.”

Others were both pleased and grossed out by Braun’s cameo in the commercial, with one person tweeting: “Nick downing that dish soap made me nauseous.”

“All I have to say is they got Nicholas Braun and Jennifer Coolidge in the same kitchen,” another person wrote.

However, someone else quote-tweeted the ad and asked: “What the f**k is happening?”

According to Georgie Jeffreys, director of marketing for Uber Eats, who spoke to Variety, the ads are meant to market the fact that the company has “gone from delivering restaurant food to retail, alcohol, convenience goods – all kinds of commerce”. In New York and Los Angeles, this means that customers can also order products such as Goop candles and vibrators from the wellness brand.

As for the choice to feature the celebrity trio, Jeffreys said Uber Eats “looked for talent you don’t often see in commercials” and that it wanted the commercials to be “unpredictable”.