Skip to content
Home News Pence: Trump is ‘wrong’ to say the election could be overturned 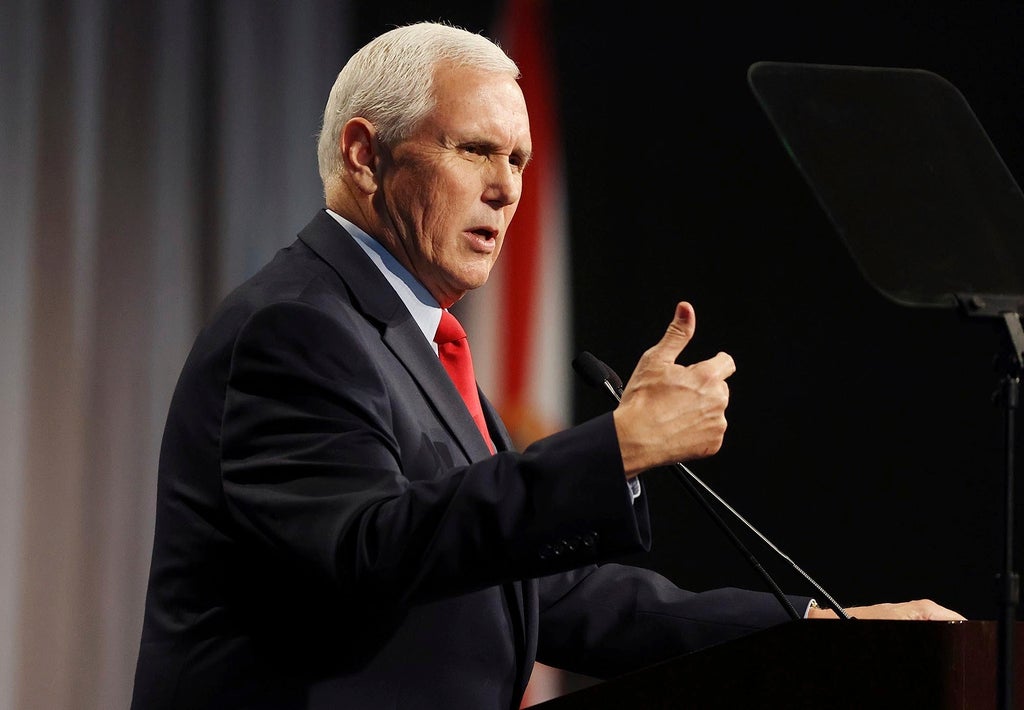 In a speech before a meeting of the conservative Federalist Society in Florida on Friday, Pence addressed Trump’s intensified efforts this week to promote the false narrative that, as vice president, he had the unilateral power to prevent President Joe Biden from taking office. .

“President Trump is wrong,” Pence said. “He had no right to annul the election.”

Pence’s statement marked his most forceful response yet to Trump, who spent his post-presidency feeding the lie that his 2020 campaign was stolen. And it comes as Pence begins to lay the groundwork for a possible 2024 run for president, which could put him in direct competition with his former boss, who is also teasing a comeback race.

The relationship between the two men took on a new dynamic this week as Trump stepped up his attacks on Pence.

In a statement Tuesday, Trump said the committee investigating the deadly Jan. 6 attack on Capitol Hill should investigate “why Mike Pence did not return votes for recertification or approval.” And on Sunday he criticized Pence, falsely stating that he “could have nullified the election!”

The Vice Presidents play only a ceremonial role in the counting of Electoral College votes, and any attempt to interfere with the count would have represented an extraordinary violation of the law and an assault on the democratic process.

Pence, in his Friday remarks to the group of lawyers in Lake Buena Vista, described January 6, 2021 as “a dark day in the history of the United States Capitol” and framed his actions that day as consistent with his duty as a constitutional conservative.

“The American people should know that we will always uphold our oath to the Constitution, even when it would be politically expedient to do otherwise,” he told the group on Friday. He pointed out that, according to Article II Section One of the Constitution, “elections are held at the state level, not by Congress” and that “the only function of Congress with respect to the Electoral College is to open and count the votes cast and certificates”. by the states No more and no less.”

He went on to call out those who have insisted that is not the case.

“Frankly, there is no more anti-American idea than the notion that anyone could elect the American president,” he added. “According to the Constitution, he had no right to change the result of our election. And Kamala Harris will have no right to overturn the election when we win it in 2024.”

The audience applauded Pence’s line about beating Democrats in the upcoming presidential election, but remained silent when Pence earlier said “Trump is wrong.”

As Pence responded to Trump in Florida, Republican officials gathered in Utah to further align themselves with the former president. The Republican National Committee censured Representatives Liz Cheney of Wyoming and Adam Kinzinger of Illinois for serving on the committee investigating the January 6 uprising. The GOP also attacked the panel for leading a “persecution of ordinary citizens involved in legitimate political speech.”

Pence was inside the Capitol on Jan. 6, presiding over the joint session of Congress to certify the presidential election, when a mob of Trump supporters violently stormed inside, assaulting police officers and chasing lawmakers. Pence, who released a letter moments before the session began making it clear he had no authority to override the will of the voters, was led to safety as some protesters chanted “Hang Mike Pence!”

The former vice president, in his comments Friday, acknowledged the lingering anger among many in Trump’s base, even as he said it was time to “focus on the future.”

“The truth is that there is more at stake than our party or political fortunes,” he said. “Men and women, if we lose faith in the Constitution, we will not only lose the elections, we will lose our country.”

Trump aides did not immediately respond to requests for comment on the speech. Trump issued a statement shortly afterward that criticized the Jan. 6 committee, but did not particularly mention Pence.

The escalation of Trump’s rhetoric comes as he comes under increasing scrutiny from the committee, which has now interviewed hundreds of witnesses, issued dozens of subpoenas and obtained a host of government documents that Trump tried to keep hidden.

It also comes as a bipartisan group of lawmakers pushes to update the Voter Count Law to remove any ambiguity about the vice president’s role.

So far, Pence has tried to thread his Jan. 6 actions, which continue to anger much of Trump’s base, posing a potential complication if he runs for president in 2024.

In recent months, he has generally refrained from voluntarily raising the events of that day, but has defended his actions when pressed, saying he was fulfilling his constitutional role. Last year, he said in a speech that he “will always be proud that we did our part on that tragic day to reconvene Congress and did our duty under the Constitution and laws of the United States.”

He has also accused Democrats and the media of continuing to focus on the insurgency to score political points for Republicans and divert attention from Biden’s agenda.

While a basic statement of fact, Pence’s decision to describe Trump as “misguided” was especially significant given Pence’s position in the White House. As Trump’s vice president, Pence was exceptionally respectful of him, never publicly expressing disagreement with him and defending even his most controversial actions.

After spending several months in hiding after leaving the White House, Pence has returned to the public spotlight. He launched his own political advocacy group and has been traveling the country, visiting early voting states, making speeches and organizing fundraisers for midterm candidates. Pence, unlike some potential 2024 presidential contenders, has notably refused to rule out running against Trump. He is also working on a book.

Democratic Rep. Bennie Thompson of Mississippi, chairman of the Jan. 6 caucus, and Democratic Rep. Adam Schiff of California said they plan to call Pence to testify as part of their investigation. So far it is not clear what Pence will do.

Millionaire his developers after agreeing that £4m home is too close to his neighbours.