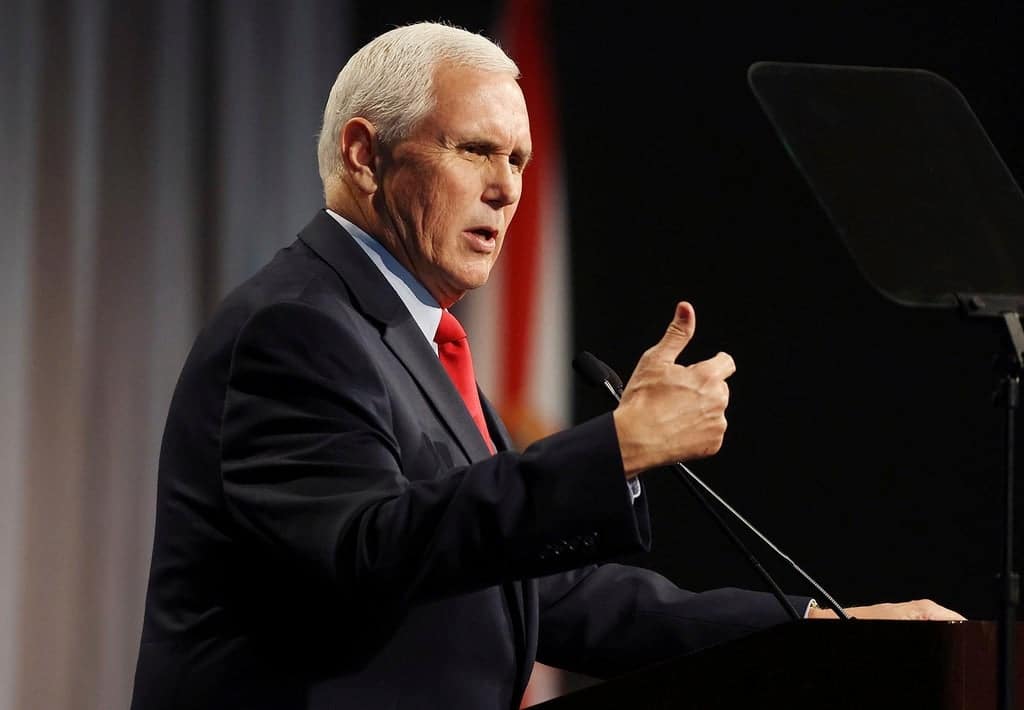 Vice President Mike Pence was taken to an underground Senate loading dock after rioters breached the US Capitol on Jan. 6, 2021, and spent four to five hours there under guard with his wife and daughter, the Secret Service confirmed Monday for the first time.

The disclosure verifies reporting by ABC journalist and author Jonathan Karl and came in testimony by the liaison officer for Pence’s Secret Service security detail against the second defendant to face trial in the Capitol attack. Couy Griffin, a 48-year-old Republican elected official from Alamogordo, NM, and founder of a pro-Donald Trump grass-roots group had challenged US prosecutors to prove Pence’s whereabouts as he defends himself from misdemeanor counts of trespassing and disorderly conduct on grounds restricted from the public because of the presence of a Secret Service protectee.

Karl, ABC’s chief Washington correspondent, said last November in promoting his new book, Betrayal: The Final Act of the Trump Show, that he had seen images taken by a White House photographer with Pence that day showing where he, his wife, Karen, and daughter Charlotte Pence Bond waited out the Capitol breach. Supporters of President Donald Trump broke into the building, forcing the evacuation of Congress and Pence as they met to certify the electoral college results.

“It is wild to see that he was in a loading dock in an underground parking garage beneath the Capitol complex,” Karl said during an appearance on The Late Show with Stephen Colbert. There was “no place to sit, no desk, no chairs, nothing.”

Testifying under oath Monday, Secret Service Inspector Lanelle Hawa confirmed that the “secure location” to which Pence was evacuated at 2:26 pm from the Senate chamber was a loading dock under the Senate plaza connected to the Capitol via the attached underground Capitol visitor center .

“We had unknown individuals who were breaking through a security barrier, a site where we had protectees. . . . So it becomes a security issue when they [rioters] were surrounding a secure site and . . . potentially taking away options for our routes out,” said Hawa, who is a veteran of the force for 23 years and served as the Pence security detail’s liaison for his trip to the Capitol.

The testimony resolves a mystery over Pence’s precise location during the attack, which defense attorneys for Griffin had sought to exploit and won permission from a federal judge in Washington to probe with a live Secret Service witness over the Justice Department’s objections. Prosecutors had argued that revealing Pence’s exact whereabouts could endanger future heads of state and other Secret Service protectees at the Capitol, and that agency would not disclose any details for national security reasons.

But US District Judge Trevor McFadden ruled late last week that the defense had a bedrock right to challenge the government’s evidence establishing that Griffin violated restricted grounds.

“I don’t think the government is entitled to some Secret Service exception or sensitive information exception from providing its case beyond a reasonable doubt,” McFadden reiterated Monday before Hawa took the witness stand.

McFadden, a former Virginia police officer and Justice Department criminal division official under the George W. Bush and Trump administrations, earlier admonished prosecutors for a sloppy mistake last year in which they claimed for months in court filings that vice president-elect Kamala Harris was also present on Capitol grounds during the attack. Prosecutors later acknowledged that Harris had in fact left the vicinity beforehand and cleaned up their error in charging and other documents.

But what officials disclosed of Pence’s whereabouts may not be what the defendant hoped.

Prosecutors rested their case after Hawa’s testimony, but McFadden called her to return Tuesday morning.

Griffin, the Cowboys for Trump founder and an Otero County commissioner, was arrested in Washington on Jan. 17, 2021, after allegedly posting a video on Facebook of himself on the inauguration stage next to the Capitol within the barricaded perimeter of its grounds during the Jan. 6 siege.

Prosecutors entered evidence Monday videos recording Griffin’s activities in Washington and his statements explaining his conduct before and after, including several taken by a witness who was granted immunity, a videographer and friend who traveled with Griffin to Washington.

The videos show Griffin on Jan. 6 climbing over a stone wall marking the Capitol’s security perimeter and climbing over a sideways metal bike rack within it, and spending more than an hour perched on the front railing of the inaugural stage with a bullhorn, ignoring the lingering smell of pepper spray and leading the crowd below in prayer.

In a Jan. 14, 2021, county commission meeting, Griffin said that he knew “Mike Pence had certified a fraudulent election” before he walked toward the Capitol grounds, and that he was part of a crowd that “just pushed through” plastic mesh fencing securing the inauguration area, albeit toward the back.

In bond proceedings but not in Monday’s trial, prosecutors have cited videos in which Griffin also said he planned to return armed to Washington for Joe Biden’s inauguration with his “.357 Henry big boy rifle” and “single action revolver” and rhetorically suggested the blood of political foes could be spilled at the Capitol in defense of the right to bear firearms.

“You want to say that was a mob? You want to say that was violence? No, sir. No Ma’am,” Griffin said in a video recorded Jan. 7 cited in government filings. “No we could have a 2nd Amendment rally on those same steps that we had that rally yesterday. You know, and if we do, then it’s going to be a sad day, because there’s going to be blood running out of that building. But at the end of the day, you mark my word, we will plant our flag on the desk of [House Speaker] Nancy Pelosi and [Senate Majority Leader] Chuck Schumer and Donald Trump if it boils down to it.”

Griffin rejected prosecutors’ offer to plead to a lesser charge and serve probation. Instead, he waived trial by jury and bet his freedom on a bench trial before McFadden, who Trump appointed to the federal bench in 2017.

“I did nothing violent on that day, I broke nothing, I didn’t fight with anybody,” Griffin has told the court in a pretrial hearing. “All I did was stand on the steps of the Capitol and pray with people, that’s it.”

Griffin has claimed his prosecution is politically motivated, arguing that unlike the vast majority of more than 750 people charged, he is not accused of assaulting police, damaging property or even entering the Capitol. But his defense of him’s claim that prosecutors must prove that Griffin knew that Pence was present at the Capitol or planned to return also poses ramifications for hundreds of others charged with a similar misdemeanor count.

In a pretrial order Friday, McFadden rejected the first argument, saying many others drawn to the Capitol have been charged and that Griffin’s leadership role and more blatant conduct at the scene might rationally merit different handling by prosecutors.

Griffin “ignores the fact that his position as an elected official puts him in a different – and nonprotected – category from other rioters,” McFadden said.

But the judge paid close attention to testimony Monday about whether Griffin knew that he was crossing barriers or otherwise entering areas off limits to the public and the reason the barriers were erected.

Griffin is one of at least 10 people charged in the riot who either held public office or ran for a government leadership post in the two-and-a-half years before the attack, according to an Associated Press tally.

Washington Post has reported that at least 163 Republicans who have embraced Trump’s false claims are running for statewide positions that would give them authority over the administration of elections. The list includes 69 candidates for governor in 30 states, as well as 55 candidates for the US Senate, 13 candidates for state attorney general and 18 candidates for secretary of state in places where that person is the state’s top election official.