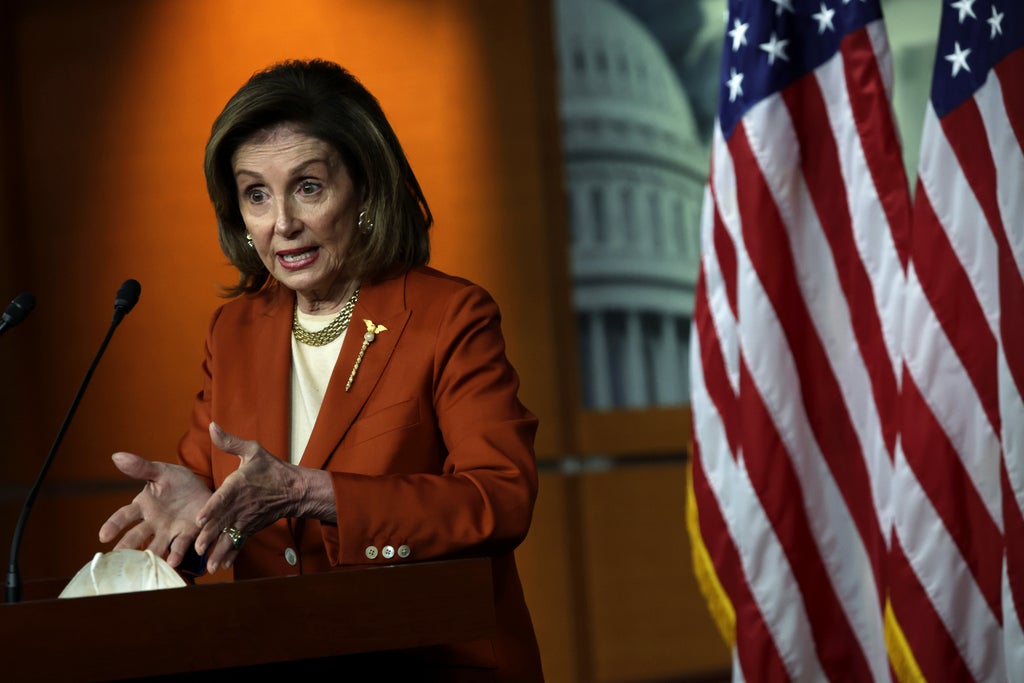 Speaker Nancy Pelosi is once again pushing back against progressives in her party for their rhetoric about defunding the police as calls for reform grow louder with the killing of Amir Locke by police in Minneapolis.

The House Democratic leader was on ABC’s this week on Sunday to address her party’s future ahead of the 2022 midterms, where Democrats face an uncertain path to retaining the majorities in both chambers thanks to souring views of President Joe Biden’s handling of the White House.

Ms Pelosi reiterated that “defund the police” was “not the position of the Democratic Party”, while stressing that Democrats were “concerned about the mistreatment of people” but unwilling to endorse shifting funding away from law enforcement.

“I have sympathy … we’re all concerned about mistreatment of people,” she told ABC’s George Stephanopoulos.

Her remarks were a direct challenge to the support for calls to defund law enforcement agencies from Democrats like Rep Cori Bush, whom Ms Pelosi name-checked in the interview, and activists who have largely given up on the prospect of serious action to reform police departments. in the Democratic-controlled House and Senate.

Ms Pelosi did tout support for the George Floyd Justice in Policing Act, a bill named for George Floyd who like Amir Locke was killed by police in Minneapolis; Mr Floyd’s death led to a murder conviction for Derek Chauvin, the officer seen kneeling on his neck for nine minutes in a video.

Mr Locke’s shooting death at the beginning of February came as a result of a no-knock raid; such tactics are highly controversial as activists argue that there is no reasonable expectation for someone to surrender when their house or other residence is suddenly breached while a person is sleeping.

But that legislation is going nowhere in the Senate, which is split 50-50 between Republicans and Democrats. The two parties have shown little room for compromise on the issue of police reform, however, and many GOP lawmakers openly conflate the protests over Mr Floyd’s murder and the deaths of other Black people in encounters with police to the violent assault on the US Capitol when Supporters of former President Donald Trump attempted to force Congress to overturn the 2020 election.

The Missouri congresswoman and first-term Democratic lawmaker who found herself name-checked by the Speaker of the House on Sunday recently blamed inaction by her own party on a whole host of issues such as the Build Back Better Act and voting rights for their woes heading in to the 2022 midterms, while noting that some members of her caucus have confronted her over her support for reducing funding to law enforcement agencies.

“’Defund the police’ is not the problem,” she told Axios. “We dangled the carrot in front of people’s faces and said we can get it done and that Democrats deliver, when we haven’t totally delivered.”

During her interview on Sunday, Ms Pelosi also dodged questions about whether she would run again for the Speakership role should her party retain control of the House this fall.

“That’s not a question,” she told Mr Stephanopoulos, adding: “My purpose right now is just to win that election … nothing less is at stake than our democracy.”