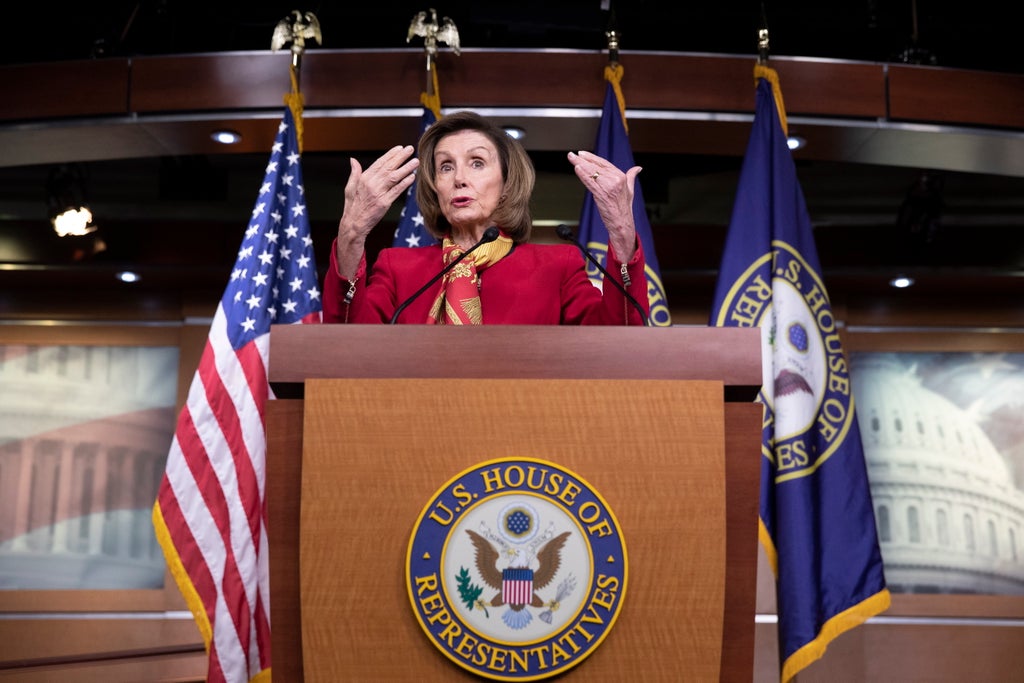 House Speaker Nancy Pelosi hinted at some openness to banning members of Congress and their spouses from trading stocks as both Democrats and Republicans push forward for legislation banning the practice.

Ms Pelosi made the remarks at her weekly news conference on Wednesday.

“I’m a big believer in our committees and we’ve tasked the House administration committee to review the options members are putting forth,” she said. Ms Pelosi also said there needed to be tighter enforcement of the STOCK Act, which ostensibly prevents trading.

“The judiciary has reporting, the Supreme Court has no disclosure, it has no disclosure of stock transactions and it makes important decisions every day,” she said. “I do believe in the integrity of people in public service. I want the people to have that understanding. We have to do this to determine something we see as a problem, but it is a confidence issue and if that’s what the members want to do.”

Ms Pelosi said most people were talking about how a ban affects members but she was also saying that there needs to be disclosure for the Supreme Court. She also noted how people who join the executive branch and divest in their stock don’t pay capital gains taxes.

“It’s complicated and members will figure it out and then we’ll go forward with what the consensus is,” she told reporters. Ms. Pelosi said members were having meetings. “What we’re trying to build is consensus. Consensus.”

Ms Pelosi’s words are a slight – but not complete – reversal of her previous words. In December, reporters Asked her Whether Should be barred from members trading stocks.

“We are a free market economy. They should be able to participate in that,” she said. Ms Pelosi’s husband Paul owns millions of dollars in stock, as the Associated Press reported at the time, though she said she had no prior knowledge of her husband’s trading decisions and she does not own stock herself.

Sen Jon Ossoff of Georgia, who co-sponsored legislation with Sen Mark Kelly of Arizona, said he was optimistic about momentum toward ending trading.

“When I launched this push in the Senate a month ago, a lot of folks thought I was tilting at windmills,” he told The Independent . “This is not a highly complex area of ​​law. And so now we need to hammer out some final text and get it to the floor so we can vote.”

Mr Ossoff beat former Sen David Perdue in a runoff election last year largely on the back of criticizing Mr Perdue for making well-timed stock trades as the coronavirus pandemic spread. Mr Ossoff’s legislation would fine members of Congress their entire salary if they or their spouses buy or sell stock while in office.

“I have invited colleagues in both parties to submit their notes or offer their own proposals by the end of this week,” he said. “The more the merrier.”

But Mr Ossoff’s legislation isn’t the only one pending. Sen Elizabeth Warren of Massachusetts and Republican Sen Steve Daines of Montana have their own legislation.

“I’m glad to see that there’s momentum in every corner for banning members from owning and trading individual stocks. It’s time,” she told The Independent. Ms Warren added that she already had legislation with Rep Pramila Jayapal, the chairwoman of the Congressional Progressive Caucus, in her larger anti-corruption bill she had.

Mr Daines Told The Independent that he preferred his legislation and noted that it is the only bipartisan one.

“We spent some time working out a bipartisan commitment that would for her and work for me would for doing the right thing for the country,” he said. “We gotta restore faith in government.”

Mr Daines said he had been speaking with Republicans about the subject.

“I’ll wait for them to get officially on the bill but we do have some Republicans now who are looking to join as co-sponsors,” he said.

But Sen Tommy Tuberville criticized the idea of ​​banning members of Congress from trading stocks.

“I think it’s ridiculous. They might as well start sending robots up here,” he said. “I think it would really cut back on the amount of people that would want to come up here and serve.” Business Insider reported that Mr Tuberville, a former college football coach, violated the STOCK Act on 132 occasions, totaling $894,000.

Still, Sen Josh Hawley, a Republican from Missouri who proposed legislation that would require any members or their spouses who violate the act to return the money to the Treasury department, said he was pleased.

“She’s feeling the heat,” he said as he got on the Senate subway.