Skip to content
Home News Paula Badosa: “I wake up every day with the illusion of being number one; otherwise, I would not get out of bed” | The spar 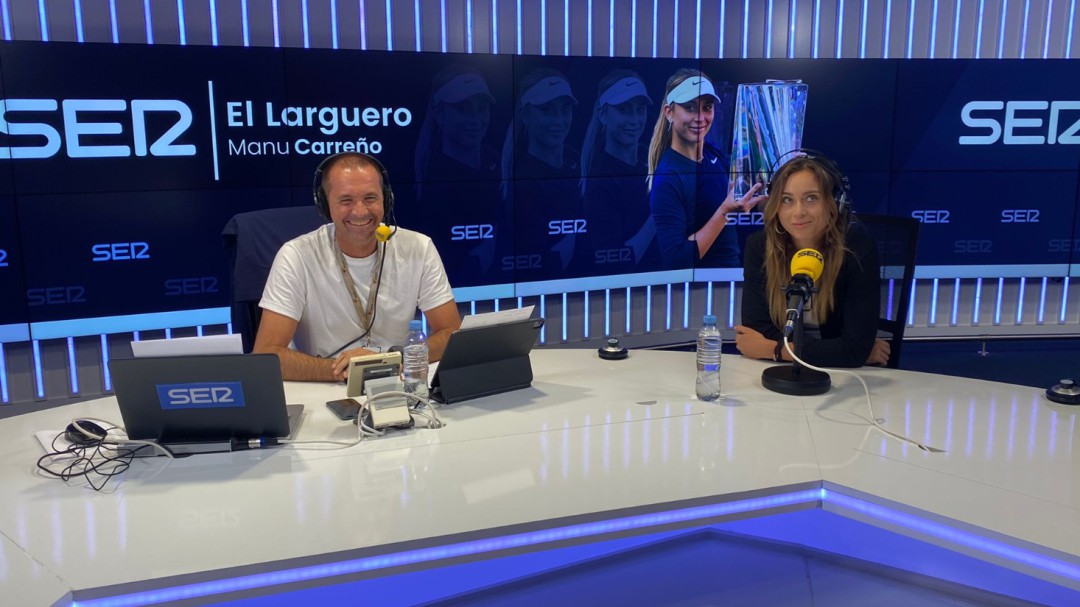 Luxury guest at El Larguero. One of the greatest exponents of Spanish women’s sport stopped by the program for talks with Manu Carreño about her stellar year. Paula Badosa explained what were the keys to her progress to number 7 in the ranking. In January, the tennis player was ranked number 72. After a year of success winning a tournament of the importance of Indian Wells, Badosa has managed to excite Spanish sports fans.

How was your vacations?

“Very few days, but I have taken advantage and come to see you. I have had 10 days of vacation, but it has been intense. It has been long for me. I have been to the Maldives, Dubai and Florence ”.

Which Grand Slam would you prefer to achieve?

“Roland Garros for tradition. I really like to play on clay, although I have always had the doubt with New York.

Was it difficult for you to decide between Spain and the United States?

“Not because I grew up here and my whole life has been in Spain. I have a special affection for the United States and I think it is reciprocal “.

Is tennis so addictive that you go back to training before the time?

“I started on Sunday, although I started on Monday. I missed the adrenaline a lot. It is a part of suffering, but you end up missing it ”.

A little bird told me that you like to cook …

“I am taking care of them and I have made them a little salmon and a salad. Then I put it on Instagram. It is difficult for me to cook because she arrived very tired ”.

Do you take advantage of the trips to get to know the cities for the rest of the year?

“Very little and I regret it. We go to such beautiful cities and with so much to discover that I don’t have time. It is a goal that I have for the future. The disconnection part is very important ”.

Which city has treated you the best?

“As in Madrid nowhere. It is my favorite tournament. I was very surprised in Mexico and they gave us a lot of support “

Now Australia… You don’t have good memories of last year.

“It was not a good memory and it is one of my favorite countries, but the experience was not good. When I got off the plane they confined me and I tested positive. I came from preparing for 6 weeks. I couldn’t move much during the 21 days. “

How have you experienced this rise in the ranking?

Do many photos come to you and ask you on the street now that you are in seventh place?

Tell us about that stage in which you considered leaving tennis

“It is similar in terms of expectations. Now I am prepared and I have gone through many processes in my life and at that time I was not prepared. The pressure got the better of me and the anxiety overcame me. The situation got over me “

Is it easier to recover from losses now with another environment?

“For me it is positive. I remember talking to you about the Roland Garros elimination and telling you that it was the hardest defeat of my life. Now I think that loss helped me win Indian Wells. The message is: you learn from failure ”.

How have you improved your mental health? Can this facet be trained?

“You carry it inside and at the same time you can train. The mental part is the same as the gym. If you don’t train, you don’t improve. I like it because until recently I did not do it because of what they will think. Since I decided to talk about it and normalize the situation, I have done much better. Any fear that I tell helps me feel better sportingly and personally ”.

What result has to be given so that next year you return to the study?

“In a year I look better. I only come back next year if I finish in the top 5 ”

“I would be 13 or 14 years old in the Godo tournament. I put my hand on him and Rafa hit me. I said I wasn’t going to wash my hand. It is an inspiration “

What makes Rafa so special?

“He is capable of moving people by playing tennis and very few people achieve that. It has something very special and that is very difficult. I would like to play against him, but I don’t know if I could ”.

Your happiest moment this season …

“The moment of the final with Azarenka”

The hardest moment of the season for you was …

“The defeat at Roland Garros. The Tokyo thing was physical, but the Paris thing hurt me a lot “

How was the return to training with Jorge García?

“We have lived together for a long time and my first WTA point was won with him. We have a very good relationship and he has been in very important moments for me ”.

What do you think is the great improvement that has led you to number 7?

“I have made a big step mentally. It has been seen in very even matches. I think that physically and tennis I have taken a step forward. In one year now the level is much higher “

See also  Friends' touching tribute to 'life of the party' Zac, 28, who died days after getting married

“We love you very much …”: Paula Badosa’s mother and sister left her an emotional message

What was it like to measure up to Muguruza for the first time?

“I think Garbiñe played a great game. It was difficult for me because I have seen it Grand Slams and I have admired it a lot. I was looking at her a lot and it was mentally difficult for me to separate that. “

What do you have better than Garbiñe?

“We have aggressive styles, but I don’t know if I have something better than her. She is the good one and I am trying to get closer. Hopefully in 4 years I will be where she is now ”.

Would you like to be number one? Is it your goal?

“I’m not going to lie, I wake up every day with the illusion of being number one, otherwise I would not get out of bed. If I don’t show up, nothing happens, but I get up for it ”.

How are you seeing the stellar progress of Carlos Alcaraz?

“We have the bad luck that we have had a Rafa Nadal and everything seems to us little. That has spoiled us, but Alcaraz is not normal for me. He is a child who was born to win ”.

On the Peng Shuai case …

“I have to admit that when this news came out I had a bad time. I appreciate that the WTA of the steps they play, since they are to protect the tennis players. I don’t know very well what is happening, but I hope it returns to normal ”.