Priti Patel has challenged those against her plan to send migrants to Rwanda to come up with a better idea to tackle small boat crossings in the Channel.

Writing a joint article in The Times with Rwandan foreign minister Vincent Biruta, the Home Secretary reiterated that her controversial plans were “bold and innovative” after religious leaders slammed the move.

The Archbishop of Canterbury Justin Welby deemed the plans ungodly, while his counterpart in York also used his Easter sermon to deride the idea as “so depressing and distressing”.

But in the joint article, Ms Patel and Mr Biruta said: “We are taking bold and innovative steps and it’s surprising that those institutions that criticize the plans fail to offer their own solutions.”

Earlier, Cabinet minister Jacob Rees-Mogg had suggested that the Archbishop of Canterbury had misunderstood the aims of the policy.

He was joined in his criticism by the Archbishop of York Stephen Cottrell, who said: “We can do better than this.”

He added: “After all, there is in law no such thing as an illegal asylum seeker. It is the people who exploit them that we need to crack down on, not our sisters and brothers in their need. We don’t need to build more barriers and cower in the darkness of the shadows they create.”

But speaking on Radio 4’s The World This Weekend programme, Mr Rees-Mogg said: “I think he misunderstands what the policy is trying to achieve, and that it isn’t an abandonment of responsibility, it is in fact a taking on of a very difficult responsibility.

He said “90% of people coming are young men who by coming via people traffickers are jumping the queue for others”.

Mr Rees-Mogg added: “They are in doing so not only risking their lives but supporting organized crime. What we need to do is focus on legal routes into this country, of which there are quite a number.”

Some Conservative MPs took to Twitter to say religious leaders should stay out of politics, suggesting the two archbishops had overstepped the mark.

However Tory MP for Sutton Coldfield and former minister Andrew Mitchell said although he had “enormous sympathy” with the Government, the policy was unlikely to achieve its aims.

He said: “What I’m worried about with the Rwanda policy is it won’t achieve what they are after, it’s also likely to be horrendously expensive, and we have to have a great care at this time for taxpayers’ money.”

He added: “The public are right to say we do not want feckless benefits seekers masquerading as economic migrants trying to come to our country illegally and without permission and of course, we all sign up to that.

“And if they’re processed here, and they’re found not to have a case for asylum, then by all means, send them off to a third country that will take them.

“But the danger is that we won’t be doing what we have always done since the 16th and 17th century with the Huguenots through the Syrians, as I said, under David Cameron, through the Ukrainians now. We won’t have been a beacon in a terrible and difficult world for those fleeing persecution who can always rely upon the Brits – where they are genuinely fleeing persecution – to come to the rescue.”

Ms Patel said she expects other countries to follow the UK’s example, suggesting Denmark could be among those to reproduce the Government’s “blueprint”, while the Home Office insisted its approach is not in breach of refugee agreements. 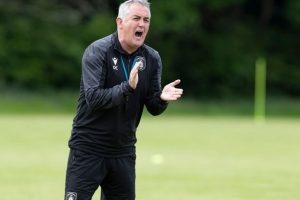