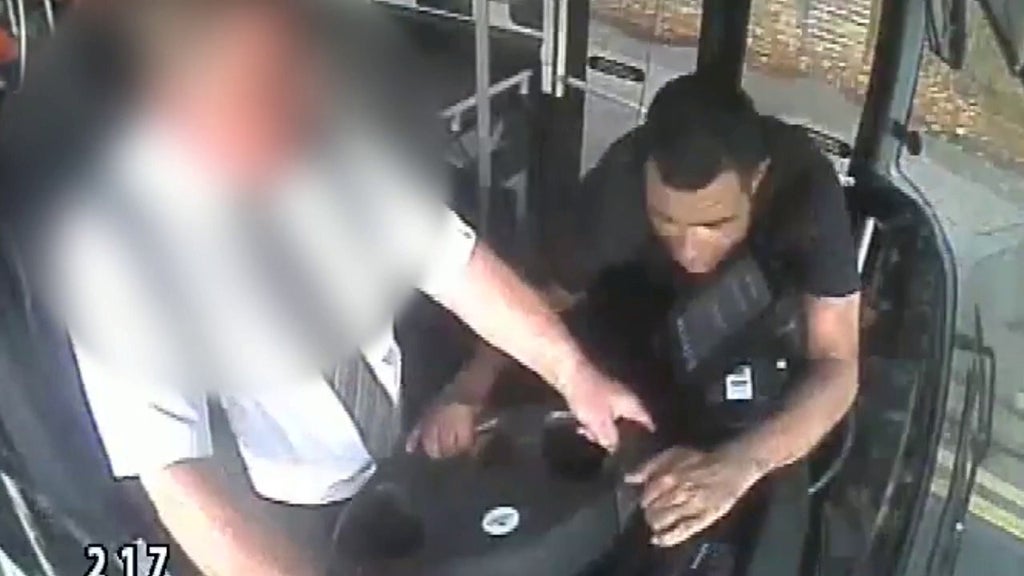 Shocking footage shows the moment a crazed passenger grabbed a bus steering wheel as it traveled along a busy road before he was detained by an off-duty cop.

Earl Haye, 48, narrowly avoided causing a rush-hour crash when he tried to take control of the bus in Derby Road, Nottingham on November 1 last year.

Haye also went on a rampage trying to get into people’s cars and at one point he jumped onto a car and punched through the windscreen.

He then got into the back of another car that was slowly moving along before being pulled out by police, who arrived at the scene.

Haye, of St Ann’s, Nottingham went on to assault four police officers as they wrestled him down in the street in front of horrified onlookers.

But he was spared prison after being sentenced to 13 months imprisonment, suspended for 18 months at Nottingham Crown Court on Tuesday (22/3).

A court heard the drama began at 7.15am when Haye boarded a bus and began shouting and swearing at the driver.

His erratic behavior was seen by an off-duty sergeant sat at the back of the bus, who then identified himself to Haye as a police officer.

Sergeant Graham Whitt escorted Haye off the bus but he then boarded a second bus and briefly grabbed hold of the steering wheel.

CCTV showed him place both hands on the wheel and attempt to steer it before he then exited the vehicle and ran into moving traffic, where he was almost run over.

Sgt Whitt again jumped into action when he saw Haye approach a woman’s car and try to get in.

He then jumped onto a Peugeot 107 before punching and smashing its windscreen.

With police backup on the way, Sgt Whitt suffered a torn ligament in his finger as he battled to apprehend Haye.

Haye went on to assault three other police officers once backup arrived. Two were bitten on the arm, while another was spat at.

A spit hood was then placed over his head to stop him from biting or spitting on officers again.

Sgt Whitt – who was treated in hospital for his fractured finger after the incident – said he and his colleagues were relieved Haye had been brought to justice.

Recalling the incident, he said: “Something that will stay in my mind for longer than the physical pain is the genuine looks of terror in the faces of members of the public, who by no fault of their own, were involved and forced to watch Haye’s rampage.

“I’m just glad I was in a position to intervene and help prevent a very serious incident.

“As it was, I suffered an injury to my finger. That’s a far better outcome.”

Assistant Chief Constable Steve Cooper, of Nottinghamshire Police, said after the case: “This was an appalling incident that could have been worse had it not been for brave actions of Graham and his colleagues.

“Three police constables swiftly arrived on scene to help detain the man and, regrettably were assaulted.

“We have repeatedly stressed that this is not part of the job and any assault on emergency workers – physical or verbal – will be treated as a crime and dealt with accordingly.

“The safety and welfare of our officers is of great importance and the officers involved in this incident have been given the appropriate support by the force.”