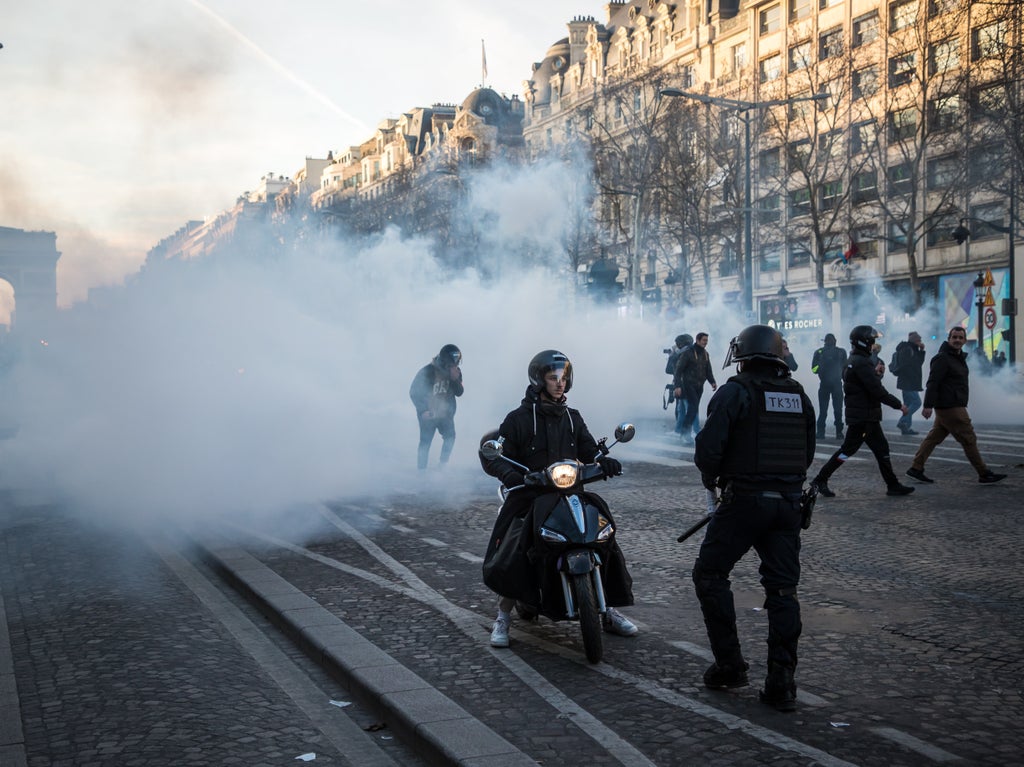 Police fired tear gas on the Champs Elysees in Paris on Saturday as “Freedom Convoy” protesters defied an order to stay away and descended on the capital to demonstrate against coronavirus restrictions.

Inspired by horn-blaring demonstrations by truckers in Canada, dozens of vehicles slipped through a police cordon around the center of the capital and disrupted traffic around the Arc de Triomphe and other key locations. According to reports, a number of Gilets Jaunes (Yellow Vests) activists joined the rally.

Despite police successfully managing to stop around 500 vehicles from entering central Paris, a few dozen broke free from police defenses and climbed onto the roof of their vehicles while parked in the middle of the road.

The convoy, which included cars, trucks and tractors from Lille, Perpignan, Nice and other cities, descended on the capital late on Friday, despite a warning from police that vehicles would be blocked from entering the city centre. Emmanuel Macron, the French president, also called for “the utmost calm” in a speech on Friday.

Protesters were inspired by the so-called “Freedom Convoy” truckers in Canada railing against the Covid-19 vaccine mandate for cross-border traffic. The mayor of Ottawa declared a state of emergency over the “serious danger and threat” posed by the demonstrations.

The French protest comes in response to the government’s introduction of a coronavirus vaccine pass, which requires people to show proof of vaccination to enter public places such as cafes, restaurants and museums. A negative Covid test is no longer sufficient for those who have not had the jab.

Police told reporters that they had arrested 14 people, handed out 337 fines by mid-afternoon and earlier stopped 500 vehicles that were attempting to reach Paris in the morning.

More than 7,000 officers were mobilized to control the protest, reports Reuters, and set up checkpoints. Armored personnel carriers and water cannon trucks were also deployed in preparation for the activists’ descent on the capital.

Not far from the hub of the Paris protest, police also said they had arrested five protesters in the south of the city for alleged possession of sling shots, petrol cannisters, hammers, knives and gas masks.

Jean Castex, the French prime minister, said on Friday he objected to the demonstrators calling themselves a “Freedom Convoy”.

“The right to demonstrate and to have an opinion are a constitutionally guaranteed right in our republic and in our democracy. The right to block others or prevent coming and going is not,” he told broadcaster France 2.

Freedom should not be associated with “virulent attacks against vaccination”, he said, because freedom is not “contaminating others”.

Austria and Belgium have banned such convoys from entering their capitals, with similar demonstrations also emerging in Australia, New Zealand and the Netherlands.

Some 10,000 protesters arrived at Parliament House in the Australian capital Canberra on Saturday, while police in New Zealand’s capital Wellington arrested more than 100 people on Thursday who blocked roads in the city.

In the Netherlands, a separate protest made up of vehicles blocked the entrance to the parliamentary complex in The Hague on Saturday.

They were joined by other activists on foot, brandishing a banner emblazoned with the Dutch words “Love & freedom, no dictatorship.”