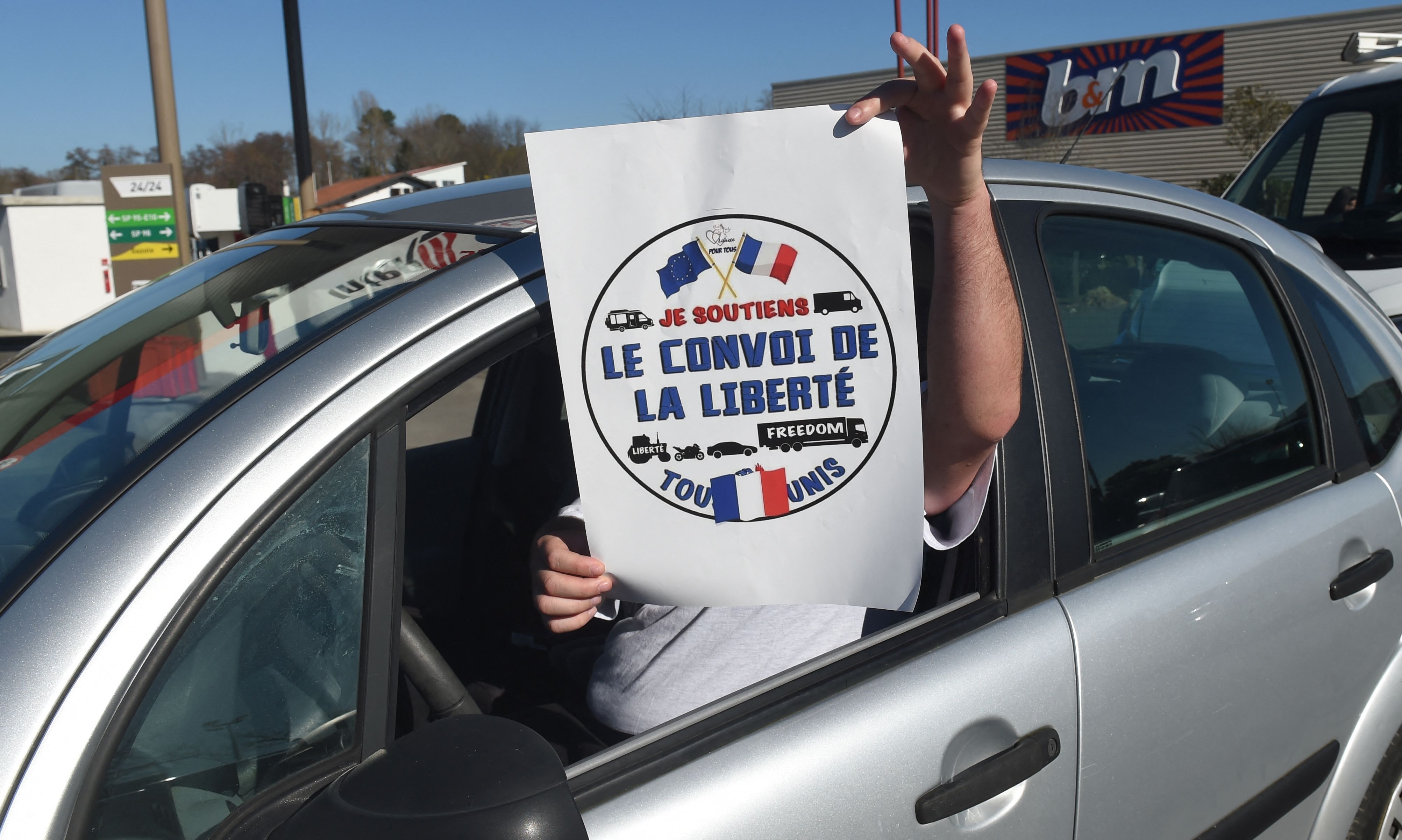 Paris doesn’t want to be Ottawa. And the French government does not want to live, two months before the presidential elections, a pandemic version of the protests of the yellow vests that put the Elysee in check at the beginning of the mandate that Emmanuel Macron seeks to renew in April. Although the Executive tries to minimize the scope of this new citizen revolt, in a preventive way, the Police Prefecture of the French capital has announced this Thursday the prohibition of “freedom convoys”, the motorized movement that, inspired by the protest trucker against the mandatory vaccine that has been semi-paralyzed for days in the Canadian capital, is already advancing from all over the country towards Paris.

The objective of this citizen movement organized on social networks and messaging services such as Telegram, where its accounts have several thousand followers, is to protest this weekend in Paris against health restrictions and, especially, against the vaccination passport. Then they will continue to Brussels to celebrate a “European convergence” of demonstrators from other countries on Monday the 14th. From the Belgian capital, headquarters of the European institutions, they have also reacted preventively against the convoy. Local, regional and federal authorities have assured this Thursday that no demonstration has been authorized, since they have not yet received any formal request. But that, in any case, it has been decided to ban the caravan and measures have been taken to avoid blocking the community capital.

The Prefecture of Paris has put the first obstacle for them. From this Friday, the day scheduled for the arrival of the first motorized convoys that began on Wednesday from various points in France, a specific device will be installed to “prevent road blockades, sanctioning and arresting those who contravene this prohibition of demonstration”, states the official decree.

The justification for the measure, which will prevail from Friday, February 11 to Monday, February 14, is the “risk of disturbance of public order that this demonstration could cause.” According to the note from the prefecture, its “declared objective is to blockade the capital by hindering road traffic on the streets of Paris to promote its demands, before continuing its journey towards Brussels on Monday, February 14”.

Although beyond the rejection of the sanitary restrictions due to the coronavirus —not necessarily the vaccine itself— it is difficult to find many political coincidences in the participants in the “freedom convoys”, in France these days the echo of the protests of the yellow vests (also of diverse political affiliations, at least in its beginnings), which staged strong demonstrations from the end of 2018 and throughout much of 2019, weighing down and marking the agenda of the Macron government. Like these, the new protests also have as a background the rise in energy prices, a cause for widespread concern despite the government measures taken, an inflation check and the strong limitation of the increase in the electricity bill, among others.

According to the Franceinfo radio station, which claims to have been able to consult a note from the internal secret services issued on Monday, the territorial antennas of this organization are “carefully” following a movement with a strong “virtual success” that, despite still being “far from be structurally consolidated”, is capable of giving a “new impetus” to the “yellow vests”, but also to the followers of conspiracy theories and the protest movement against the covid certificate, today transformed into a vaccination passport.

“Boredom” with the restrictions

The government spokesman, Gabriel Attal, assured on Wednesday that the Executive is aware that there is “a weariness and fatigue of the French in the face of the virus and the measures that we have had to take since the beginning of the pandemic to protect” citizens. . But he warned against those “often radical political movements that have sought to capitalize on that weariness and fatigue to try to create a movement” of protest that goes beyond the French borders and that, according to The Parisien, Macron himself has asked to “follow closely”. In fact, the declared objective of most of the participants in the “freedom convoys” is Brussels.

The parade, which could embitter Valentine’s Day in the community capital, where it plans to arrive on February 14, is announced as a “peaceful action”, but in Brussels they already have a history of rallies promoted by groups opposed to anticovid measures that They ended up getting out of hand. A little over three weeks ago, some 50,000 people walked the streets and the European institutions to demand, among other things, the end of the covid passport and reflect their fear of compulsory vaccination.

The conveners were others, but with a very similar name: the organization Europeans United for Freedom, also paneuroepa, managed to attract demonstrators from several countries and raised attendance to unprecedented levels. In that human tide everything was mixed, from hippies to conspiracy theorists, going through ordinary people tired after two years of pandemic; It ended with riots, clashes with the police and several public buildings attacked, such as the headquarters of the European External Action Service, led by the Spanish Josep Borrell, head of European diplomacy. The president of the group Europeans United for Freedom, Tom Meert, has also given his approval to the call for the convoy. “It is really popular within our movement”, he has said, as collected Politician.

The organizers of the convoy to Brussels have not yet contacted the Belgian authorities to officially request the demonstration, as reported by Philippe Close, mayor of Brussels, but they have already reacted by announcing their ban. The police plan to deploy a security ring around the community capital to divert “motor vehicles that arrive in the capital despite the ban,” Close announced on social media. The mayor added in an interview in RTBF that it is “inadmissible” for the city to be paralyzed, with trucks and other vehicles, but it has been open to a typical demonstration, of which more than 1,000 are authorized per year.