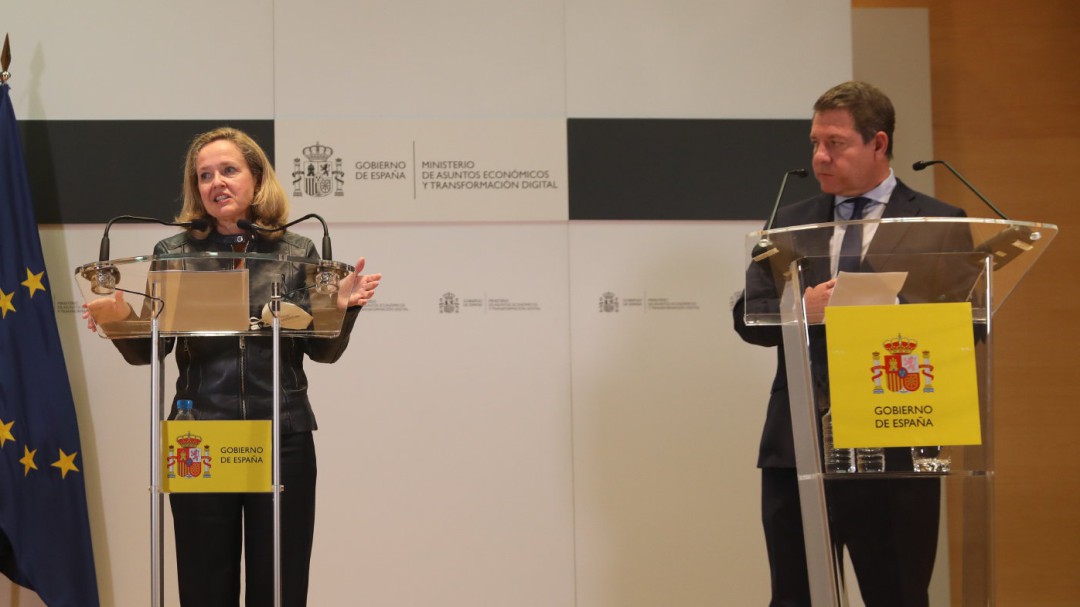 The president of Castilla-La Mancha, Emiliano García-Page, has considered that the controversy generated by the statements of the Minister of Consumption, Alberto Garzón, on intensive livestock farming, they are “an anecdote” that the minister can correct “if he wants to” and he has invited him to visit a meat company in the region to give him the opportunity to “get rid of the sanbenito.”

To questions from the media after holding a meeting in Madrid on Tuesday with the First Vice President of the Government of Spain and Minister of Economic Affairs and Digital Transformation, Nadia Calviño, García-Page he has insisted that his opinion is that Garzón “has been wrong in his assessment” and he has maintained that “when you screw up, what you have to do is get it out.”

“Which it is not worth inventing conspiracies of lobbys. This is what it is, as simple as that livestock in Spain works well and, if any company does not work well, let it be said, because if unnecessary damage is not done, “he continued, pointing out that he has” a good personal impression “of the minister but defending that” what cannot be discussed is the quality “, which is” extraordinary “.

Regarding your invitation for Garzón to visit one of the meat companies in Castilla-La Mancha, the regional president has indicated that “it is about giving him the opportunity to see the industry, which is immense and provides thousands of jobs “, ironically about what menu he would offer the minister in case of visiting the Autonomous Community:” Neither meat nor fish, pisto manchego. “

Likewise, he has also predicted that “the blood will not reach the river“In the relationship between PSOE and United We can for this reason, considering” normal “that there are different opinions.

He accuses the PP of overacting

On the other hand, Emiliano García-Page has stated that the PP “overreacts” on this issue, using as an example the regional president of the ‘popular’, Paco Núñez, who “approved when he was mayor of Almansa a motion that prohibited macro-farms.”

“The PP lives in contradiction in many respects“, he continued, although he has emphasized that what is relevant is that” responsible governments “try to order the sector. At this point, he has ensured that in Castilla-La Mancha they will” put all opinions on the same table “With the aim of reaching a consensus.” No big company is going to set our pace, but neither is any cheap populism, we are going to decide according to social interests, “he concluded.

This has been the meeting with Calviño

The First Vice President and Minister of Economic Affairs and Digital Transformation, Nadia Calviño, has highlighted some areas in which Castilla-La Mancha is “particularly well situated” to lead the deployment of investments in the Recovery Plan, such as those related to green hydrogen, aeronautics or the agri-food sector.

“Castilla la Mancha must play a leading role and carry out these investments and to be one of the emblematic regions for the deployment of these Recovery Plan projects, “said the vice president in statements to the media this Tuesday together with the president of the Junta de Castilla-La Mancha, Emiliano García-Page after the bilateral meeting that they have kept at the headquarters of the Ministry. At the meeting, Calviño and García-Page have confirmed the “dynamism” of economic recovery and job creation in Castilla-La Mancha, as well as the strength of the community’s business fabric.

The economic head of the Government has valued that throughout 2021 much progress has been made in the execution of the Recovery Plan, transferring more than 11,000 million so that the autonomous communities launch their own investment calls. In the case of Castilla-La Mancha, calls are being issued since the month of November, to which are added the different investment programs promoted by different ministries.

In addition, three Strategic Projects for Economic Recovery and Transformation (PERTES) have already been approved – electric and connected vehicle, cutting-edge health and green hydrogen – and three or four more are being prepared. Meanwhile, the Government has established a “very intense” dialogue with the autonomous communities to discuss how these emblematic projects that the regions have been identifying in their territories can fit into these strategic projects at the national level or in the rest of the calls.

Looking ahead to 2022 and thanks to the General State Budgets, Calviño has ensured that Spain will achieve cruising speed in the deployment of the Recovery Plan, with which the country has been the first to receive funds linked to the fulfillment of milestones and objectives. Specifically, there are 10,000 million that Spain already received last December, in addition to the advance of 9,000 million that arrived months before.

The vice president wanted to highlight the “enormous disposition and the great agility and efficiency” of Castilla-La Mancha, as well as the “vast majority” of autonomous communities, to try to mobilize the productive fabric of their territories and identify those areas in which they have a comparative advantage or in which they are better positioned to be able to lead and deploy investments.

“The Recovery Plan is a country plan. And the objective must be precisely to improve the territorial and social structure of Spain., achieving a strong, sustained and sustainable recovery throughout the territory “, remarked the vice president, after emphasizing the” excellent “relationship with” all “the presidents of the different communities.