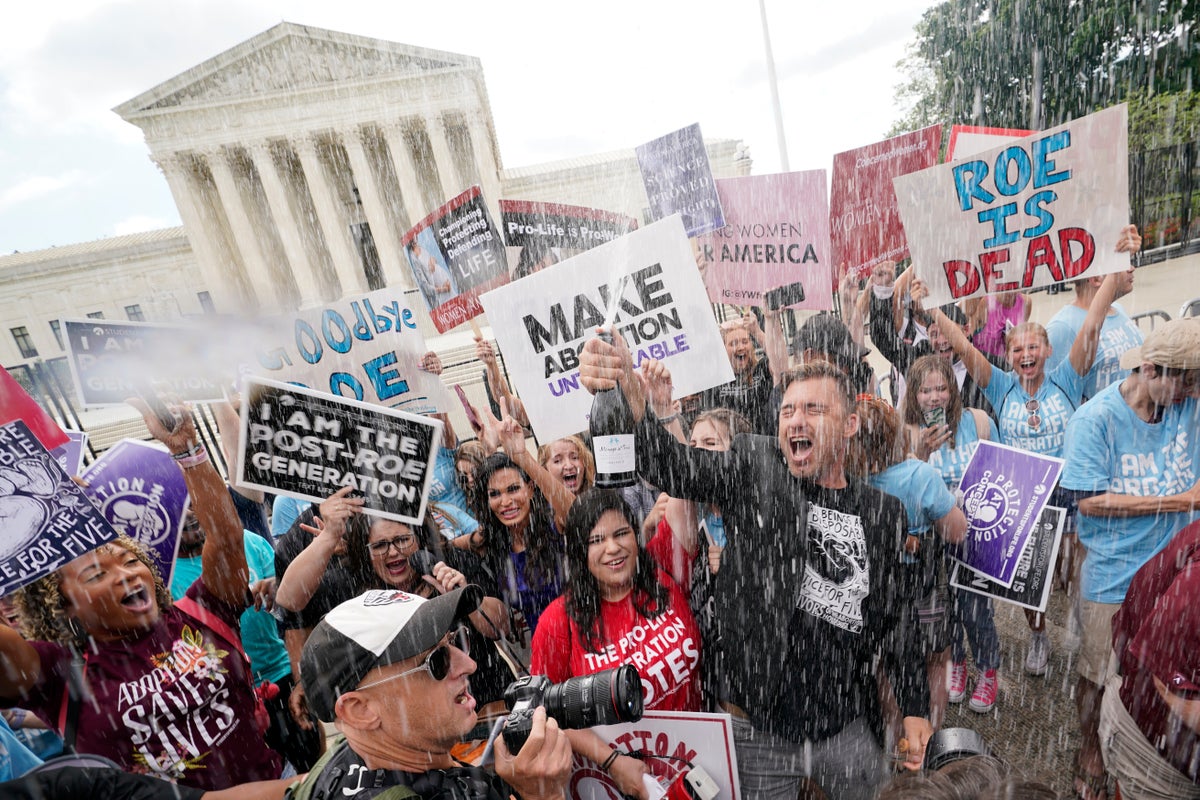 Boris Johnson has condemned a decision to scrap the constitutional right to abortion in the United States as a “big step backwards”.

The US Supreme Court has ended constitutional protections for abortion that have been in place for nearly 50 years by deciding to overturn the landmark Roe v Wade ruling.

It is expected to lead to abortion bans in roughly half of US states.

The Prime Minister told reporters at a press conference in Kigali, Rwanda, that the move was a “big step backwards”, adding: “I’ve always believed in a woman’s right to choose.”

More than 100 demonstrators gathered outside the United States embassy in London, many holding signs, some reading “our bodies, our choice”.

Pro-choice campaigners and MSPs also gathered outside the US consulate in Edinburgh.

UK politicians from across the spectrum spoke out against the decision, including the SNP’s Nicola Sturgeon, who said it will embolden anti-abortion and anti-women forces in other countries too.

“The right of women to make their own decisions about their own bodies is a fundamental human right.”

Former leader Jeremy Corbyn also called it “devastating”, and co-leader of the Green Party, Caroline Lucas, said it is a “truly barbaric ruling, and heartbreaking news for women everywhere”.

Some UK groups have been quick to hit out at the ruling, with the British Pregnancy Advisory Service (Bpas), the UK’s leading abortion provider, saying it is “appalled”.

“It simply makes it more difficult and more dangerous.

“We are calling on the UK Government to publicly condemn this assault on women’s human rights, and make clear on the international stage that removing women’s access to swift, safe abortion services has absolutely no place in any society that calls itself civilized in the 21st century .

“For our politicians to watch silently as women’s rights are rolled back would be unforgiveable. We urge the Government to show leadership as a matter of urgency.”

The charity Christian Action Research and Education (Care) welcomed the decision, saying “the most compassionate societies esteem and protect” both mothers and babies.

“This is what a true pro-life ethic looks like.”

Spokeswoman for the Right To Life UK group, Catherine Robinson, said the ruling overturns “an unjust law” and is the “beginning of the legislative battle over abortion, certainly not the end”.

Nimco Ali, the Government’s independent adviser on tackling violence against women and girls, called the decision “an assault on women’s human rights, their lives and their families”.

She tweeted: “The UK Government and other #G7 cannot remain silent as women’s human rights are breached.”

The Women’s Equality Party tweeted: “Make no mistake. Women will die because of this ruling, and tens of thousands more will be criminalized or forced to continue with pregnancies they did not choose.

“It is barbaric, inhumane and utterly heartbreaking. Solidarity with our sisters.”

The party and the campaign group Abortion Rights were calling for people to join them in protest at the decision outside the US embassy in Vauxhall, south London, on Friday evening.

Judith Orr, vice chairwoman of the group, said protesters were “full of rage and anger” about the decision and warned the consequences would be “dire”.

Mayor of London Sadiq Khan posted on Twitter: “London stands with the women of America whose most basic rights and freedoms are threatened by this ruling.

“A dark day for a great country.”

Rabbi Jonathan Romain said: “America should get ready for unwanted children, back-street abortions, suicides. Abortion should not be treated lightly, and adoption is another option, but complete strangers should not take away a woman’s control over her own body.

“Her right to choose is a sacred right.”