Eight episodes are just not enough to capture the scope of a TV show like Outlander needs for a thrilling season – there we said it.

If Amazon’s recent experiments with eight-episode seasons have taught us anything, it’s that it causes huge pacing problems for complex stories such as their recent Wheel of Time adaptation, there is simply not enough time to bed in and explore different plots.

Though the Starz writers, crew and cast have done everything in their power to combat the problems caused by the pandemic and star Caitriona Balfe’s pregnancy, it’s beginning to feel the climax to this season has been strangely rushed.

Main plot points have been glazed over, while other important ones have taken a back seat and overall, it’s felt like we are missing out on the texture and richness we usually get from a normal-sized season.

The plot around Malva Christie’s death was worthy of at least another episode, in our opinion, and though we’ve been robbed of that luxury it has felt like others took precedent when they could have been shortened (such as the Indian Agent storyline).

This penultimate episode really hit that point home, the Lizzie and the Beardsley Twins storyline felt like it came from nowhere (and that’s the third pregnancy based plotline this season), while the aftermath of both the bloody pox and the Malva murder really needed more time to breathe.

Thankfully though, the cast and costume and set designers have really shone once again this season, reminding us why people really love this show so much.

Caitriona Balfe’s exploration of Claire’s PTSD has been wonderfully acted and portrayed, while Sam Heughan has really nailed the husband and community leader pushed to his breaking point.

The worries about the coming war, and fears over his relationship with his wife and his family are all shown in one of Jamie’s trademark stern looks.

While newcomers the Christies (take a bow Alexander, Jessica and Mark) have been brilliant at ramping up the tension, though again they probably served a few more episodes to continue to shine.

And it’s not just the new antagonists who are making their presence felt, Ned Dennehy’s Lionel Brown is a lingering specter that is being used to show Claire’s fragile state and was a nice touch to explore how her ordeal at his hands affected her.

Roger Mac is also stepping up this season (thankfully for fan favorite Richard Rankin) and it’s been another episode where we have gotten closer to him and watched as his relationship with Bree continues to blossom.

The real draw of this episode though was the ending cliffhanger and Richard Brown (Chris Larkin) arriving to arrest Claire for the murder of Malva.

The unbridled threat of violence emanating from a bristling but outwardly calm Jamie (bravo again Sam with the look of a man who is ready to watch the world burn to save his wife) will definitely have us looking forward to the final episode.

Pacing problems or not.

Don’t miss the top culture and heritage stories from around Scotland. Sign up to our twice weekly Scotland Now newsletter here. 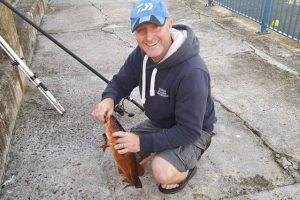