Skip to content
Home News Oscars diary: A yak in the classroom, a family in Hollywood 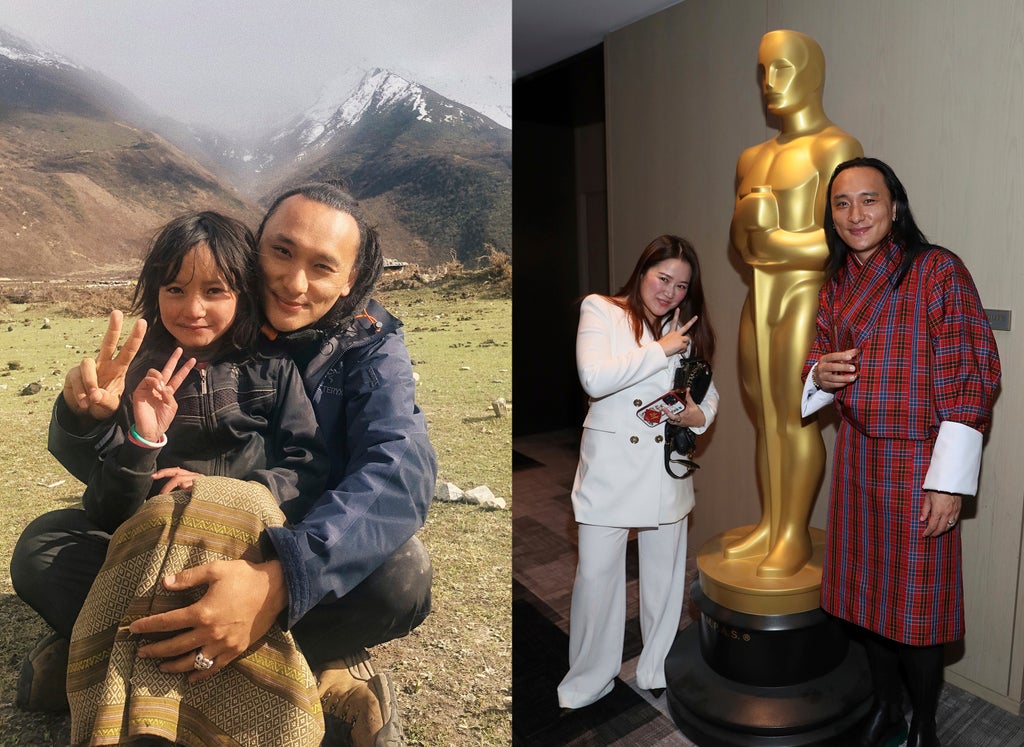 “Lunana: A Yak in the Classroom,” became the unlikeliest of Oscar contenders when it was nominated this year for best international film. The story of a young man in Bhutan who goes on an unexpected and life-changing journey to become a teacher in the nation’s remote mountains is the first feature from director Pawo Choyning Dorji and the first film in the history of the small Himalayan country to be nominated.

Dorji and his wife, Taiwanese actor and producer Stephanie Lai, arrived in Los Angeles a few weeks before Sunday’s Academy Awards along with their 12-year-old daughter and 9-year-old son.

He shared some of their experiences with The Associated Press in this first-person account.

As I worked over the past two years on “Lunana, A Yak in the Classroom,” my kids were subjected to a lot of talk about it. My son could not understand what the big fuss was about, and he asked me why I worked so hard to make such a “boring and slow” film, that had a “yak who does nothing but just sit there.” He would often say, “Dad, can you next time maybe try and make films that are enjoyable to watch, like ”Spider-Man?”

When the film was announced as Bhutan’s first ever Oscar nominee, me and my wife jumped and screamed in joy. Our two children, who had never seen their parents that ecstatic, asked what the Oscars were. I told them that we had just been recognized as one of the five best international films in the world, and that we would have to go to Hollywood.

They asked us who else would attend the Oscars, and I told them, “Everyone!” My son replied, “Even Spider-Man?” I said, “Yes, of course! Even Spider-Man will be there!” They started jumping and asked me if I could have met Andrew Garfield, their favorite Spider-Man. I did not know that Andrew was nominated for an Oscar for “tick, tick…BOOM!” and frankly I thought meeting him in Hollywood would not be possible, but I nonetheless said “Yes, yes, I promise you will meet Andrew Garfield!” as I did not want to disappoint them. The children jumped in joy and were finally excited about the “boring yak.”

My children told many of their friends that they were going to Hollywood to meet Andrew Garfield. I was very worried about disappointing them and even warned my wife, “Don’t tell the kids, but someone like Andrew Garfield would not have time to meet us.”

After arriving in California, me and my wife attended the nominees luncheon at the Fairmont Century Plaza hotel on March 7. It was such a surreal moment as we sat in the same room as Steven Spielberg, Denzel Washington, Benedict Cumberbatch, Jessica Chastain, and yes Andrew Garfield!

Me and my wife sneaked over to him. As I introduced myself, he grabbed my hand and said, “Oh I visited Bhutan, and I loved it so much! I was so happy when I saw that there was a Bhutanese film that was nominated.” Me and my wife then shared with Andrew how our children, who were not with us at that moment, wanted to meet him and he graciously agreed.

My wife quickly went to get the children at the luncheon’s drop off point. Andrew was so kind, he came over and spoke to the kids as though they were old friends, even giving my son high fives. My children claimed that meeting Andrew Garfield was the “best moment in their lives!”

That night once we got back to hotel room, we told our son to wash up before going to bed. He looked down at his little hands and said “but Andrew Garfield high fived me, if I wash up, I’ll lose his energy from him.”

AN UNEXPECTED BIT OF BHUTAN

When “Lunana” defied most predictions and was first put on the shortlist then nominated for best international feature film, I received congratulations and good wishes from Bhutanese the world over, from yak herders in the real village of Lunana, to monks from the most remote monasteries, to children in the city. While other films had financial support from their governments, this is what “Lunana” had, the genuine hopes, prayers, and aspirations of an entire nation.

But I did not expect we would find part of that nation, and those hopes and prayers, on our trip.

When we were not busy with the film’s Oscar campaign, we would make day trips to take the children to visit the popular spots of Los Angeles. My wife was the designated driver while I was the chief navigator with the GPS. While returning from one trip, I missed an exit on the freeway and we ended up losing our way.

While getting an earful from my wife and trying to navigate the Santa Monica rush hour, I suddenly saw the orange and yellow colors of the Bhutan flag! As we drove closer in total astonishment, we saw a sign that said, “Bhutan Shop.” My wife said, “Oh you must visit that shop!” We stopped the car and I quickly rushed inside.

The store sold Bhutanese handicrafts. There was a teenage boy behind the counter, and even though I was still wearing my medical mask, he looked up and said, “Oh, it’s you! You are the yak director, aren’t you? The family-run shop belonged to a man named Dorji — no relation to me — who was the first Bhutanese to migrate to Los Angeles in the early 1970s. The teenager, his 18-year-old son Ugyen — no relation to the protagonist of my film with the same name — was born here in LA and hadn’t yet visited Bhutan. Ugyen seemed so American, yet he seemed to have so much pride in how a film from his parents’ distant homeland had become an Oscar nominee. “I have been following you on IG since 2016,” he said, “and I know of all your work.”

I did not know of any Bhutanese in LA, so I was surprised when Dorji shared with me that there were only around 50 Bhutanese in the whole greater Los Angeles area. He said they were all planning on attending a screening of the film in Santa Monica, where I was conducting a Q&A session. “There is so much pride in the film, all the Bhutanese said they are going to attend the screening in their national dresses,” Dorji said.

See also  My husband and I don't wear wedding rings am I really giving him 'permission to cheat'?

“There’s only a handful of us here but we try our best to have small gatherings to keep ourselves connected to our culture and way of life,” he said. “Many of our youths, who have been born here, refuse to go for these gatherings, they find it boring and cumbersome. But, when it’s for ‘Lunana’ they are all excited.”

Dorji, Ugyen and I took a photo in front of Bhutan Shop, which was quickly shared on the LA Bhutanese community’s group chat. As the photo made its rounds, the next day I was invited for a Bhutanese meal by the second Bhutanese to have settled in the LA area, a man who introduced himself to me as “Ashang,’ which means ”Uncle” in our language.

The delicious home cooked meal of Ashang’s wife, who everyone called “Aunty,” made me miss my family and home so dearly. I asked them how they got the authentic fermented cheese and chilis our cuisine is known for. Ashang laughed and said, “ Oh I ask my family in Bhutan to send us fermented cheese every month by post.”

On the day of the screening, we were invited back to the Bhutan Shop, where all the Bhutanese of LA had gathered for a lunch of saffron rice and butter tea, something that is usually prepared in Bhutan only to celebrate the most auspicious of occasions. Most of the Bhutanese had dressed up in their Sunday best national dress to celebrate.

I was so far from home, but I had never felt so close to home.