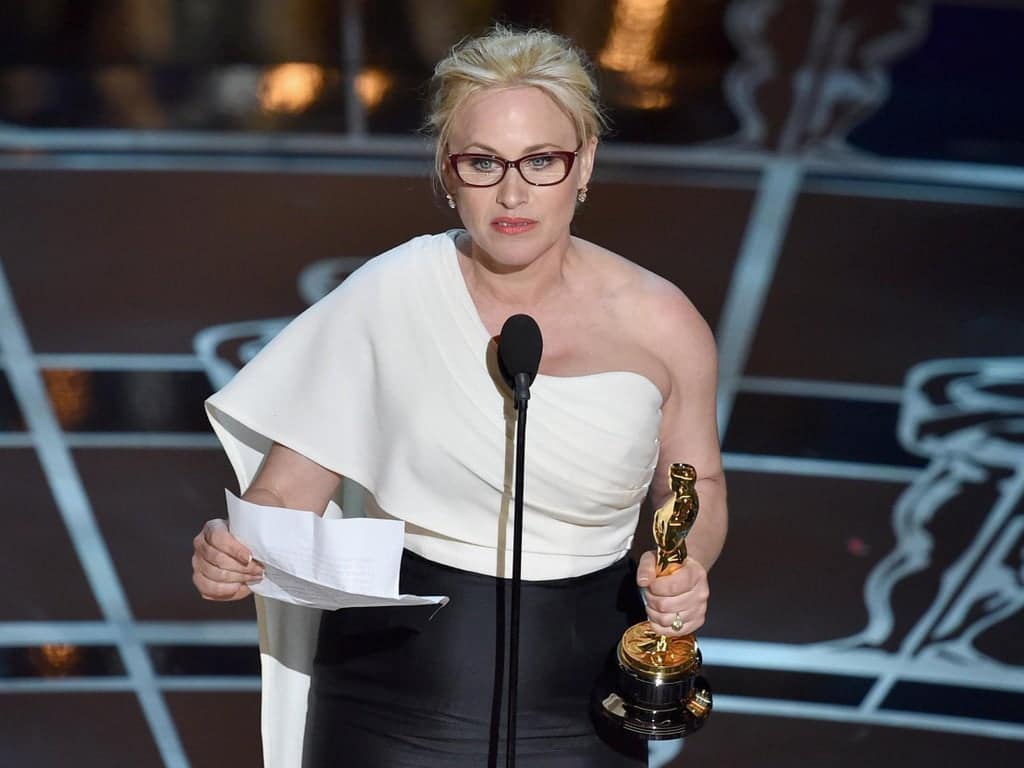 ANDEntertainment awards shows have become renowned for highlighting political and social change as of late, with winners using their time on stage to raise awareness of important issues such as greater representation in film and gender equality.

The impact of Time’s Up was honored at the 2018 Oscars, as numerous attendees wore special pins and badges to show support for the anti-sexual harassment and abuse movement.

Several significant feminist moments also occurred at the 2019 Golden Globes, including empowering speeches given by actors Glenn Close and Regina King on the subjects of women finding personal fulfillment and gender equality in film.

From Patricia Arquette to Sandra Bullock, here are eight of the best feminist speeches to have been delivered at the Oscars.

When Frances McDormand won the Best Actress Oscar in 2018 for her role in Three Billboards Outside Ebbing, Missourithe actor used her moment on stage to champion all women working in the film industry.

After expressing her gratitude towards writer and director Martin McDonagh, her sister Dorothy McDormand, her husband Joel Coen and their son Pedro McDormand Coen, McDormand then called for every female Academy Award nominee in the room to rise to their feet.

“And now I want to get some perspective. If I may be so honored to have all the female nominees in every category stand with me in this room tonight, the actors – Meryl, if you do it, everybody else will, c’mon – the filmmakers, the producers, the directors, the writers, the cinematographer, the composers, the songwriters, the designers. C’mon!” she said.

“Okay, look around everybody. Look around, ladies and gentlemen, because we all have stories to tell and projects we need financed.”

McDormand ended her speech by urging for greater representation in Hollywood by using the term “inclusion rider”, which is when a cast and crew is contractually required to hire a diverse workforce.

Patricia Arquette’s Best Supporting Actress win at the 2015 Academy Awards for her role in boyhood was a long time coming, having filmed the coming-of-age drama over 12 years.

After thanking all the individuals involved in the film’s production in her speech, Arquette then proceeded to passionately discuss the need for equal pay in America.

“To every woman who gave birth, to every taxpayer and citizen of this nation, we have fought for everyone else’s equal rights,” the actor said.

“It’s our time to have wage equality once and for all, and equal rights for women in the United States of America.”

One of the most memorable Oscars moments of all time came in the form of Halle Berry’s 2002 acceptance speech, which she delivered after being awarded Best Actress for her performance in Monster’s Ball.

The enormity of the occasion wasn’t lost on Berry, whose sheer astonishment was apparent the second her name was read aloud by Russell Crowe.

As of 2018, Berry remains the only woman of African-American descent to have won the accolade.

The actor dedicated her award to all women of color who may follow in her footsteps by making history.

“It’s for the women that stand beside me, Jada Pinkett, Angela Bassett, Vivica Fox. And it’s for every nameless, faceless woman of color that now has a chance because this door tonight has been opened. Thank you. I’m honored. I’m so honoured.”

As Cate Blanchett stood on stage in 2014 to receive her Best Actress Oscar for her role in blue jasmineshe acknowledged the power that female-led films can have on cinemagoers.

After thanking the audiences who went to see the film, which depicts Blanchett as a Manhattan socialite going through financial difficulties, the actor expressed her appreciation for “those of us in the industry who are still foolishly clinging to the idea that female films with women at the center are niche experiences. They are not.”

“Audiences want to see them and, in fact, they earn money,” she added, to resounding cheers from the star-studded audience. “The world is round, people.”

Last year marked a decade since the release of 2009 biographical drama The Blindside.

The following year, Sandra Bullock won the Best Actress Oscar for her portrayal of Leigh Anne Tuohy in the film, a woman who adopted a boy living in poverty and supported him as he embarked on a career in American football.

Bullock used her time on stage to express her appreciation for all mothers who care for children and young people regardless of their background, including Tuohy, who was sitting in the audience.

“I would like to thank what this film is about for me which are the mums that take care of the babies and the children no matter where they come from,” the actor said.

“Those mums and parents never get thanked.”

Bullock went on to also thank her own mother, Helga Mathilde Meyer, who passed away in 2000.

The 1995 film adaptation of Jane Austen’s novel 1811 Sense and Sensitivity depicts several antiquated gender norms associated with women, such as the need to rely on men for economic stability.

Emma Thompson emphasized this fact in her acceptance speech for Best Adapted Screenplay, as she expressed her gratitude towards the film’s executive producer Sydney Pollack.

“[Thank you] to Sydney Pollack for asking all the right questions, like, ‘Why couldn’t these women go out and get a job?’ Why indeed’,” Thompson said, to the amusement of the audience.

Thompson also won the 1996 Academy Award for Best Actress in the film, becoming the first person to win an Oscar for both acting and writing.

In 1977, Lina Wertmüller became the first woman to be nominated for the Academy Award for Best Director for Italian drama. Seven Beauties.

However, it would be another 33 years until a female director walked away with the accolade.

In 2010, Kathryn Bigelow became the fourth woman to be nominated in the prestigious category and the first to come out on top, beating fellow nominees James Cameron, to whom she was previously married; Lee Daniels; Jason Reitman and Quentin Tarantino.

Before announcing the winner, presenter Streisand stressed the significance of the occasion.

As the singer opened the envelope and peered at the winner’s name, she paused dramatically, before saying: “Well the time has come,” a statement that prompted Bigelow to smile in nervous anticipation.

During her acceptance speech, Bigelow described her win as “the moment of a lifetime” before going on to dedicate her award to those serving in the military.

The film for which Bigelow won, war film The Hurt Lockerwas nominated for nine Oscars in total and won six, including Best Picture, Best Original Screenplay and Best Film Editing.

Salma Hayek, Ashley Judd and Annabella Sciorra praise MeToo and Time’s Up movements at the 2018 Oscars

During the 90th Academy Awards in 2018, the #MeToo and Time’s Up movements were at the forefront of the conversation.

Earlier that year, attendees at the Golden Globe Awards had followed a black dress code in solidarity with victims of sexual harassment and assault, an initiative led by the newly formed Time’s Up movement.

At the Oscars, actors Ashley Judd, Salma Hayek and Annabella Sciorra took to the stage to present a special presentation shining a spotlight on the Time’s Up movement and the importance of diversity in the film industry.

Judd said: “The changes we are witnessing are being driven by the powerful sound of new voices, of different voices, of our voices, joining together in a mighty chorus that is finally saying, ‘Time’s up’.”

Hayek then praised the “unstoppable spirits who kicked ass and broke through the biased perceptions against their gender, their race, and ethnicity to tell their stories.”

The trio’s speech received rapturous applause from the star-studded audience in the Dolby Theater in California, US.