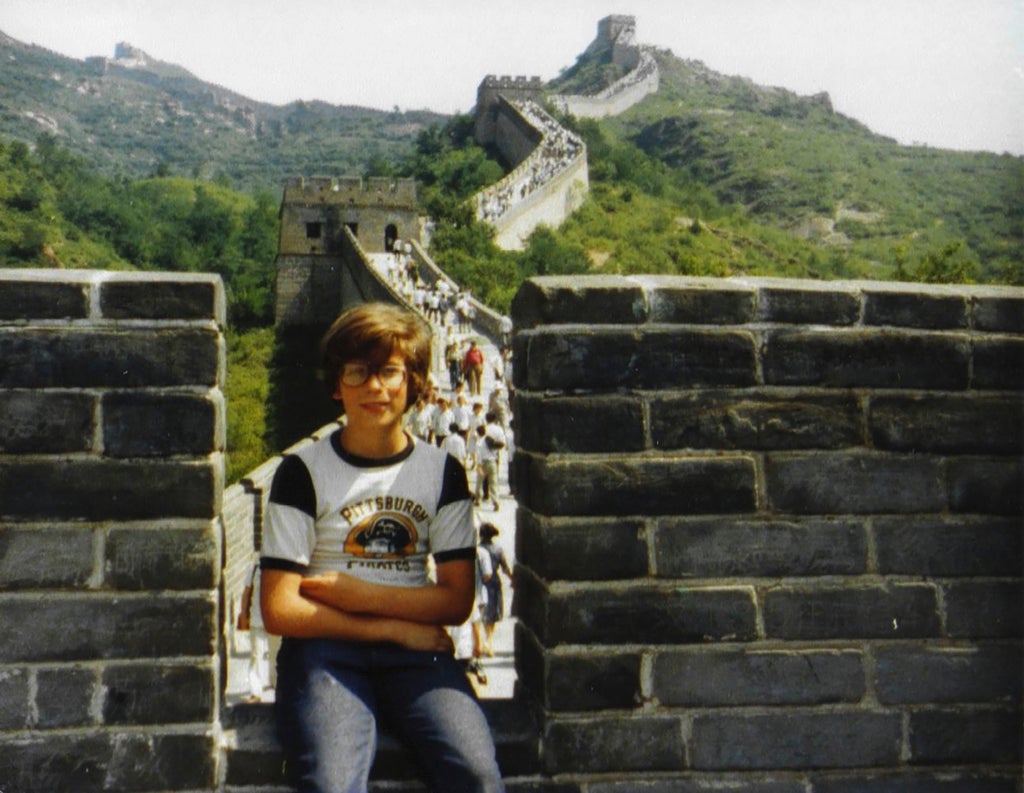 Each afternoon, just after the midday rest break, we’d gather in the music room of Fangcaodi Elementary School. The teacher would hand out a song sheet, mimeographed on pulp paper. We’d stand, ramrod straight, and sing Chinese songs with stirring tunes and — no other way to put it — lyrics of Communist propaganda.

“We are all crack shots. Every bullet annihilates one enemy.”

“We are thankful to dear Chairman Mao for building our beautiful school.”

It was the fall of 1979, and I was 11. Three months earlier, I had been sitting in Three Rivers Stadium in Pittsburgh, watching the Pirates start a run that would end in a World Series win I would miss. I was a suburban kid who just wanted to hang out with my friends.

Suddenly I found myself in the belly of what was still, back home, being called “Red China.” Though I didn’t realize the momentousness of it at first, we were one of the earliest American families to move to China in the months after it and the United States normalized relations.

For this, I had Richard Nixon to thank.

Nixon visited Mao Zedong in Beijing 50 years ago this week, when they both led their respective nations. Nixon called it “the week that changed the world.” Seven years later, on Jan. 1, 1979, that meeting echoed into irrevocable history when their successors, President Jimmy Carter and then-Vice Premier Deng Xiaoping, officially established diplomatic relations.

Deng was not China’s “paramount leader” yet. But his new project by him — launching something called “reform and opening-up” that would help infuse capitalism into the communist system — was part of why I ended up in China at age 11.

When China opened to Americans, young people hurried there to teach English. But other than being native speakers, few had language-teaching qualifications. So to teach its teachers to teach English after years of isolation, the Chinese Education Ministry recruited language teachers like my parents, linguists at the University of Pittsburgh.

And so it was that in mid-July 1979 we joined the earliest wave of American families to move to China. My parents were dubbed “foreign experts” and were named to one-year posts at the Beijing Foreign Languages ​​Institute No. 1.

We were installed in the Friendship Hotel, a sprawling compound in then-bucolic northwest Beijing that had been built in the 1950s to house Soviet advisers. It was a miniature city, complete with barbers, a butcher, a movie theater and a huge swimming pool with a 10-meter diving platform. We had the run of most of the place.

One day, in the compound’s “international club,” where my parents drank Wuxing Beer with their friends, a rumor spread. Chinese television was going to broadcast its first American show, and the club was the only public place in the compound with a TV set.

The next week we all gathered around a tiny screen. The credits rolled. It was “The Man From Atlantis,” a forgettable sci-fi show starring Patrick Duffy, later of “Dallas.” It’s hard to convey today, in our on-demand world, how thrilled we handful of American kids were at the rare connection to home.

Most Chinese people we encountered — from my teachers at Fangcaodi to my parents’ colleagues to random workers I befriended after learning to speak their language — were fascinated by America and knew little of its citizens. They loved hearing about baseball, about McDonald’s (which would arrive 12 years later) and about something that astonished everyone in this culture of bicycles: Most Americans had their own cars.

Not everyone was captivated by the United States, though — or, at least, by its leadership. After all, China had just lived through the traumatic Cultural Revolution and had been conditioned to view Americans as bourgeois capitalist “running dogs.”

Across Beijing then were red billboards documenting various iterations of “Mao Zhuxi sixiang” — “Chairman Mao thought.” We were with a Chinese colleague of my parents and passed such a sign being erected. It was bright red and still blank.

The colleague pointed to it, looked at my parents and quipped: “Jimmy Carter thought.”

For me today, China in 1979 seems like a distant movie montage that plays in my head.

I picture old men on street corners selling roasted sunflower seeds out of burlap sacks — snacks that tasted vaguely like the burning coal whose scent filled the winter air. I picture young women selling penny popsicles from icebox pushcarts. I picture my school, where kids from divergent cultures — Burma, Bangladesh, Uganda, Rhodesia, even North Korea — were being taught music and math and art in Chinese and could interact and play only if we learned the language. We did, and fast.

I picture our epic, tightly supervised railroad trip across China in February 1980 — all the way from Beijing to Sichuan, out west, before we boarded a boat back east down the Yangtze River. We encountered town after town of people who’d never seen Westerners before—much less Westerners who spoke Beijing-accented Chinese.

They’d gather around us in droves, watching and smiling, always willing to engage and—when they learned we shared a language—tell us about themselves. They’d pepper me with questions, usually about the little instamatic camera I was carrying. If I got a Chinese tone wrong, they’d instantly correct me; I may have been a foreigner, but I was still a child, after all. I learned as much from those conversations as I did from my classes back in Beijing.

Those images have been overwritten in my mind by images of a new China—a modern China, a fast-moving China, an intricate global presence that touches most every corner of human existence.

So many years later, this is what I want to tell you about living in China at that more-pivotal-than-we-realized moment in history: For me, it shaped what being an American meant.

Before humans could access the world on the phones in our pockets, it was rare to see your country both from the inside looking out and from the outside looking in — particularly from the vantage point of a culture so eager to engage. That perspective, given to me as a child by so many Chinese people both remembered and forgotten, is something I carry with me.

My travels through China that year, and the people I met, also gave me insight into how to listen. The men and women who wanted to know about my American life also told me about their Chinese lives. And though I knew I was passing through and living a life of drastically different circumstances, the language I suddenly shared with them made me realize they were not merely people to see, but people to hear — and, by extension, to work to understand. Which is what brought me back to China years later.

On Sunday, 43 years after moving to Beijing as a child and two decades after living here as a journalist, I covered the closing ceremony of the Winter Olympics. For two weeks, I’d been moving around the COVID “bubble” with the places I loved just out of reach. I had dinner a block from my old school but could not take my colleagues to see it. I smelled Beijing’s winter air and caught no whiff of coal. I was sad, but I was OK with it, too. That China is gone, and the complex nation that has replaced it is just as exciting, if not more so.

I still have the pulp pages of those long-ago songs that tried to indoctrinate me. They remind me of something my mother told me long ago: As important is it is to learn about a culture and respect its customs when you live there, you must leave something valuable behind, too. That way, people contemplating the question “What is an American like?” might use you as the example — for the right reason. China became my providing ground for that.

And all that, oddly, is why I — and, I’d wager, other American kids I knew here so long ago — owe an unlikely debt of gratitude to Richard Nixon, who 50 years ago this week helped open the door.

Ted Anthony, director of new storytelling and newsroom innovation for The Associated Press, is the AP’s former director of Asia-Pacific news. He lived in Beijing as a child in 1979-80 and as a journalist from 2001-2004. Follow him on Twitter at http://twitter.com/anthonyted