Skip to content
Home News On voting rights, Biden’s power to act on his own is limited 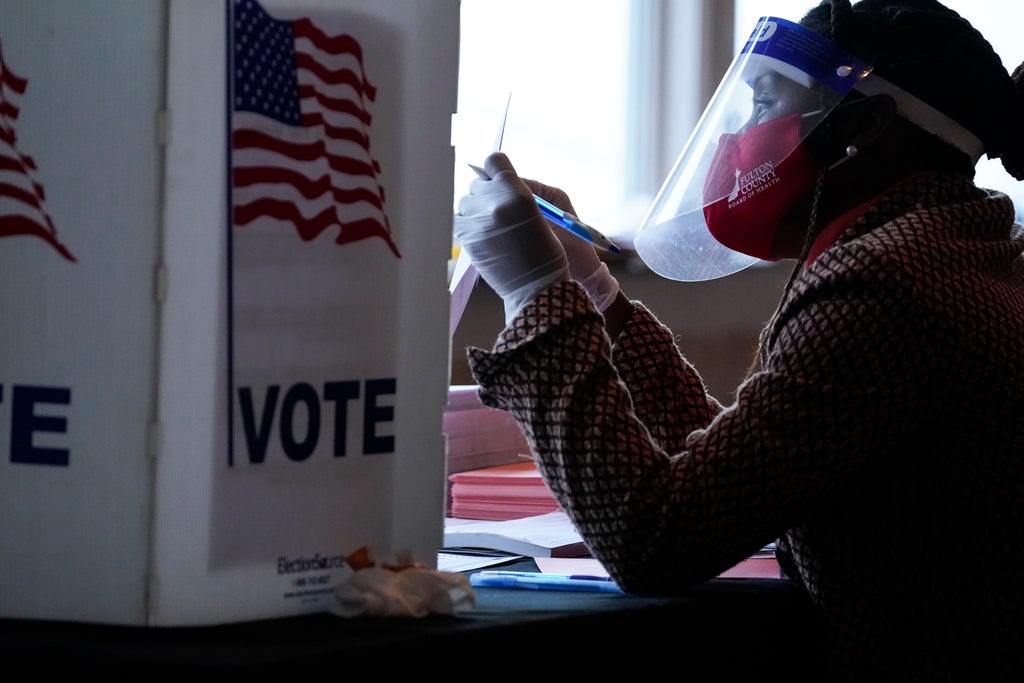 Unlike on other issues such as immigration or environmental protection, the White House has little leverage without congressional action as the November elections creep up.

“If there were some sort of easily available presidential power on this, others would have done it,” said Nicholas Stephanopoulos, a Harvard Law School professor who researches election law. “There is no significant unilateral authority here.”

Nine months before elections that will determine control of Congress voting rights advocates are worried there’s not enough time to fend off state laws and policies that make it harder to vote. They view the changes as a subtler form of past ballot restrictions such as literacy tests and poll taxes that were used to disenfranchise Black voters, a vital Democratic constituency.

Biden did issue an executive order last March that expanded access to voter registration and election information. The order is designed to make it easier for people in federal custody to register to vote, improve tracking of military ballots and provide better access for Americans with disabilities.

But to do more than that, Biden would have to rely on obscure and controversial constitutional provisions that probably could not take effect in time anyway, Stephanopoulos said. And the farther Biden were to go to push the issue of voting rights, the more he could face criticism for overstepping his authority.

“It’s very hard for a president to weigh in,” said Douglas Brinkley, a presidential historian at Rice University. “Everything is being done at a state-by-state level.”

So while Biden may be able to take some small actions around the edges, Brinkley said, “if he tries something extraordinary, it will be tied up in the courts for years.”

Americans have grown accustomed to seeing presidents act unilaterally when they hit roadblocks in Congress. President Barack Obama resorted to a wave of executive actions branded as “we can’t wait.” He flexed his authority from him to increase environmental regulations and shield from deportation young immigrants who were brought to the country illegally.

Marc Morial, leader of the National Urban League, was skeptical that executive actions — which could be reversed by a future president as quickly as they were imposed by a predecessor — could be sufficient anyway.

“An executive order or an executive action is not a replacement or a substitute or even a credible alternative to legislation to protect voting rights and democracy,” he said.

But so far, legislation has not been a workable option for Democrats.

Democrats have written voting legislation that would usher in the biggest overhaul of US elections in a generation by striking down hurdles to voting enacted in the name of election security. The plan would create national election standards that would trump state-level laws and restore the ability of the Justice Department to police election laws in states with a history of discrimination.

Republicans said the proposed changes were not aimed at fairness but at giving Democrats an advantage in elections. And Democrats were unsuccessful at changing Senate rules to allow the slim Democratic majority in the chamber to pass the laws on their own.

Republicans last year pushed through 33 laws creating new voting limits in 19 states, and five other states have bills that seek to restrict voting. The effort is motivated in part by a growing and widespread denial of President Donald Trump’s 2020 election loss.

Republicans who have fallen in line behind Trump’s election lies are separately promoting efforts to influence future elections by installing sympathetic leaders in local election posts and by backing for elective office some of those who participated in the Jan. 6, 2021, insurrection at the US Capitol .

Democrats and voting rights advocates are looking to the Justice Department as their best chance to ensure elections are free and fair. But there’s a political divide over what “free and fair” means in a country where millions believe false claims that the 2020 election was stolen.

The department has lawyers dedicated to enforcing civil voting statues, and Attorney General Merrick Garland has made it a priority.

But the department is limited in what it can do, following a 2013 Supreme Court decision that dismantled part of the civil rights-era Voting Rights Act, which required states with a history of discrimination to obtain approval for changes to election laws.

Separately, the Justice Department also has a role in ensuring fair elections but that, too, has been complicated by politics in recent years.

There has been increasing skittishness among election administrators over the department’s role after then-Attorney General William Barr told prosecutors to investigate election fraud claims before the 2020 election was certified. Barr cited concern over potential widespread voter fraud because of an increase in mail ballots during the pandemic, but he later declared there had been no widespread fraud.

Garland’s Justice Department has sued Georgia over the state’s new election law, alleging Republican state lawmakers rushed through a sweeping overhaul with an attempt to deny Black voters equal access to the ballot. The Justice Department has also brought a suit against Texas over its newly drawn congressional districts.

But the Supreme Court this past week signaled a willingness to side with the GOP on such issues.

The high court put on hold a lower court ruling that Alabama must draw new congressional districts before the 2022 elections to increase Black voting power. The court’s action means the upcoming elections will be conducted under a map drawn by Alabama’s Republican-controlled Legislature that contains one majority-Black district in a state in which more than one-quarter of the population is Black.

The three-judge lower court, which includes two judges appointed by Trump, had ruled that the state had probably violated the federal Voting Rights Act by diluting the political power of Black voters.

NAACP President Derrick Johnson said the Supreme Court has undercut the ability of the federal government to protect voting rights, and he still believes the best chance for long-term change is to get legislation through Congress.

“The Justice Department is doing as much as they can with one hand tied behind their back,” he said. He noted the Voting Rights Act only became law after previous attempts failed.

“We don’t stop because the first attempt didn’t work.”