Skip to content
Home News On the green run: Inside the eco-focused ski resorts of Switzerland’s Jungfrau region 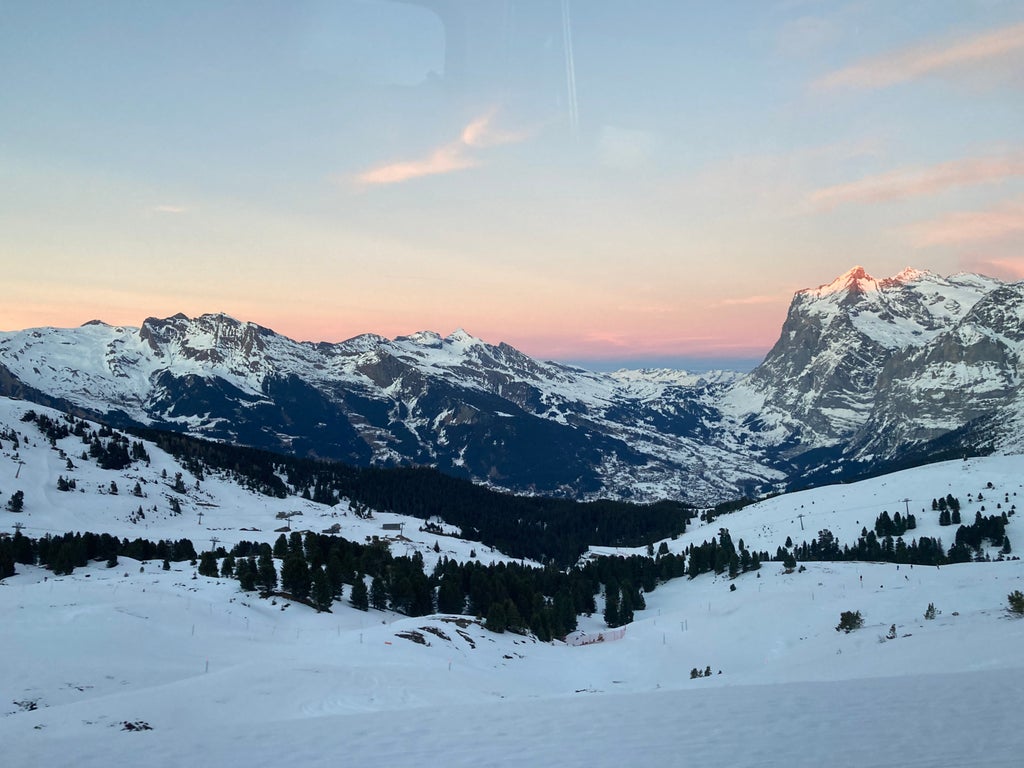 TOs morning commutes go, this one wins. As I glide noiselessly above a Christmas card scene of spruce forest, log chalets and a smooth blanket of fresh snow, Eiger feels close enough to slam into should the wind suddenly change. The first sun is creeping down its North Face. Though a shade off the magic 4,000m mark at 3,967m, this Swiss mountain is a beast: feared and revered for its vertical wall of rock and ice that has broken many a rock climber’s rope and soul.

That you can reach the mountain at all is a wonder. That you can now whizz up there on a tri-cable gondola in just 15 minutes from Grindelwald is a stroke of Swiss genius. When the Eiger Express opened in December 2020, it carved 47 minutes off the journey to Europe’s highest railway station, 3,463m Jungfraujoch, and set a precedent for eco-friendly mountain transport. The Eiger Express uses its wheels to generate green power and has its own heat recovery system. The landscape is pristine and the aim is to keep it that way.

“When overseeing the construction of the cableway, I looked at how we could minimize impact and enhance habitat,” says environmental supervisor and agronomist, Martin Lutz. The idea was for the gondola to slot into the landscape unobtrusively, so Martin’s job has been to protect the surrounding environment, which has involved everything from creating ponds to prevent erosion and attract species like midwife toads, to recultivating soil, making forest clearings more natural , collecting seeds, rewilding meadows and planting sycamore trees.

At Eiger Glacier, where the gondola ends and a little red train takes over, I pause to peer out across a glacier spilling down the mountainside like crushed meringue before boarding the Jungfraubahn. Trundling up to Jungfraujoch since 1912 and celebrating its 110th anniversary this year, the railway has always been crazily ahead of the game – not only in terms of its engineering but also its energy. It was powered by hydroelectricity right from the outlet.

At the top, it is quieter than usual, and I find myself briefly alone in the shimmer of the Ice Palace, which mountaineers hacked out by pick-axe in the 1930s. From the terrace, the view reaches across a ripple of pearl-white 4,000m peaks and the 23km twist of the Aletsch Glacier, the longest glacier in the Alps, now sadly retreating. It’s a clear day, the sky piercing blue. Where the Swiss Alps fizzle out, Germany and France appear like pencil smudges of green in the distance.

“The Unesco World Heritage Jungfrau-Aletsch region is unique and it’s our job to preserve it for future generations,” says Jungfrau Railways spokesperson Kathrin Naegeli. “Our projects pay close attention to the wildlife and habitat, reducing energy consumption and improving biodiversity, setting up conservation areas and funding research. Some villages, such as Wengen and Mürren, are car-free and can only be reached by public transport. Some railways, for instance the Jungfrau and Wengernalp lines, use brake energy to generate new electricity.

“We want to encourage people to explore in a slower, calmer, greener way.”

A cornerstone of this approach is diversification. Skiing has traditionally had a bad rep on the environmental front, but the Jungfrau Region mitigates this by offering a flurry of low-impact alternatives away from the slopes.

I dive in the deep end with my partner and two-year-old daughter, grabbing a toboggan and whooshing down the Eiger Run from Eiger Glacier to Kleine Scheidegg – no ski school or fancy gear required. The region’s big three, Eiger, Mönch and Jungfrau, glow down as we negotiate swooping bends, collide with snowdrifts, pick up speed in forests sculpted with hoarfrost and stop, ruddy cheeked, at timber huts for rösti and hot chocolate. It’s tremendous, childish fun – as addictive as rollercoasters. Reach the end and you’re itching to do the whole thing all over again.

And we do. In Wengen we hit the Fox Run, pinballing down the mountain to the village as a snow blizzard snuffs out the view and paints everything white. We pause to build snow creatures in silent, frozen woods, admire icicles encrusting gnarly peaks, breathe in the crystal air and catch perfect snowflakes – things you’d never even consider doing when skiing.

The next day we make for Kleine Scheidegg to rent a Velogemel, the region’s one-of-a-kind wooden ski-sled-bike hybrid. Invented by a carpenter from Grindelwald in 1911 to make getting around the Alps a breeze for everyone from postmen to doctors, the wacky contraption now has cult status and its own world championships in February. The thing looks utterly terrifying, but after playing with it for a few wobbly minutes, I slowly get the knack and start flying down the mountain, frantically digging in my heels to brake.

Grindelwald is also the starting point for a gondola ride up to First, where thrills come in the shape of feet-first (First Flyer) and head-first (First Glider) ziplines racing towards Eiger North Face. But for an away-from-the-crowds adventure, we choose the tough uphill hike to Faulhorn instead, tugging sledges for two and a half hours through the snow to reach Big Pintenfritz, Europe’s longest toboggan run at 15km. Opening up sensational views of the glaciated Bernese Alps, the dash through forests and down steep slopes leaves us frozen, aching and exhilarated.

Hotel Glacier is our Grindelwald base. Named after the Lower Grindelwald Glacier, which has retreated so rapidly in recent years it is no longer visible from the valley, the 28-room boutique hotel is an ultra-stylish revamp of a traditional Alpine chalet. There’s an intimate spa and ultra-stylish rooms with a glacier theme, neo-rustic design and an ice-cool palette of silvers and blues – some with hot tubs echoing the contours of the mountains. And it’s all as green as can be. Materials are natural and sustainably sourced, waste is minimized and energy comes from the local biomass plant.

The hotel’s restaurant is the clincher, with a tasting menu that is clever, imaginative and takes pride in local sourcing – so much so that head chef Robert Steuri has drawn up a provenance map pinpointing produce, from Grindelwald beef to Lake Zurich mussels. Dishes like locally smoked sturgeon with Swiss caviar and kohlrabi and braised Swiss wagyu with black truffle and egg-yolk praline are flawlessly cooked and presented.

Our final day ends on another high at the eyrie-like Piz Gloria at the top of Schilthorn, which starred in the 1969 Bond film On Her Majesty’s Secret Service. The sun breaks over the mountains as we float up to the summit, gasping as the gondola sheers ice from the cables and swings close to huge fists of rock. We’re among the first visitors of the day for brunch at the solar-powered revolving restaurant, where the views take in the entire sweep of the Alps.

As glorious as the summits are, sometimes the hidden, quietly beautiful places leave the most lasting impression. And so it is when we descent to Mürren, slipping on snowshoes to pad high above the log chalets and into the spruce forest, which occasionally draws back like a theater curtain to reveal front-row views of the Jungfrau massif.

“Alpine hare prints,” whispers Anita Rossel, a guide with Bergfalke Alpine School, pointing out a thin track in the snow as we pick our way along a trail whipping up to the moorland nature reserve of Chänelegg. As we head up and over the hilly plateau beneath a pale winter sun, the chat turns to her de ella avalanche-trained sheepdogs, the drastic impact of climate change on snow levels and the low-impact winter activities she offers, such as igloo building . But mostly we walk in companionable silence, with just the crunch of snow underfoot and Eiger on the horizon.

The region is brilliantly connected to the rest of Europe by train, and Swiss ones are very eco friendly, drawing 90 per cent of their energy from hydropower.

If you decide to fly, SWISS fare the best environmentally, with firm goals for slashing CO₂ emissions and carbon offsetting schemes.

Doubles at the four-star Hotel Glacier from £244. hotel-glacier.ch

Mountain transport takes over once you reach Interlaken. Two handy, money-saving passes worth investing in are the Swiss Travel Pass and Jungfrau Travel Pass.

‘I’m a Ukrainian refugee and I need to transport husband’s sperm 1,750 miles for a baby’