Skip to content
Home News On the front lines: Inside the Ukrainian border town with strong ties to Russia 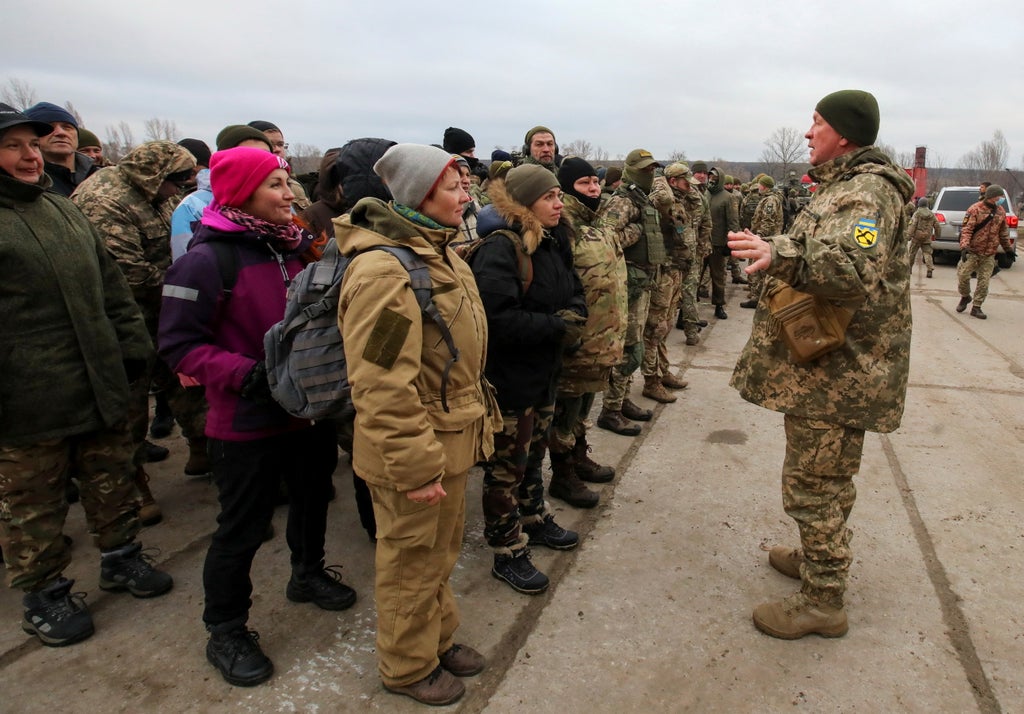 “It is unthinkable that my friends and I would take a weapon and start fighting the Russians. We have lived together all our lives and now there are people who are trying to make enemies of us and start a bloodbath,” Kiril Semenov declared angrily.

As diplomatic options to prevent a new war in Europe appear to fade, Ukrainians are bracing for what they fear will be dark and violent days ahead. Thousands have rushed to join groups of volunteers vowing to resist an invasion ordered by Vladimir Putin, which they believe may be imminent.

But there are others who maintain that a conflict is being created by the behavior of the Kiev government, encouraged by the West, inciting Moscow to a war that will end in disaster for Ukraine.

It is not a popular opinion in much of the country that sees a force of more than 100,000 Russian soldiers concentrated on the border and the Kremlin making the moves to talk to the West before launching an offensive.

But, standing in Freedom Square in Kharkiv, Mr. Semenov was expressing views that are held, to a greater or lesser extent, by a sizeable number of the Russian-speaking population in this city.

“This war is being provoked by the Americans and NATO telling the people in Kiev not to compromise, using Ukraine again as their proxy,” the 48-year-old electrical engineer said. “And if the fighting starts, will NATO come here to fight the Russians? Of course not, they’ve already said they wouldn’t.”

Kharkiv is only 25 miles from the Russian border and 150 miles from Donetsk and Luhansk. Some of the vicious fighting that led to those two cities becoming breakaway republics eight years ago was also present here.

About 74 percent of Kharkiv’s 1.4 million people are Russian speakers. Last week, the President of Ukraine, Volodymyr Zelensky, claimed that Moscow could try to seize the city under the pretext of “protecting” these people, an act that “will be the beginning of a full-scale war”.

Kharkiv is also the base of operations for Yevhen Murayev, a former Ukrainian MP who was appointed by the British government as Putin’s handpicked leader of a puppet regime following the invasion and occupation.

That claim, however, has been met with widespread skepticism. Murayev himself has threatened to take legal action against the UK government and has invited it to show evidence to support the accusation.

Russian ties to the city, however, have been around for a long time.

Viktor Yanukovych, the pro-Moscow president whose ouster in the Maidan protests led to the 2014 conflict and the breakup of Ukraine, briefly planned to establish a base in Kharkiv after fleeing the capital. But he soon went to Crimea and then disappeared and went into exile in the south of Russia.

“There were a lot of problems here in 2014, as you will remember, like the cities of Donbass. That calmed down a bit, but now there is a lot of tension with the talks about the war. And, all the time, there’s all these unnecessary divisive things,” Semenov said, pointing to a recruiting tent with photos and inspiring quotes from Winston Churchill, Charles De Gaulle, and caricatures of Putin and Soviet-era Russian leaders. .

As Semenov spoke, a woman trudging through the snow stopped for her to say: “They are trying to give the impression that Kharkiv is an anti-Russian city, we are not. The Russians are our brothers and they will never harm us, let alone attack us. This is all US and NATO propaganda. Ukraine should be lucky to have a leader like Putin.” She refused to give her name.

Mikhail Petrovich Godunov, director of the Kharkiv Society of Eastern Slavs, an association of Russian speakers, opined that “Zelensky created a lot of tension by what he said, he made people afraid about the future.

“There has been a lot of Russophobia and xenophobia in the last two months. There are things like language laws according to which a clerk must first speak to a customer in Ukrainian instead of Russian, why create such divisions?

Godunov, a retired lawyer, does not think there will be a war.

“I don’t think there will be an invasion. Putin is a smart man: he is not going to do something so risky. They’re talking about 100,000 troops across the border from here, but you’d need a million troops to invade Ukraine.

“The problems of civilians in the east of the country are not being addressed,” he said. “These people in the gray areas (front lines) and the republics (Donetsk and Luhansk) cannot live a normal life, even movement is difficult due to checkpoints, there is resentment about this… But as for Kharkiv, there shouldn’t be any problems here, there would be no violence.”

Nicolai, a 26-year-old in the construction business who speaks Russian, wasn’t so sure.

“There are a lot of people who are fed up with the way Russian culture is treated here. Do not forget that this used to be the capital of Ukraine, we are aware of our identity.”

Nicolai, who did not want his last name to be made public, said he participated in the 2014 confrontation “with the fascists” and has no regrets about doing so. “I’m older now with a family and I don’t want to get into any trouble, but I wouldn’t like any provocation to start a war with Russia,” he said.

The city’s mayor, Igor Terekhov, insists that everything is under control.

“I want to assure everyone that we are ready to give a firm rejection to a potential invader, we have all the forces to defend Kharkiv,” he said in a public message, calling for “calm.”

Not everyone can keep calm. Viktoria Palmarchuk’s family fled Crimea after Russia annexed it in 2014 and she is all too familiar, she says, with the feelings of fear that drive people to uproot themselves.

“I know that the situation is not the same here as in Crimea. But I also remember how quickly things changed there for all of us. Suddenly everything became polarized and things changed for those who were not loyal to Russia. I remember how much more Russian our neighbors suddenly became and we became outsiders,” said Ms. Palmarchuk.

“It really is a precaution, but we are thinking of moving to Kiev or maybe Lviv until this situation is resolved. Both my husband and I work in IT, and we can work from anywhere, that helps. But we can’t help but worry.

Kharkiv is an industrial city that has been home to aircraft, tank and tractor factories. However, in recent years it has become a technology hub, with more than 50,000 people employed in IT, with the ambition of leading the region to become Ukraine’s Silicon Valley.

“It is strange to think that here we are in an advanced, sophisticated sector and at the same time we have to face something as primitive as war,” reflected Andryi Yurchenko.

Sitting in a downtown bar, the 26-year-old software engineer said he would have to watch his alcohol intake because he had started taking additional training classes in the government’s volunteer force.

“I don’t think war is a logical way to solve problems. But we have a man in Moscow, Mr. Putin, who is not a very logical person, and what he does affects all of our lives. We don’t know what is going to happen, this city is quite mixed, hopefully there will be no divisions,” Yurchenko said.

At the snowy border post between Ukraine and Russia, two old friends also hoped that the communities would not fracture. Sergei Gretsov, Russian, and Sergei Svetocech, Ukrainian, both 62 years old, have known each other for 40 years since they met at university.

“We have been crossing the border to come with our families with all our other friends to eat, drink, shop without any problem,” said Mr. Gretsov. “We would like to think that this would continue for our children, but we are worried about everything that is happening.”

Svetocech had no doubt that, left to themselves, the people of Kharkiv would not fight each other. But “there are politicians who are trying to use people to turn against each other,” he said.

“I’m sure there’s also some corrupt business mixed up in this, this mix, politicians and companies make a profit every time there’s trouble.”