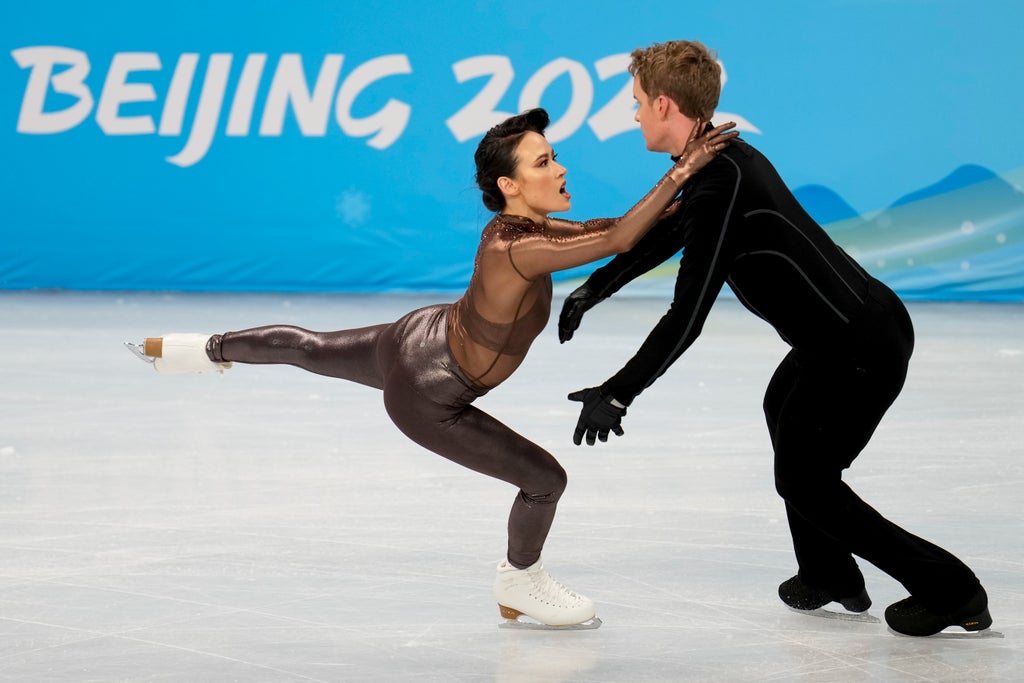 When Madison Chock looks outside here in the Chinese capital, the US Olympic ice dancer sees glimpses of herself.

“Every time I’m on the bus, I’m just looking out and studying the city and just imagining my roots are here, my ancestors are here,” says Chock, whose father is Chinese-Hawaiian, with family ties to rural China “And it’s a very cool sense of belonging in a way, to just be on the same soil that your ancestors grew up on and spent their lives on.”

At the Beijing Winter Games, opening Friday, it’s a homecoming of sorts for one of the world’s most sprawling diasporas — often sweet and sometimes complicated, but always a reflection of who they are, where they come from and the Olympic spirit itself.

The modern Chinese diaspora dates to the 16th century, says Richard T. Chu, a history professor at the University of Massachusetts at Amherst. Its members have ranged from the drivers of the colonial economy and laborer workforces on land and sea, to the highly educated who moved away for a chance at greater prosperity, to the unwanted baby girls adopted internationally during the government’s one-child policy.

“The Chinese diaspora is really very diverse, to the extent that they maintain their Chinese-ness,” Chu says. “There’s no one kind of Chinese identity because each country has a unique kind of history.”

The question of ethnic Chinese identity is an especially delicate one for athletes with roots in Hong Kong and Taiwan US women’s singles figure skater Karen Chen, whose parents immigrated from Taiwan, says she identifies as both Taiwanese and Chinese, and uses those labels loosely and interchangeably .

Taiwan, which split from the mainland after a 1949 civil war that propelled the current Chinese government into power, is an island of 24 million people off China’s east coast. It functions in many ways like a country with its own government and military. But China claims Taiwan as its territory, and only 14 countries recognize Taiwan as a nation. Most nations of the world, including the United States, have official ties with China instead.

Chen’s self-identification is not uncommon among the Taiwanese, as many trace their heritage back to mainland China. Some 32% of the islanders identify themselves as both Chinese and Taiwanese, according to an annual survey by National Chengchi University in Taipei.

While in Beijing, she’s pledged to speak as much Mandarin as possible and is proud to give a nod to her heritage on the ice.

“My free program is to ‘Butterfly Lovers Violin Concerto,’ which is such a famous and classical piece that came from China … it’s kind of a Chinese version of Romeo and Juliet,” Karen Chen says. “It definitely relates to my background.”

The many athletes of Chinese descent here at the Beijing Games represent the many variations of the diaspora: some are one, two or many generations removed; others are biracial and multicultural.

And even similar backgrounds can diverge on the Olympic stage. For example, Nathan Chen and Eileen Gu are two superstar athletes facing the Winter Games. While both were born and raised in the US by Chinese immigrants and have fond memories of spending time in their ancestral homeland, Chen is competing for the US team as a medal contender in men’s singles figure skating, and Gu is the hotshot freestyle skier competing for China.

Gu has raised eyebrows for switching to the China team after training with the US team, but the San Francisco native — who speaks fluent Mandarin and makes yearly trips to China with her mom — is clear-eyed about how she defines herself.

For some, the Olympics in Beijing is the first time they’ll set foot in China, an unforgettable professional accomplishment on top of a very personal milestone.

That’s the case for US women’s singles figure skater Alysa Liu, whose father Arthur Liu also longs to visit China. The elder Liu left his home country in his 20s as a political refugee because he had protested the Communist government following the 1989 Tiananmen Square massacre.

Arthur Liu eventually settled in the Bay Area, put himself through law school and nurtured one of America’s most promising athletes. Now his Chinese-American daughter is set to make her Olympic debut in the women’s singles competition. He has no qualms about her competing in the Olympics in China, and no resentment toward a home country he still loves.

Like many biracial children, Alyssa Liu used to wonder why she didn’t look like her parents though she has always identified as ethnically Chinese. Arthur Liu and his then-wife of him, who is also Chinese, decided to have children via surrogacy and sought white egg donors because Arthur Liu saw himself as a citizen of the world and wanted biracial children.

In a culture that can be xenophobic, Arthur Liu says his daughter is warmly embraced by his home country, as Chinese fans and media consider Alyssa Liu to be one of their own.

“I’m super happy the Chinese people welcome her and think highly of her,” Arthur Liu says.

The Olympics will also be the first time Josh Ho-Sang, the multiracial, multicultural Canadian ice hockey player, will visit China.

His paternal great-grandfather moved from mainland China to what is modern-day Hong Kong for business opportunities, then fell in love on vacation in Jamaica, which makes the Canadian hockey team forward one-eighth Chinese. From his mother’s side of him, Ho-Sang’s heritage is rooted in European, South American and Jewish cultures. For him to represent Canada as a “melting pot poster boy” is a testament to how inclusive the Olympic spirit has become.

“It really shows how far we’ve come as a society, to have these different faces representing home for everyone,” Ho-Sang says. “A hundred years ago, you would never see such diversity in each country that you see now. It’s a sign of hope and progress.”

Seattle-based AP journalist Sally Ho is on assignment at the Beijing Olympics, covering figure skating. Follow her on Twitter at http://twitter.com/_sallyho.