Olentzero and Mari Domingi are already prepared to walk the streets of Euskal Herria this Christmas Eve, although this year they will do so in accordance with the sanitary measures established by the pandemic. This Friday, before starting their gift-giving ritual, they will visit Vitoria-Gasteiz and Donostia-San Sebastián on a longer tour than usual. On the other hand, Bilbao and Pamplona will not have their traditional parades this year.

The parade of Vitoria-Gasteiz will increase this year its route in 700 meters with respect to the traditional itinerary to try to reduce the crowds of the public and, in this way, limit the risk of contagion by covid-19.

Thus, it will depart from the Iparralde Civic Center at 6:00 p.m., and will pass through Portal de Legutiano, Francia and Paz streets. As a novelty to extend the route and, in this way, try to reduce the crowds, the parade will also run through Ortiz de Zárate and Florida streets. The journey will end at the intersection of Florida Street with San Antonio.

For its part, in the Gipuzkoan capital the parade, also scheduled for 6:00 p.m., will be expanded in several streets adjacent to Avenida de la Libertad and Plaza Gipuzkoa will be included in the tour. In addition, the mythical characters will travel by car to different neighborhoods of the city before leaving their gifts to all the boys and girls from San Sebastian, who will be able to deposit their letters in the area that will be installed on the terrace of Alderdi Eder in front of the Town Hall, from 15: 30 to 17:30 hours.

In Bilbao, where this year the traditional kalejira of the charcoal burner and his companion has been suspended, children will be able to enjoy a christmas musical show that will take place at the Arriaga Theater in three countries; at 9:30 a.m., 11:15 a.m. and 1:00 p.m.

Too Pamplona-Iruñea announced the cancellation of his parade last Tuesday despite its initial decision to keep it, although the organizing association recognized then that they had had “internal discussions and doubts.”

Lekeitio did the same and, in the absence of a parade, Olentzero and Mari Domingi They went out this Thursday to the balcony of the City Hall to greet the local children, to later distribute the gifts to their homes.

The mythical characters also went ahead in Bayonne, where they arrived on December 12 accompanied by a large group of musicians.

Apart from the cancellations, multiple towns in the Basque Country will enjoy their own kalejira and others will organize parades through neighborhoods. In any case, EITB wishes you happy holidays and a 2022 in which we can see many good birds, good birds. Congratulations and happy New Year! 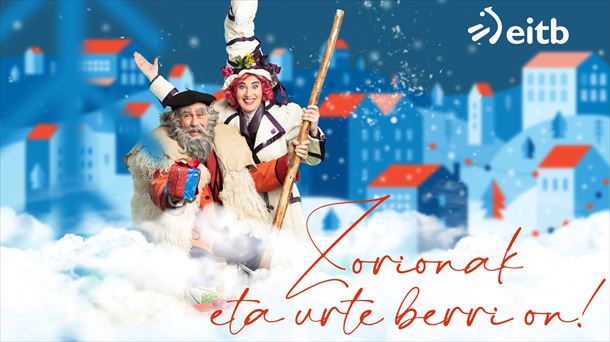