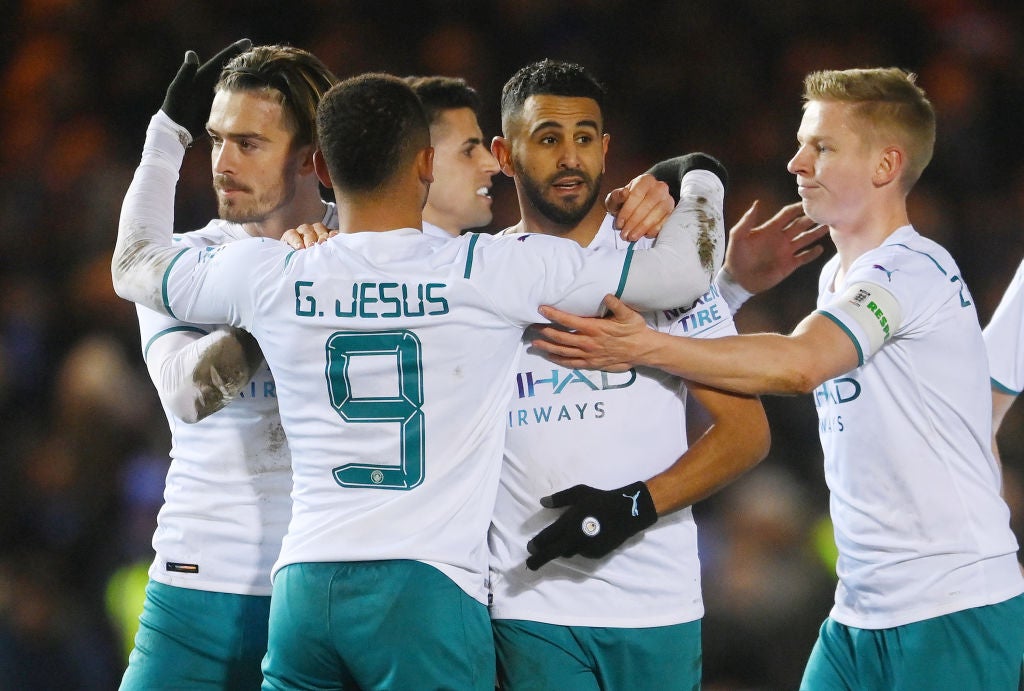 There are few surer things in English football than Pep Guardiola’s Manchester City progressing past lower league opponents in a domestic cup tie but for an hour, Peterborough United made an unlikely place in the FA Cup quarter-finals look possible.

Never mind that they sit bottom of the Championship, with no win in the league since December and 71 goals conceded in all competitions this season having parted ways with promotion-winning manager nine days earlier. Grant McCann’s side were competitive and perhaps even had the better chances until the inevitable.

Rather than a place in the last eight, Peterborough’s reward for this battling display against the Premier League champions is the look of slight but significant relief on Guardiola’s face in London Road’s away dugout when Riyad Mahrez broke the deadlock.

Jack Grealish added another, the £100m record signing scoring the fourth goal of his Etihad career, but the 2-0 scoreline was reflective of how difficult Peterborough made things for the favourites.

Anyone familiar with Guardiola’s approach to the third and fourth-round wins over Swindon and Fulham – or to the world’s oldest cup competition since his arrival in Manchester six years ago – would not have been surprised by the strength of the starting line-up. It was a full complement of senior internationals, not a young novice in sight, meaning that the most newsworthy inclusion was that of Oleksandr Zinchenko.

In his first appearance since last week’s invasion, the Ukrainian wore the City armband for the first time having been handed it before kick-off by Fernandinho, who has a connection to Ukraine himself as a former Shakhtar Donetsk player. Zinchenko led his team out while carrying his country’s flag with help from Peterborough skipper Frankie Kent in a show of solidarity.

Zinchenko twice came close to capitalizing on City’s predictably dominant start, though neither effort was particularly close at all, one wide of Peterborough’s goal and the other wide. City spent plenty of time around the edges of the penalty area, passing and probing and searching for an opening, but their opponents looked just as threatening on the counter-attack.

A ball over the top released Jeando Fuchs, putting him in a shoulder-to-shoulder battle with Nathan Ake. Fuchs won, buying himself enough room to get a shot away and test Ederson’s reactions, forcing a low save to prevent the ball sneaking past him at his near post. And for all City’s superiority, Peterborough’s disciplined and organized defending meant that it would be the only shot on target of the first half.

Things could have got even better for the second-tier side when play resumed, with two chances in quick succession. First, Sammie Szmodics turned a bouncing long throw wide of the post. Then, Josh Knight believed a sight of goal was about to open up for him, only for Phil Foden to slide in on the cover and block. This was shaping up to be a very different evening from the one many had expected.

Until suddenly, it wasn’t. City only ever needed an inch, that was all the space Mahrez had and it was between the legs of wing-back Hayden Coulson. A shimmy inside from the right and a bit of quick feet created the room required to roll a shot towards the far post that seemed to take goalkeeper Steven Benda by surprise, or at least leave him wrong-footed. City’s quality had finally come to bear.

See also  Windfall tax to raise £5bn, but firms promised relief if they invest in Britain

The second was even better. Foden, occupying a deeper midfield role than he is used to playing this season, was beginning to dictate the play and pinged a cross-field ball from the edge of his own half to the Peterborough penalty area. Grealish was on hand to receive with an immaculate first touch. His second he rolled the ball underneath the onrushing Benda to double City’s lead.

City’s place in the quarter-finals was booked but Peterborough were not broken. Ederson had to be alert to beat away an effort by substitute Jack Marriott, shooting with practically his first touch from him, but it was straight down his throat from him. City were comfortable, though, and comfortable enough for Aymeric Laporte’s late miss of an open goal not to matter. By then the game was already won, even if it had not been won easily.