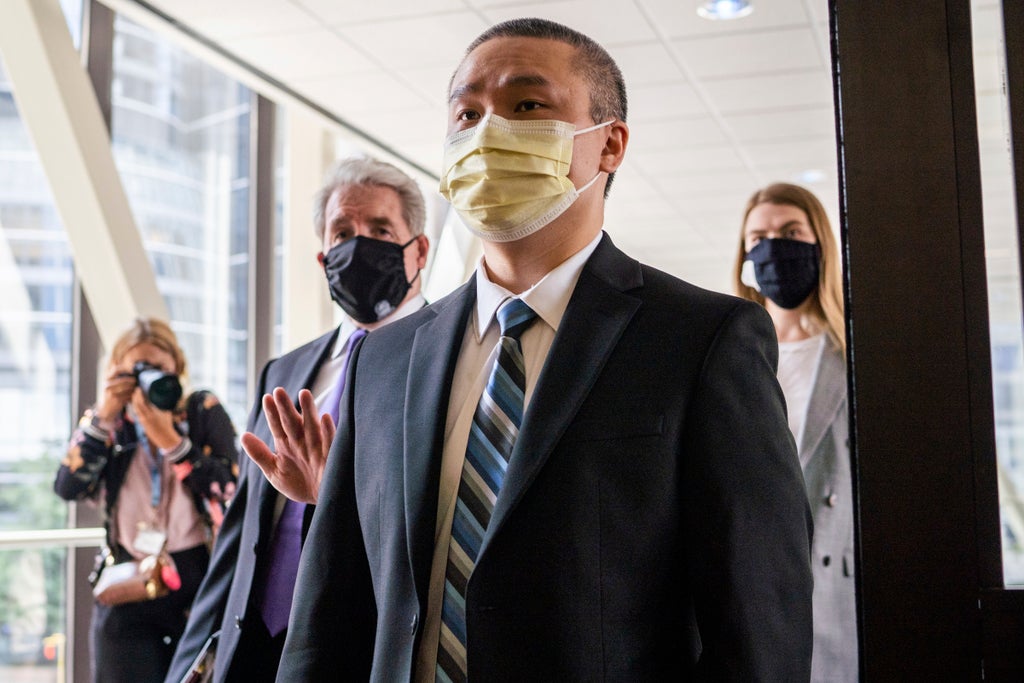 A former Minneapolis police officer charged in George Floyd’s killing testified that he was relying on his fellow officers to care for Floyd’s medical needs while he controlled traffic and onlookers as police tried to arrest the Black man.

Tou Thao is one of three former officers charged in federal court with violating Floyd’s constitutional rights when Officer Derek Chauvin pressed his knee into Floyd’s neck for 9 1/2 minutes as the 46-year-old man was handcuffed, facedown on the street. Thao is scheduled to resume testifying Wednesday.

He testified Tuesday that when he and Chauvin arrived, Officers J. Alexander Kueng and Thomas Lane were struggling with Floyd. Thao said he took a position on the roadway to serve as “a human traffic cone” to keep cars away from the other officers. Kueng knelt on Floyd’s back of him, while Lane held his legs from him.

Thao said he heard onlookers becoming more anxious about Floyd’s condition and calling on officers to check his pulse. But he said his role was crowd control; there were about 15 bystanders.

His attorney, Robert Paule, asked Thao whether he saw any officers roll Floyd over and perform CPR. He said he did not, and presumed that meant Floyd was breathing.

“It indicated that Mr. Floyd was not in cardiac arrest,” said Thao, who later testified that he didn’t know there was anything seriously wrong with Floyd even as an ambulance took him away.

But prosecutor LeeAnn Bell noted video shows Thao looking at the other officers much of the time and suggested that bystanders and traffic were not big threats. Thao acknowledged under cross-examination that he did nothing to provide medical care to Floyd or intervene to stop Chauvin even after it appeared to him that Floyd was no longer resisting.

Thao conceded he was standing near Floyd when he stopped speaking and moving.

“And you know that’s a red flag,” Bell said.

“Not always, but you should take note,” Thao replied.

Thao, Kueng and Lane are accused of depriving Floyd of medical care. Kueng and Thao are also accused of failing to intervene to stop the May 25, 2020, killing, which triggered protests worldwide and a reexamination of racism and policing. The charges allege the officers’ actions resulted in Floyd’s death.

Prosecutors rested their case Monday after calling to the stand doctors, police officers and bystanders to build an argument that the officers should have intervened to stop Chauvin and that they violated their training by not rolling Floyd onto his side so he could breathe or giving him CPR .

Defense attorneys are seeking to show that the Minneapolis Police Department provided inadequate training and taught cadets to obey superiors. Chauvin, who was convicted of state murder and manslaughter charges last year, was the most senior officer at the scene.

Thao testified that he was taught that it was sometimes OK to use neck restraints to help handcuff someone. But under cross-examination by Bell, Thao agreed that using a knee to get someone under control is different from using it to restrain someone who’s already handcuffed — and that the neck should be avoided once someone is under control.

Asked if what Chauvin was doing was a trained neck restraint, Thao replied, “I don’t believe so.”

Police tried to arrest Floyd after responding to a 911 call that he used a counterfeit $20 bill at a corner store.

Thao said it was obvious to him, as the other officers struggled to put Floyd into a squad car, “that he was under the influence of some type of drugs.” He said it seemed clear that Floyd was in a state of “excited delirium” — a disputed condition in which someone is said to have extraordinary strength.

Thao also said that although he heard Floyd saying, “I can’t breathe,” he could not see anything from where he was standing that would have interfered with Floyd’s breathing. He also that on several occasions, he had heard someone say they could n’t breathe but he was n’t sure they were being honest.

But he later agreed with the prosecutor that officers can’t ignore such pleas even if someone is lying.

Lane, who is white; Kueng, who is Black; and Thao, who is Hmong American, also faced a separate state trial in June on charges alleging that they aided and abetted murder and manslaughter.

Chauvin, who is white, pleaded guilty in December to a federal civil rights charge.