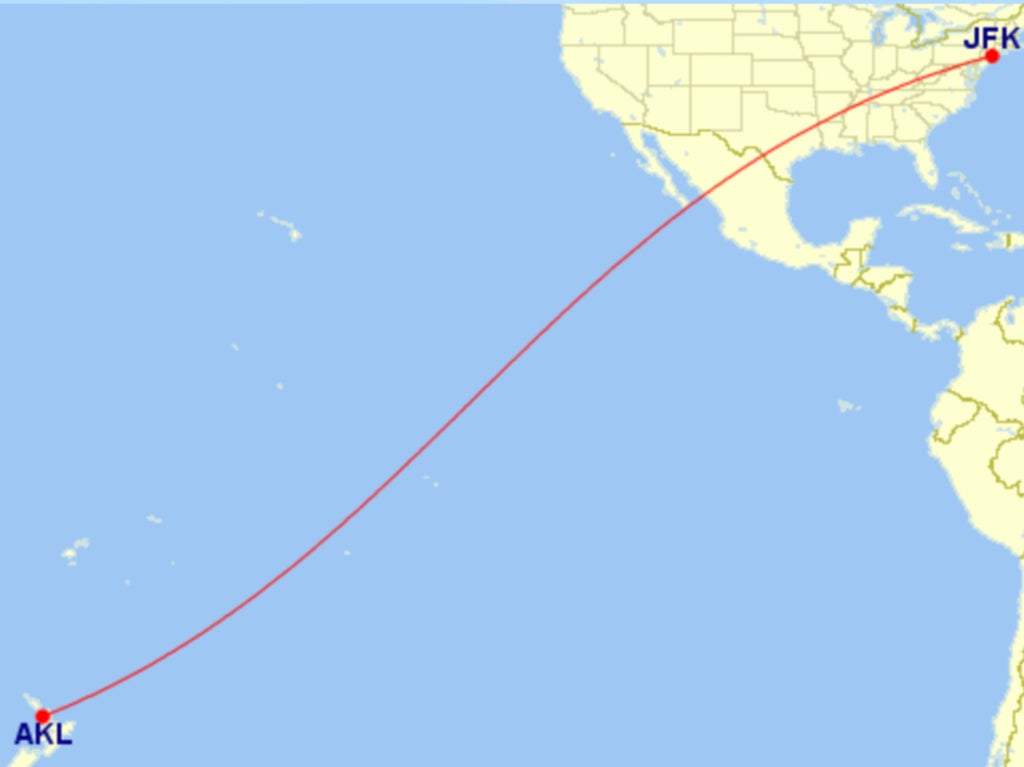 Air New Zealand plans to launch one of the longest flights in the world, connecting New York with its hub in Auckland.

From 17 September the carrier will fly the 8,828-mile route three times per week, using a Boeing 787-9 – the same type used by Qantas for its even longer nonstop link from London to Perth.

The flights will be coded NZ1 and NZ2, previously used for the now-dropped link from London Heathrow.

The schedule shows NZ1 departing at 9.55pm on Mondays, Thursdays and Saturdays from New York JFK, arriving at 7.30am two days later in Auckland – after a planned overnight journey of 17 hours 35 minutes that crosses the international date line.

In the reverse direction, NZ2 appears to show some travel time: leaving Auckland at 7.40pm on Mondays, Thursdays and Saturdays, touching down at 7.55pm the same day – just 15 minutes later, local time, at New York JFK. This north-eastbound service is scheduled to take 16 hours 15 minutes.

The most direct track from New York to Auckland shows that all but 27 per cent of the journey is over the Pacific Ocean. The direct flightpath – which is likely to be significantly modified according to wind patterns – flies over Dallas, crosses into Mexican airspace at the Rio Grande and touches the southern tip of the Baja Peninsula, before its oceanic journey of 12 hours or more.

Air New Zealand’s chief executive, Greg Foran, said: “For the first time, Kiwis can visit the city of all cities with a non-stop flight.

“To ensure customers arrive in New York feeling refreshed, we’ve put a lot of thought into the onboard experience and teams are working around the clock to make sure this a great flying experience.

“The US has always been a key market for us, and this new route cements our commitment to developing growing tourism opportunities between the two countries.”

New Zealand will remain closed for international tourism until 11.59pm on 1 May – one of the longest Covid travel bans of any country.

Air New Zealand offers 13 “Skycouches” that allow one or two economy passengers to stretch out across three seats.

It will also provide 33 premium economy and 27 business class seats.

Passengers from the UK will be able to connect at JFK on British Airways, Virgin Atlantic, American Airlines and Delta. The route will also offer a new stopover possibility for round-the-world travelers who wish to make only one US touchdown.

Haydn Wrath, founder of long-haul specialist Travel Nation, said: “We are particularly excited about this new flight as it promises to be a real crowd pleaser.

“NYC-Auckland can be included on some fantastic round-the-world deals, such as Virgin Atlantic for the London to New York section, onwards to Auckland with Air New Zealand and then from either Auckland or Christchurch in the South Island with Singapore Airlines to London or Manchester with a stop in Singapore at around £1,500.

“There are times when airlines introduce new routes when we wonder if they will stick. We think that NYC-Auckland will live up to its re-assigned NZ1 and NZ2 flight numbers become one of those perennial flights.”

Air New Zealand is a member of the Star Alliance alongside United Airlines and Air Canada, but oddly the new flights will serve JFK airport rather than the main hub, Newark.

When the route starts, NZ1/2 is likely to be the fourth-longest in the world – behind Singapore Airlines’ links to its hub from New York JFK (9,537 miles) and Newark (9,534 miles) and Qantas flight 9 from Perth to London Heathrow (9,009 miles) – which is due to resume on 27 March after a two-year shutdown.