Skip to content
Home News Nuclear energy in the face of climate change: advantages and inefficiencies 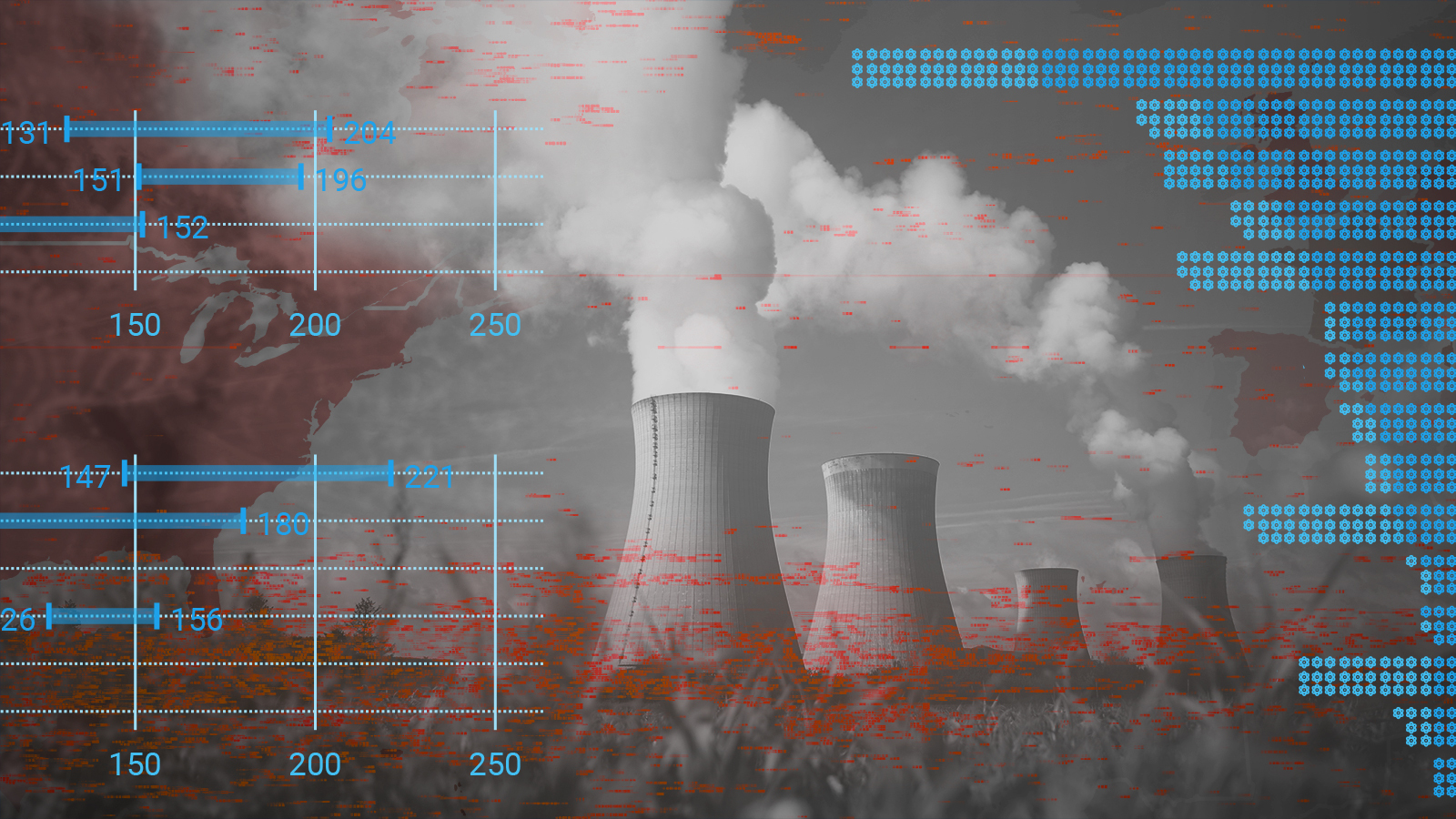 The urgent need to reduce polluting gas emissions to curb global warming has returned to the nuclear energy to the center of the debate on the available alternatives. However, its use raises a complex dilemma between costs and benefits: It is a clean energy from a climate change point of view, but it is expensive, does not provide flexibility to the electricity supply and, in addition, generates hazardous waste that will last for centuries.

The use of atomic energy to obtain electricity has been maintained stable so far in the 21st century, despite its unpopularity. Although the total number of nuclear reactors has hardly changed in the last two decades, the generation capacity in the world as a whole has grown a little more than 12%, to around 400 gigawatts, according to data from the International Atomic Energy Agency (IAEA), dependent on the United Nations.

Is a relatively small amount, around 4% of the world’s energy, and it is far, for example, from the generation capacity of renewable sources, which already far exceeds 2,500 gigawatts. its usage in the world is very unevenAs there are countries that have given up using it, such as Italy, Australia and, as of 2022, also Germany, while others such as France and Ukraine obtain more than half of their electricity from fission.

Its greatest expansion occurred in the last quarter of the last century, while in the 21st century it has hardly grown. In 2020, only 32 countries had active reactors -among them Spain, with seven- and 80% of the nuclear generation capacity was concentrated in just eight: the United States, France, China, Japan, Russia, South Korea, Canada and Ukraine. But that trend may change if, with humanity facing the enormous challenge of climate change, society perceives it as an acceptable energy route.

Its great virtue, in that sense, is that it is about an energy that does not pollute the atmosphere: nuclear generation does not emit carbon dioxide or other greenhouse gases, only water vapor as a consequence of the cooling processes of the reactors. Although water vapor also heats the atmosphere, its presence in the air is very short as it is part of the water cycle and its accumulation, contrary to what happens with CO2, has not changed significantly in the last decades.

“It is an energy source that does not generate CO2, very suitable for the main problem that humanity has at the moment, climate warming “, he emphasizes Francisco Calviño, Professor of Nuclear Engineering at the Polytechnic University of Catalonia, who also highlights that “it takes up very little space to produce a huge amount of energy”, unlike renewables.

Its defenders often argue, in addition, that it can serve as a source of back given the intermittency of renewables, that is, providing the energy that is needed when there is no sun to illuminate the photovoltaic panels or wind to drive the mills. This aspect is the weak point of renewables, pending the development of technologies that improve and lower the cost of electricity storage capacity, which is now very limited, in order to adapt supply to demand.

However, nuclear energy has a serious lack to perform this function, his lack of flexibilityWith today’s technology, nuclear power plants must operate at maximum capacity and can barely keep up with the ups and downs of demand. “Nuclear energy is valid to give firmness to the supply, not support,” he says. Pedro Linares, Professor of Industrial Organization at the Universidad Pontificia de Comillas, which indicates that it does not exempt the availability of gas, that it is flexible to adapt to peaks in demand, or storage capacity. “With current technology, it is true, although France, which has many reactors, is able to do some monitoring of the demand curves,” concedes Calviño.

To this inconvenience is added the high price of energy generated by atomic fission, largely because of the cost of building, maintaining and dismantling nuclear power plants. “It is a very expensive technology, unless there is a crazy growth in demand”, explains Linares, who stresses that it is “much more expensive than renewables”, although he warns that, if the storage of renewable energy is taken into account, the cost tends to equalize.

The Lazard investment bank calculations, which each year prepares an analysis of the comparative cost of each megawatt-hour depending on the source, corroborates that nuclear is an expensive energy: in 2021, it estimates an average of $ 167 per MWh, compared to $ 60 for the combined gas cycle, 38 from wind and 36 from solar photovoltaic.

In addition, renewables have greatly reduced their cost in the last decade and, as their penetration increases, they can finally corner nuclear. So he thinks Eloy Sanz, specialist in renewable energy at the Rey Juan Carlos University and expert reviewer of the report of the Intergovernmental Panel on Climate Change (IPCC), who draws a scenario for a decade in which renewable sources will account for 75% of the energy produced.

“Driven by renewables, the rest of the technologies of the mix they are going to drop in price and that affects more those with more fixed costs. Gas is very flexible, combined cycle plants can reduce their production to 30% or 40% and restart. But nuclear power plants cannot stop and start in a short time; they are going to close because they are not going to be profitable, “he predicts.

However, while reaching that scenario, it is necessary to combine the different energy sources. Sanz admits that “in the short term, backup energy is necessary” and that, even when 75% renewable production is reached, a high storage capacity will be necessary to avoid intermittences if you want to do without gas and nuclear energy at the same time.

The trade-off, therefore, is whether it is worth it. build new nuclear power plants, a particularly controversial decision in Europe, where public opinion still seems reluctantAccording to the 2016 European Social Survey on climate change, 40% of Europeans do not want nuclear energy to be produced and another 20% to use it only on a small scale, while only 5% advocate massive use.

In that state of opinion, the possibility of accidents, with Chernobyl and Fukushima deeply ingrained in the collective imagination, and the complicated management of radioactive waste, which must be watched for centuries. According to the Spanish Nuclear Society, elements of low and medium radioactivity can be declassified at 300 years, while highly radioactive waste, mainly excess fuel, maintains the ability to irradiate for thousands of years.

Francisco Calviño points out that they are working on technological alternatives to reuse this fuel and that, in any case, “the amount of waste is very small: what generates the energy consumption of a Spaniard in his entire life is equivalent to a mug of beer” . However, it is an aspect that continues to concern many citizens, although opinion varies between different European countries, as shown by the division within the European Union on whether to include nuclear power in the taxonomy verde to receive the extraordinary funds for the pandemic.

The main defender of this inclusion is France, which has recently renewed its nuclear commitment, with the announcement at the height of the climate summit by its president, Emmanuel Macron, that they will build new reactors. They have not been deterred by the difficulties of the flagship of this renovation, the third Flamanville reactor, which was due to come into operation in 2012 and is now expected in 2022, after raising its expected cost from 3,300 to 19,000 million euros.

Finland, which is building its fifth nuclear reactor, or the Czech Republic also advocate this route, while Germany, Italy and Spain oppose it. Outside the European Union, United Kingdom focuses the debate on its new plant, Hinkley Point, which also accumulates delays and cost overruns -the latest estimate is between 26,000 and 27,000 million euros-, although the price of the megawatt hour is already set in the concession: 92.5 pounds ( more than 110 euros) per MWh, a cost that the British Parliament’s spending control office has described as “high and risky”.

These difficulties seem to indicate that the commitment to nuclear energy would be more appropriate in countries where very significant increases in demand are expected, which best matches its value as the base power source of the system. A) Yes, China, which already has 14 reactors under construction, has announced that it will build up to 150 more in the next 15 years. IndiaIn a comparable situation, you have six reactors under construction.

On Spain, the debate seems more focused on period of operation of the seven active reactors (Almaraz I and II, Ascó I and II, Cofrentes, Vandellós II and Trillo), which in 2020 provided the 22% of electricity, so nuclear was the first source of energy in the country. This week, the Third Vice President and Minister for the Ecological Transition and Demographic Challenge, Teresa RiberaHe assured that “there is no business group in Spain that is willing” to build a nuclear power plant. Given the the existing ones are planned to be closed between 2027 and 2035, Spain shall supply that generation with other sources -renewables set a record last year, with 45%, and the goal is to reach 74% in 2030- and it will be necessary to decide whether to support the supply with gas, which pollutes the atmosphere, or with greater storage capacity, That will raise the cost.