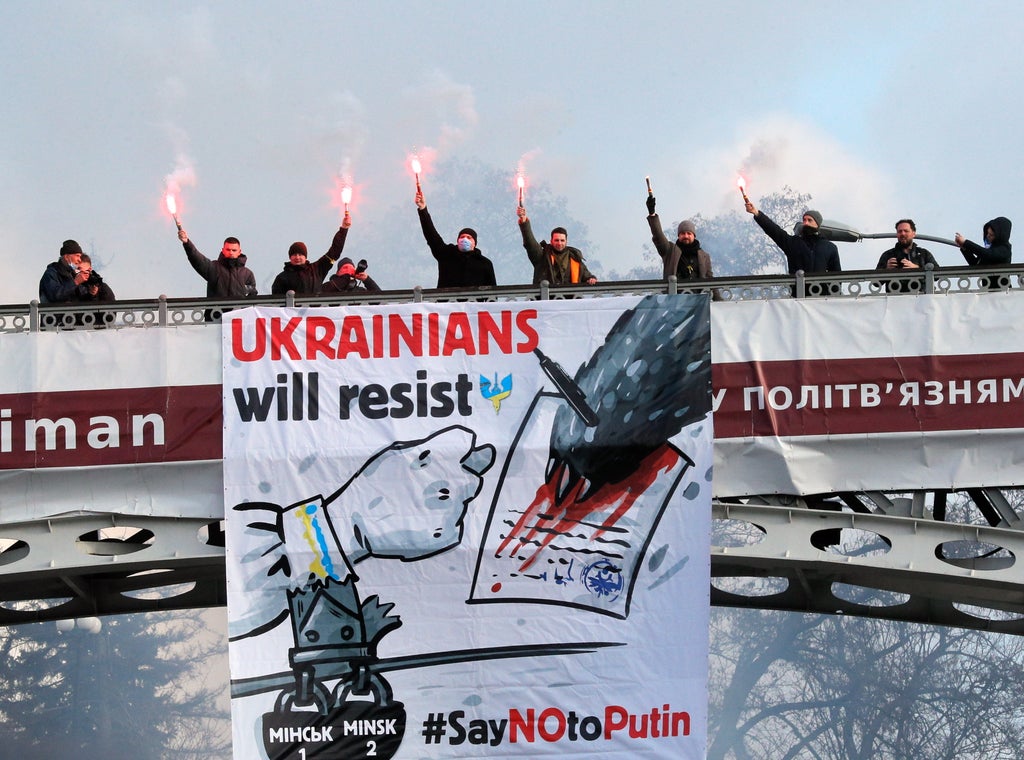 The crowd, the young and the old, families with children, gathered in their thousands in a day of sunshine and snow to call for peace, but also to pledge their solidarity in defending their land against the forces massed at their borders.

They marched under the blue and yellow flag of Ukraine to the Maidan in Kiev, the place where the protests which reshaped the country and paved the road to the current crisis with Russia had started, with chants of patriotism and defiance.

The vast majority of those present were Ukrainian. But there were also others from abroad who had settled in this country and made it their home – people who are now being urged by their governments to leave amid escalating warnings from the US and UK governments that Vladimir Putin could order an attack by the 130,000 strong Russian troops across the border.

“I am not going anywhere. I have a job, a life here, and I am going to stay if I can help it,” said Alex Wilson. “I know what the British government is saying, the warnings they are giving, but this is my choice.”

Walking alongside 33-year-old Mr Wilson from Shropshire was his Ukrainian girlfriend, Olena, who said she would understand if he had wanted to return to England and safety.

“I know his family are worried and of course they would be,” she said. “And I’ll not stand in his way. I said I’ll support whatever decision he makes and he has decided to stay. But I don’t want him to be in danger, I don’t want anyone else to be in danger.”

As well as asking nationals to leave, the UK government is withdrawing troops who have been training Ukrainian forces. “There will be no British troops in Ukraine if there is to be a conflict there,” said James Heappey the armed forces minister. “They will be leaving over the course of the weekend.”

Mr Heappey continued in a television interview: “British nationals should leave Ukraine immediately by any means possible and they should not expect, as they saw in the summer with Afghanistan, that there would be any possibility of a military evacuation.”

Mr Wilson, who works in IT, could see why the troop withdrawal was necessary.

“They would have got caught up in the fighting, they could have had casualties, get captured if there is an invasion. Nato has said it will not get involved in a war here, so I can understand this.

“But that is not something which would affect civilians like me, I don’t think anyone here expects an evacuation here like Kabul. I can’t see the Russians capturing Kiev, and a war may not take place at all for all we know.”

Dominykas Banis was also among the marchers. The 22-year-old Lithuanian student heard on Friday that his government, too, wanted him to go home.

“I am not going right now; I will wait to see what happens. It’s difficult, everything is very uncertain. We Lithuanians have had our difficulties with Russia, and I don’t know how the Russians will behave towards someone like me if they did get here,” he said.

There is disappointment among some Ukrainians that the Lithuania and Estonia, two Baltic states which have had confrontations with the Kremlin, have joined other countries in asking their nationals to get out.

“We have people like the Japanese and Australians being told to leave [by their governments]. They are from far away and one can see that they don’t want to get stuck a long way from home,” said Oleksyi Fomenko.

“The people from Western Europe going… one can sort of see why. But the Estonians and the Lithuanians have very similar struggles with Russia that we have. So it is sad that their governments have made this call. They have given us a lot of political support, but this is sad.”

The British ambassador in Kiev, Melinda Simmons, tweeted on Saturday that she will remain with a small team and the embassy will stay operational.

The US State Department said small numbers of American diplomats will remain in Kiev or go to Lviv, in the west of the country; most of the others will be posted to neighboring countries. There are also reports that all US staff from the OSCE (Organisation for Security and Co-operation in Europe) mission in Ukraine will be withdrawn.

There is a feeling among some American and British expatriates that the ratcheting up of warnings from Washington and London is linked to the disastrous failure of intelligence in Afghanistan last summer which led to a chaotic evacuation after the triumph of the Taliban.

“They are trying to compensate for that now,” said Doug, an American businessman who did not want his family name printed. “I must admit I am not totally convinced by all this intelligence Joe Biden’s people are coming out with. The Brits are saying similar things, but they follow [the] American lead anyway.”

The current spike in concern over a conflict started on Friday when there were leaks to the media that US intelligence had intercepted Russian communications discussing next Wednesday 16 February as a date for start of military operations. American officials have acknowledged privately, however, that what they heard could have been part of a Kremlin disinformation campaign.

Ukraine’s president, Volodymyr Zelensky, who had repeatedly complained in the past about alarming US rhetoric after seeing the damaging economic effect it has had on his country’s economy, asked Washington to produce evidence of an attack on the sixteenth.

“I think there’s too much out there about a full-scale war from Russia, and people are even naming dates. The best friend for our enemies is panic in our country, and all this information only creates panic, it doesn’t help us,” said Mr Zelensky.

“We should be ready on any day. We understand the risks, we understand they exist. If you or anyone else has extra information about the 100 per cent invasion of Russia starting on the 16th, please, give it to us.”