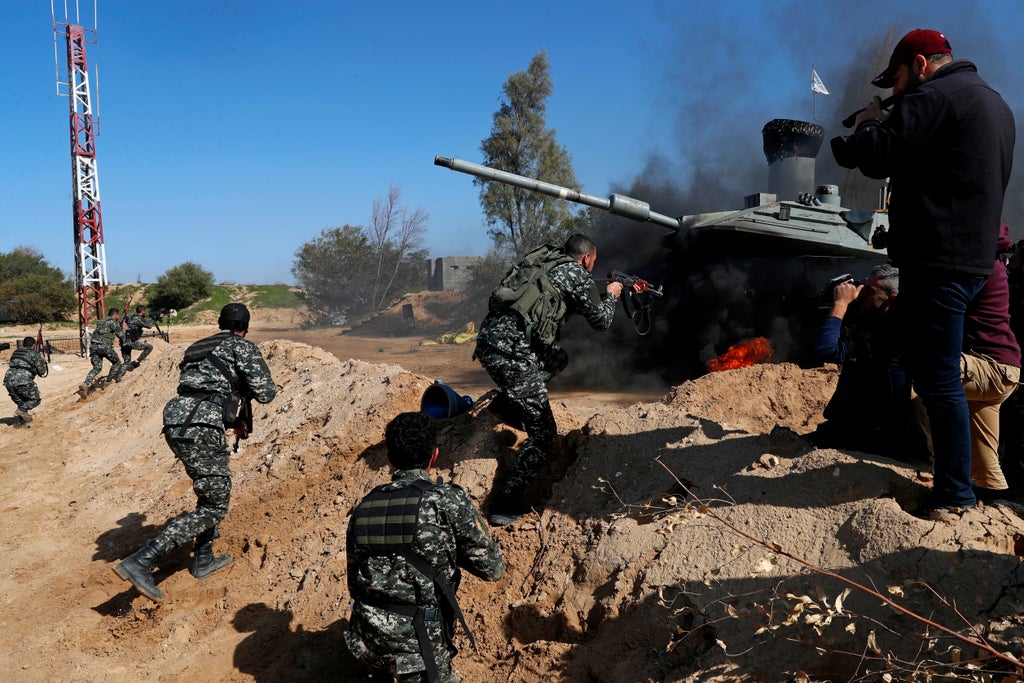 The Palestinian militants scrambled out of the tunnel and attacked an Israeli tank in broad daylight as gunfire and explosions echoed across the Gaza frontier.

This time it wasn’t the start of another war, but an action scene filmed for a TV series produced by the territory’s militant Hamas rulers.

The 30-episode series, titled “Fist of the Free,” presents the fighters as scrappy heroes outwitting a better-armed Israeli military. Unlike “Fauda,” the hit Israeli drama that deals with some of the same subject matter, it is unlikely to get picked up by Netflix.

It’s the latest such production by the media arm of Hamas, which has invested heavily in its offerings despite a crippling Israeli-Egyptian blockade on Gaza since the Islamic militant group seized power in 2007.

The shows are aired on Hamas-run TV, and “Fist of the Free” will debut during the upcoming holy month of Ramadan, when viewership soars after the dawn-to-dusk fast and networks across the Muslim world debut big-budget offerings.

“The idea of ​​our films and series centers on our struggle with the enemy,” says Sadi al-Attar, the assistant director. He says the latest show is a response to “Zionist aggression.”

The storyline centers on a real-life botched Israeli raid in Gaza in 2018. An undercover unit disguised as Palestinian aid workers aroused suspicions in a town near the border. When their cover was blown, a gun battle ensued in which seven Hamas fighters and an Israeli commander were killed.

In real life, the undercover unit was detected by local residents, the death toll was lopsided and Israel successfully evacuated 16 undercover agents. In the dramatization, Hamas brilliantly outwits the Israelis and scores a major victory.

Al-Attar rejects any comparisons to “Fauda,” which centers on an undercover Israeli unit that poses as Palestinians and conducts daring raids against militants. That series presents complex characters confronting moral tradeoffs, but has been criticized for its far-fetched plot twists and for reducing Palestinians to the bad guys in a cop drama-like shoot-’em-up.

“We are not responding to them in their Fauda program,” al-Attar said. I have acknowledged having watched a few scenes of the Netflix thriller, calling it “lying and misleading.”

Hamas and Israel have fought four wars and dozens of more limited skirmishes over the years. Israel and Western countries view Hamas as a terrorist group because of its long history of attacks on Israeli civilians. Hamas, which won Palestinian parliamentary elections in 2006, portrays itself as the “resistance” to military occupation, a view reflected in its media productions.

The group has produced seven series and several movies centered on the conflict, most of them aired on its Al-Aqsa satellite TV network during Ramadan.

In 2017, it built an entire movie set based on Jerusalem’s Old City, including a replica of the Dome of the Rock — part of a holy site that is sacred to Jews and Muslims and has been a persistent flashpoint for Israeli-Palestinian violence.

Al-Attar declined to say how much was being spent on the latest series, which he said was funded by donations.

There were no cranes on set, so overhead shots were taken by drone or by a cameraman sitting on another man’s shoulders. Crew members used their camera batteries to detonate mock explosives. The filming took place at a Hamas military base near the border.

The cast is recruited locally, from a population that has had little contact with Israelis since the Hamas takeover and the tightening of the blockade.

Zohair al-Bebisi, a 64-year-old who has never set foot in Israel, was cast as David, an Israeli commando tasked with sneaking into Gaza to recover high-tech equipment captured by wily Hamas militants.

“It’s the first time I play the role of an Israeli intelligence officer,” al-Belbisi said as he rested between takes. He described his character of him as “very cunning,” with a knack for getting out of dangerous situations — until his luck runs out.

The propaganda goes largely unchecked inside Gaza, where Hamas does not tolerate dissent. Since taking power in 2007, Hamas has jailed journalists and activists, banned newspapers, shuttered rival TV stations and restricted movie screenings.

Its rivals in the internationally recognized Palestinian Authority, which is confined to parts of the Israeli-occupied West Bank, have also cracked down on dissent.

Hamas is hoping to gain a wider viewership of its latest production, offering the rights for free to channels in Syria, Lebanon, Algeria and Turkey. But it will struggle to break through the Ramadan lineup, when production houses across the region crank out top-quality dramas with marquee actors.

But al-Attar says they wouldn’t take a meeting with Netflix even if it was asked, because the streaming service “is biased toward the occupation.”