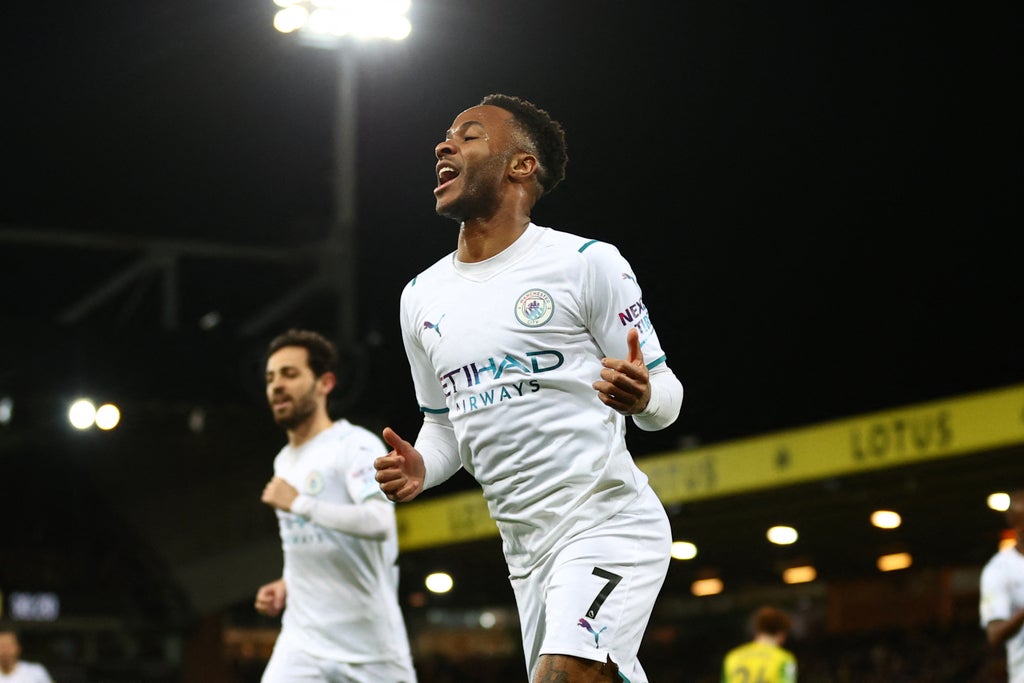 A 4-0 win, as expected and unspectacular as they come, has reestablished Manchester City’s 12-point lead at the top of the Premier League. One that prolongs their unbeaten run to 15, extending their near-faultless record away this season to 10 wins and two draws. Along with momentarily halting Norwich City’s resurgence from the depths.

The visitors rarely seemed to break sweat, apart from a frantic opening 20 minutes that you just knew would not last. Raheem Sterling’s hat-trick was the center-piece, which included the opener and the full stop. Phil Foden got the other, though he too could have had more.

After an uncertain start to the season, Sterling has made the most of a clearer run in the side recently. Manchester City made five changes from the side that beat Brentford in midweek, but Sterling was part of an unchanged from three with Foden and Riyad Mahrez. And with a smart drop of the shoulder and curl into the far corner, an academic finish from a few yards out and a late rebound of his own missed penalty, he moved to 12 goals in all competitions. That now makes it eight-along with two assists – in his last seven league appearances against Norwich. He has, more importantly, moved to 106 Premier League goals, overtaking Didier Drogba on that list.

Even with the sense of inevitability to this result, Norwich started well enough to elicit a few grimaces from Pep Guardiola. They unsettled the defending champions with confident streaks through the middle that have typified their upturn in form under Dean Smith. Their relegation candidacy has been upgraded from “definitely” to “probably”, sitting a point behind Newcastle – albeit having played a game more. What confidence they exhibited this evening very much the result of two wins and a draw in their last three league games, earning them just one point fewer than the previous 12 coming into this fixture.

Milot Rashica looked particularly unperturbed by the stature of those against him, causing Ruben Dias enough trouble for the centre-back to take a yellow card for a cynical foul on the forward as early as the 17th minute. Moments later, Grant Hanley had struck the foot of the post, with Ben Gibson close to turning in the rebound had Fernandinho not nipped ahead and cleared. Teemu Pukki also had a sighter on goal, with a shot from an acute angle straight at Ederson.

The problem, however, that for every opening the hosts managed, Manchester City had two. And there was an inevitability to the opener which arrived in the 31st minute. Raheem Sterling, who had previously been foiled by the feet of Angus Gunn, beat the goalkeeper with a whipped strike into the far corner. Replays showed a slight nick off defender Max Aarons, who was desperate to make up for his botched swing at Kyle Walker’s initial driven cross.

Of course, no one really could really judge Norwich for how the first half turned out. Survival was never going to rest on how they do against the league’s big hitters, which is all the better given they travel to Liverpool next weekend. And after going ahead, the league leaders were expected to hold on, something which was confirmed as early as the third minute of the second half. Not for the first time, Ilkay Gundogan hadn’t been picked up as he was left free on the left byline, entered the box and crossed for Foden, who first kneed straight at Gunn before using his strong, nimble feet to hold off Gibson and force the ball over the line.

Nevertheless, those in yellow and green continued valiantly, ever willing to press though clearly losing a bit of enthusiasm with every casually stroked pass. Even Emerson felt comfortable enough to have a go in midfield, coming out to intercept a through ball midway inside his own half, realizing he had time and taking four superfluous touches before offloading to a nearby teammate and getting back in his box.

Nathan Ake should have made it three when clipped the top of the bar from inside the six yard box after Fernandinho had flicked on a corner at the near post. Sterling then did from a similar position after Dias unselfishly headed across goal off Foden’s deep cross.

With 20 minutes remaining, there was every chance of a repeat of the 5-0 scoreline at the Etihad. Manchester City, however, were more than happy with how things were. Silva and Foden were replaced by younglings James McAtee and Liam Delap, while Kevin De Bruyne, Rodri, Joao Cancelo, Aymeric Laporte and John Stones kept their tracksuits on.

The fourth, arriving as the clock ticked over 90, was meek. Delap broke into the box and was shouldered over by Hanley. Referee Andre Marriner felt it enough for a penalty. Sterling registered another miss from the spot, as Gunn guessed right with a smart dive to his left. Fortunately for him, the ball ideally rebounded back to Sterling’s left foot to complete a perfect hat trick.