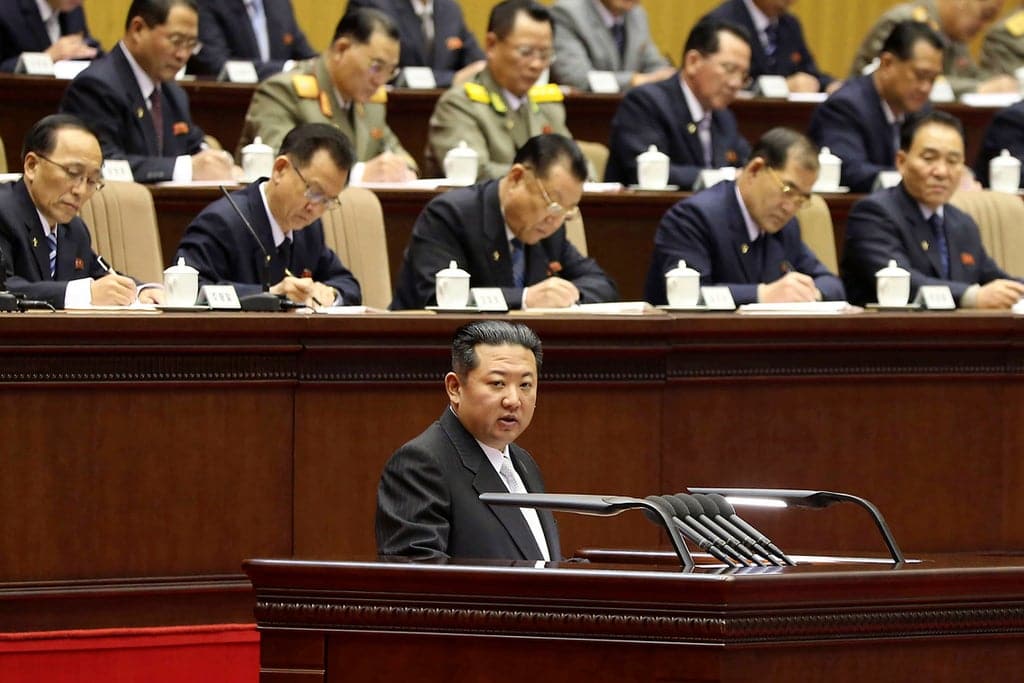 North Korea’s launch of its first intercontinental ballistic missile in five years has enflamed tensions in the region, with South Korea responding with its own set of live missile tests.

Pyongyang launched an apparent ICBM up to an altitude of some 6,000km before it plunged down into waters inside Japan’s exclusive economic zone.

It is the first such North Korean launch since 2017, after which a spring of diplomatic summits between Kim Jong-un and Donald Trump led the former to declare a self-imposed moratorium on ICBM and nuclear tests.

The prospect of a diplomatic breakthrough has since dimmed. The White House, as well as neighbors Japan and South Korea, condemned today’s launch.

South Korea called it a “clear violation of UN Security Council resolutions” and test-fired a volley of its own smaller ballistic and air-to-ground missiles to demonstrate — it said — that it has the “capability and readiness” to strike targets in North Korea if necessary.

Army says North Korea’s test not immediate threat to US

The United States Indo-Pacific Command (INDOPACOM) has issued a statement, saying the launch of the banned missile did not pose an immediate threat to US territory or personnel, or its allies.

But it called on North Korea to refrain from further destabilizing acts.

“We are aware of the DPRK’s ballistic missile launch today and are consulting closely with the Republic of Korea (ROK) and Japan, as well as other allies and partners,” it said, referring to the North by its official name.

“While we have assessed that this event does not pose an immediate threat to US personnel, territory, or that of our allies, we will continue to monitor the situation closely. “The United States remains prepared to defend the US homeland and our allies. The US commitment to the defense of the ROK and Japan, remains ironclad,” it added.

The US on Thursday condemned North Korea’s test of a long-range ballistic missile as a brazen violation of UN resolutions.

“This launch is a brazen violation of multiple UN Security Council resolutions and needlessly raises tensions and risks destabilizing the security situation in the region,” White House spokesperson Jen Psaki said in a statement.

“The door has not closed on diplomacy, but Pyongyang must immediately cease its destabilizing actions.”

North wants to expand nuclear reach over to US: expert

Weighing in on North Korea’s latest provocation, Leif-Eric Easley, a professor at Ewha University in Seoul, said Kim Jon-un’s regime wants to expand its nuclear reach to include the US to “deter Washington from coming to the defense of US allies” .

“The Kim regime is determined not only to keep South Korea hostage to military threats that can evade Seoul’s missile defenses and preemptive strike capabilities; it aims to expand its nuclear reach over the American homeland,” Mr Easley said.

“The effectiveness of existing sanctions is wanting due to lax enforcement by some countries,” he added.

Mr Easley believes that the North would not initiate aggression on the scale of Russia’s invasion of Ukraine, but Pyongyang’s ambitions seem to be to “overturn the postwar security order in Asia”.

“Given China and Russia’s lack of cooperation on the UN Security Council, the US and its allies will likely need to sanction more entities in those countries and elsewhere that are aiding North Korea’s weapons programs.”

The South test-fired an array of smaller ballistic and air-to-ground missiles to demonstrate it has the “capability and readiness” to precisely strike missile launch sites.

The South Korean joint chief of staff in a statement said that the test confirmed the military was capable of a precision strike if needed against the location of any North Korean missile launch and its command system.

North Korea has test-fired a suspected intercontinental ballistic missile (ICBM) for the first time since 2017, South Korea and Japan said.

The projectile, fired on Thursday, landed in the sea 170km west of Japan’s northern prefecture of Aomori and inside Japan’s exclusive economic zone, authorities said.

This was also the North’s 12th major launch this year, amid rising concerns over its weapons arsenal.

The country has test-fired an unprecedented number of missiles since the beginning of the year, drawing condemnation from its neighbors South Korea and Japan along with the United States.

Welcome to The Independent’s live blog on North Korea’s launch of an ICBM for Thursday 24 March.