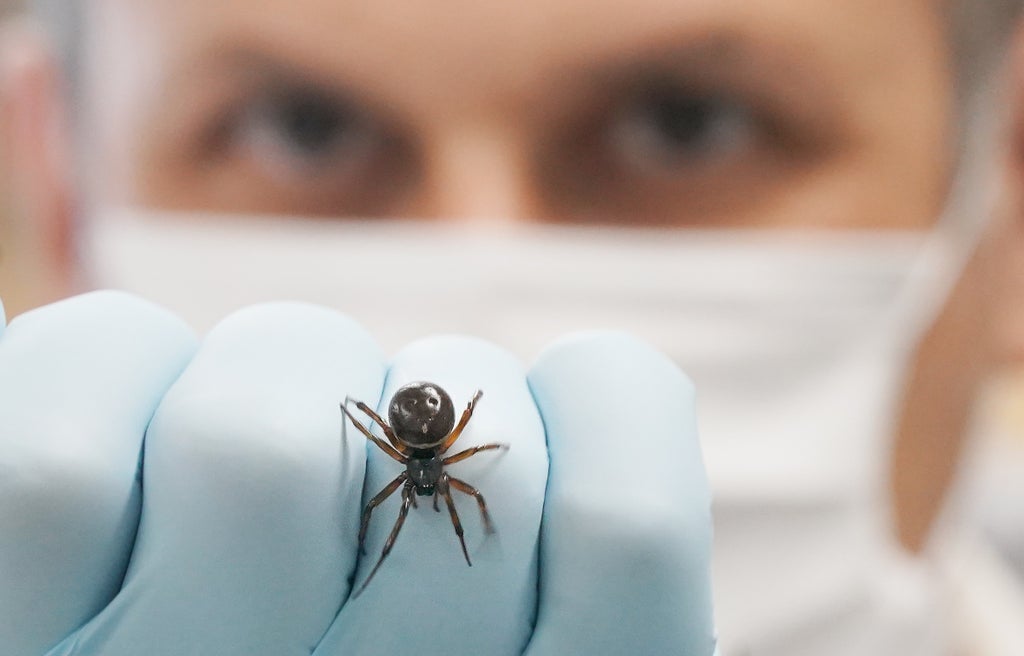 Scientists in Galway have published the first record of a noble false widow spider feeding on a protected species of bat in the UK.

The new study, titled Webslinger Versus Dark Knight, published in the international journal Ecosphere, shows that false widow spiders continue to have an impact on native species.

It is the first time a member of the Theridiidae family of spiders has been recorded preying on a bat anywhere in the world, or any vertebrate in the UK.

The event also marks the first time for any species of false widow spider to be recorded preying on mammals.

The study of the noble false widow feeding off the Pipistrelle bats was published by scientists from the National University of Ireland Galway.

The discovery was made by wildlife artist Ben Waddams at his home in north Shropshire.

On two consecutive days, bats living in the attic were found entangled on the spider’s web below the entrance to the roost.

The first bat, a young pup, was completely immobilized with its limbs pinned tightly to the torso with silk. It was slightly shriveled and discolored from the spider feeding off the remains.

A second, much larger adult bat, was also captured and entangled in the web but as it was still alive, the bat was rescued and released.

In the UK, the Pipistrelle bats are protected under the Wildlife and Countryside Act, 1981, and the Conservation of Habitats and Species Regulations 2017.

The grisly event is not as uncommon as people might expect – three years ago the noble false widow spider was reported feeding on a protected species of native lizard in Ireland.

Originating from Madeira and the Canary Islands, the noble false widow Steatoda nobilis has the potential to become one of the world’s most invasive species of spider.

It was first reported in southern England in 1879 and has increased its range and population density in recent decades, spreading northwards towards Scotland and westward through Wales and Ireland. In that time, the species has also spread globally from across Europe, East Asia, North America, and South America.

The species is known for its medical significance, having the ability to cause a range of mild to severe symptoms in people who are bitten, but little is known about its impact on native species.

Over the past five years, the team led by Dr Michel Dugon in the Ryan Institute at NUI Galway, have been studying a wide range of characteristics specific to the species including its venom, symptoms after envenomation, ecology and behaviour.

Dr Dugon, head of the venom systems lab at the Ryan Institute, said: “We have been working on the noble false widow for the past five years, and have learned a great deal about this species – yet, we are still surprised by its ability to adapt to new environments and make the most of the resources available. It is a truly remarkable species.”

Dr John Dunbar, Irish research council post-doctoral fellow at the venom systems lab, and lead author of the study, said: “In more exotic parts of the world, scientists have been documenting such predation events by spiders on small vertebrates for many years , but we are only beginning to realize just how common these events occur.

“Now that this alien species has become well established in Ireland and the UK, we are witnessing such fascinating events on our very own doorstep.

“Even other, much smaller, species of false widows are known to capture and feed on snakes and lizards. This study presents yet another example of the invasive impact by the noble false widow on native species. We know they are much more competitive than native spiders, and this further confirms their impact on prey species.”

He added: “Although the spider is present in Ireland for over 20 years, we don’t know how impactful it is on the environment and the ecosystem in terms of competing with native spiders or impact on native prey species.

“That’s important as we are starting to get a better idea and understanding on what prey it can manage.

“In this case, bats being vertebrate, the spider’s venom possess a powerful neurotoxin and this enables this to take down vertebrate prey.

“It makes them much more competitive than the native spiders.

“Some of the studies show that the venom of the noble false widow is significantly more potent than the native spiders.”

He said the spider would not consume the entire bat, but instead feed off it until the spider is full.

The spiders possess a fast-acting neurotoxic venom with a very similar composition to true black widows that can cause neuromuscular paralysis in terrestrial vertebrates which allows them to occasionally feed on small reptiles and mammals.

Aiste Vitkauskaite, researcher at the lab, said: “False widow spiders, just as their close relatives black widow spiders, have extraordinary prey capture techniques and remarkably potent venom which allows them to capture small vertebrate prey many times larger than the spider itself with surprising ease.”