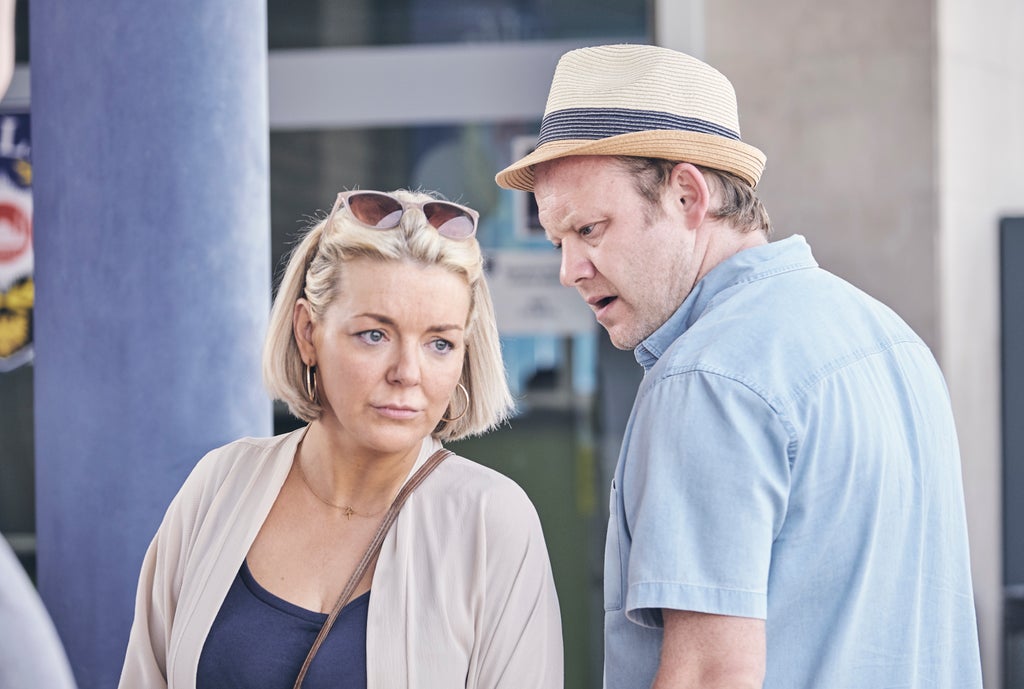 Dealing with sexual assault in the mystery thriller genre involves walking a tightrope. Murder is a safely sanitized act, defanged by the centuries since Poe and Conan Doyle pioneered the form. But there is still an uncertainty about how to create tension with sex crimes. Cast suspicion on the act, and you slip quickly into victim blaming; create a whodunit around the perpetrator, and you end up contorting the realistic facts. After the ratings success of Roll (which ended up way down at the sensationalist end of the spectrum), ITV returns to this tricky genre with no return, written by Danny Brocklehurst. He has just adapted two Harlan Coben novels, Safe and The Strangerfor Netflix, which should be an indicator that his tastes err on the side of pulpy.

In No Return, Sheridan Smith plays Mancunian matriarch Kathy, who flies her family out to Turkey for their “big holiday”. The brood includes her 16-year-old son, Noah (played by Louis Ashbourne Serkis from The Kid Who Would Be King), who, after attending a beach party, is arrested for sexual assault. From that point onwards, the holiday returns into a tortuous traipse through the corrupt Turkish legal system. The set-up is suitably tense, the family’s predicament sufficiently anxiety inducing. But in order to facilitate our sympathies, the show plays a rather tacky bait-and-switch, hinting heavily that Noah’s alleged victim is a young black girl before – twist alert – it’s revealed to be a fellow teenage boy. It feels like an unsubtle shift in the power dynamic, designed to make the he said/he said ambiguity more palatable.

Smith, long one of British television’s most reliable performers, delivers another powerhouse performance as a mother witnessing her family disintegrate before her. It’s a true pleasure to watch her rage, often wine glass in hand, against the impotence of her situation (“I need to do something, I need to bloody do something!”). It leaves her from her husband from her Martin (quiz‘s Michael Jibson) rather in her wake, dealing with his own emasculation. “You wear the f***ing pants, don’t you?” I have observed. “I’m just bloody useless!”

But for all the attempt to meld the light-diffusing cinematography of last year’s breakout hotel hit The White Lotus with sensitive explorations of the fallout of these crimes, like the excellent final series of broadchurch, things never quite coalesce. A particularly bum note is struck by the family’s lawyer Rico (Philip Arditti), who arrives on the scene in a sports car blaring “The Boys Are Back in Town”, and whose dialogue ranges from cliched comedy malapropisms (“Don’t shoot the news bringer!”) to the tonally incongruous (“When I was his age I was trying to stick it in any hole that was available!”). I suspect that ITV won’t be announcing the Better Call Rico spin-off any time soon.

But at least Rico is vaguely involved in the plot. Less useful by far are Kathy’s unhappily married sister Megan (sherlock‘s Sian Brooke) and her horrible husband Steve (Killer Weekend‘s David Mumeni). They appear to be participants in an entirely separate drama about the strains a holiday resort can put on marital fidelity, as Steve visits mysterious local women and Megan fantasises about the resort’s dreamy activities coordinator, Ismail (Murat Seven). “It’s supposed to be our restart holiday,” the irredeemable Steve observes, but it’s hard to give a mote of attention to this draughty relationship when every other scene involves Sheridan Smith tearing around in a beach dress, cracking (metaphorical) skulls and screaming about Turkish prisons.

What, in the end, is the point of No Return? At its best it’s a stellar showcase for Sheridan Smith, but, for most of its runtime, it’s little more than a medley of worst-case scenarios. Ultimately, it has as much to say about the trials of package holidays as it does about the criminal justice system.